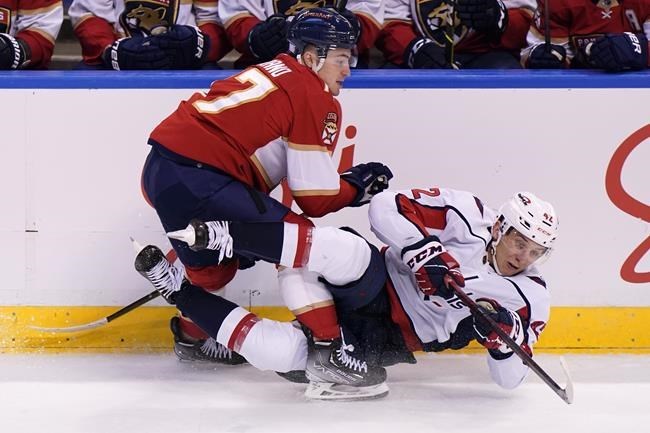 Trailing 4-1, the Panthers scored four goals on a season-high 26 shots in the third period to snap a two-game skid.

Eetu Luostarinen and Ryan Lomberg each had a goal and an assist. Sam Bennett and Joe Thornton also scored goals for the Panthers. Aaron Ekblad had three assists. Sergei Bobrovsky stopped 23 shots and is 8-0-0 at home.

Nick Jensen had a goal and an assist for the Capitals. Lars Eller, Beck Malenstyn and Connor McMichael also scored goals. Dmitry Orlov had two assists, and Ilya Samsonov made 45 saves.

Lomberg’s goal at 3:23 of the third made the score 4-2. Luostarinen scored a shorthanded goal with with about six minutes left in the third to close the Panthers to 4-3. Then Bennett tipped in a shot from Aaron Ekblad that tied the score at 4 with 7:59 left before Reinhart capped the scoring.

The Capitals took a 2-0 lead when they scored two goals by McMichael and Malenstyn 11 seconds part in the first. But Thornton’s goal, an easy tap-in of a rebound, closed the score to 2-1 at 6:55 of the first.

Thornton now has 1,533 career points, tying Mark Recchi for the 12th most in NHL history.

Eller’s backhander that got past Bobrovsky stretched the Capitals’ lead to 3-1 at 6:40 of the second, and Jensen made the score 4-1 on his shot from the high slot with 7:20 left in the second.

Barring a playoff matchup, Tuesday was the third and final meeting this season between the Panthers and Capitals — a very early end to the series. Florida hasn’t even started its season series with 17 other teams, and Washington has yet to play 12 clubs.