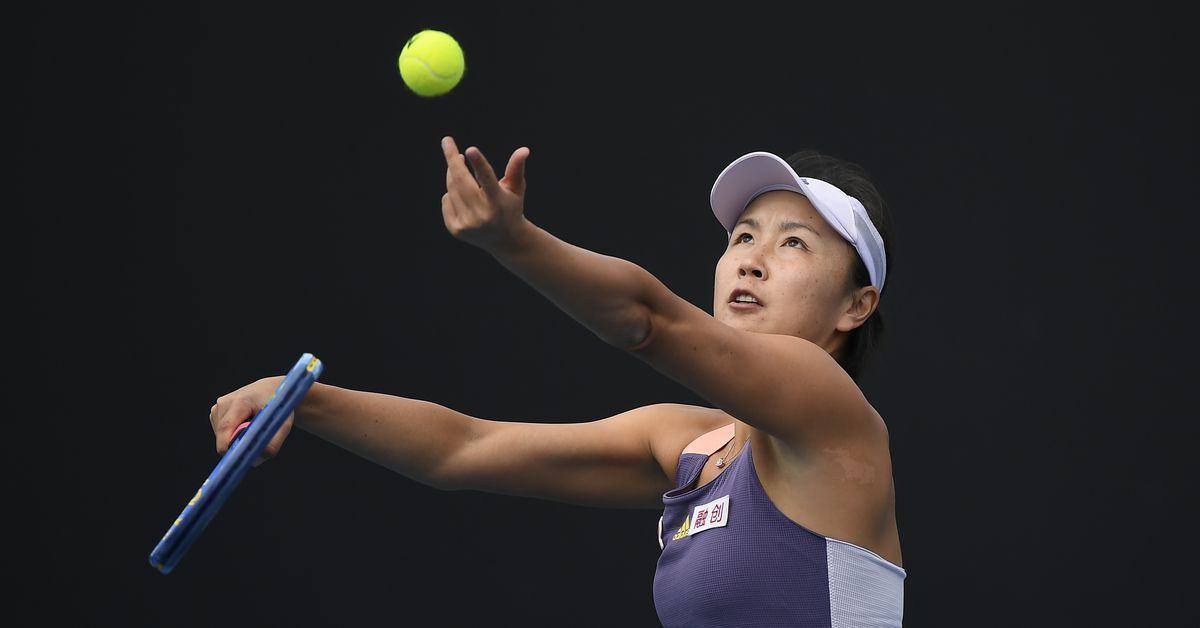 The safety and freedom of Chinese tennis star Peng Shuai have been in serious doubt since the beginning of November, when she accused a powerful former Chinese Communist Party official of sexual assault. But while her case has garnered international attention, it’s far from an isolated incident — and it speaks volumes about the purpose of political disappearances in China, as well as the country’s treatment of sexual assault.

In a November 2 post on Chinese social media app Weibo, Peng accused former vice premier Zhang Gaoli of sexual assault. Within minutes, the post disappeared; shortly thereafter, all mentions of Peng on social media did too. Although she has since reappeared in videos released by Chinese state media, it’s still unclear whether she is safe and able to speak freely, and her case has drawn support from tennis stars like Naomi Osaka, Serena Williams, and Novak Djokovic, as well as the Women’s Tennis Association.

I am devastated and shocked to hear about the news of my peer, Peng Shuai. I hope she is safe and found as soon as possible. This must be investigated and we must not stay silent. Sending love to her and her family during this incredibly difficult time. #whereispengshuai pic.twitter.com/GZG3zLTSC6

In the weeks since Peng’s initial disappearance, China’s response to the international outcry over her whereabouts and ability to speak freely has been alarmingly opaque. Among other steps, Chinese state media released a screenshot of an email supposedly written by Peng to Women’s Tennis Association President Steve Simon, which was meant to assure worried spectators that Peng was “fine” and “resting at home,” but did the opposite. Several dubious videos released by Chinese state media also failed to assure most of the international community that all was well.

High-profile figures have disappeared in China before

Although Peng’s disappearance sparked an international outcry, it’s far from the first time China has disappeared public figures. Fan Bingbing, one of China’s most famous actresses; Zhao Wei, a billionaire and actress; and Jack Ma, once China’s richest man and the head of massive e-commerce site Alibaba, have all disappeared for periods in recent years, only to reappear with little explanation.

Fan, a massive star who commanded China’s film industry and attracted international attention, was held under house arrest for four months in 2018 on charges of tax evasion — a fairly typical practice in China, as the New York Times reported the following year in a profile of the actress. She reappeared, cowed and praising “the [Communist] party and the state’s good policies.”

The disappearances of prominent people who the Chinese Communist Party, and President Xi Jinping in particular, perceive as fundamentally inimical to communist values — either through their outspokenness, as in the cases of Peng, artist Ai Weiwei, and actress Zhao; or their public image, like Ma and Fan — serves as a warning to Chinese citizens. In particular, criticizing the state, its policies, or prominent party members can be dangerous, as in the case of real estate tycoon Ren Zhiqiang, who disappeared last year and was later sentenced to 18 years in prison on corruption charges after criticizing Xi’s response to the Covid-19 pandemic.

Given that context, Peng’s disappearance and peculiar reappearance isn’t exactly a surprise; she is the first known person to publicly accuse a member of the Politburo Standing Committee — Zhang was once the vice premier under Xi, making him part of the highest rungs of power — of sexual assault. According to Lü Pin, a longtime Chinese feminist activist, the disappearance wasn’t so much a warning, but a panic response.

Even though Peng is an international figure, with two Grand Slam doubles titles under her belt and the adulation of the Chinese state because of her successful career, accusing a powerful party member of assault was a massive risk on her part — and seen as an unforgivable transgression against the state.

Her initial message on Weibo, which was quickly taken down, makes it clear she knew the danger of her decision to speak up: “It doesn’t matter if I’m hitting a rock with an egg, or being a moth that flies towards the flame,” she wrote. “I am telling the truth about what happened between us.”

According to a recent piece in Australian outlet The Conversation, “[Peng’s] story directly contradicted the Communist Party’s official narrative of harmonious relations between people and Party. In particular, her allegations contradict the narrative that women, who purportedly ‘hold up half the sky in China,’ enjoy gender equality under this government.”

That narrative, however, isn’t the reality in China. As Leta Hong Fincher, author of Betraying Big Brother: The Feminist Awakening in China, argued in a Washington Post piece in 2018, far from guaranteeing gender equality, Xi’s authoritarian regime in fact depends on enforcing patriarchal norms and depicts him as the head of the “family” that is the nation.

That’s only gotten worse as China’s economic boom of the past several decades slows. According to Hong Fincher, “Chinese propaganda under Xi’s leadership has revived sexist elements of Confucianism, in particular trying to push the notion that a traditional family (based on marriage between a man and a virtuous, obedient woman) is the foundation of a stable government.”

Given that framework, Peng’s decision to speak publicly against the state, pierces the illusion of a harmonious “family” headed by “Xi Dada” — Big Daddy Xi — and exposes devastating family secrets.

“Peng Shuai’s disclosure of being sexually abused by Zhang Gaoli, the former Vice Premiere of the People’s Republic of China, is crucial,” Lü wrote in a November blog post. “Though only the tip of the iceberg, it exposes the real life of Chinese highest cadres, on how their power masked their hypocrisy, and how they are excessively corrupted.”

“Every day, there are victims trying to get attention, but most of them cannot get any attention, and they were censored before people can see them,” Lü said in a phone call with Vox. “That’s sad, but only very few people’s voices could be heard in China, could go beyond the censorship.”

Despite a handful of high-profile punishments for sexual assault, there is a limit to how far the Communist Party will go in allowing a Western-style #MeToo movement to take hold; previously, China has censored the #MeToo hashtag on social media and detained journalist Sophia Huang Xueqin, who has been deeply involved with the #MeToo movement in China, on a charge of “inciting subversion of state power.”

In China, according to CNN, state outlets publish articles saying sexual assault isn’t a problem, despite evidence to the contrary. Only about 43,000 cases of “crimes against women’s rights” were prosecuted between 2013 and 2017, in a nation of 1.4 billion. And Peng’s censorship indicates that, like many Chinese women without her star power, she’ll be unable to tell her story and the accused won’t face justice.

“I doubt that the Chinese government will investigate her accusations,” Lü told Vox over the phone. But, she said, Peng’s case shows the world “the reality of [Chinese] politics”: Though some politicians have been punished by the state for having “affairs,” Lü said, “they never expose the women’s name, and what’s the real experience for them. Were those women raped? Nobody knows.”

Peng’s accusation came just as Xi tightens his grip on power; a resolution on the “correct view” of the Communist Party’s history, passed last month, calls on “the entire party, the entire army and people of all ethnic groups to unite more closely around the Party Central Committee with Comrade Xi Jinping as the core,” according to Agence France-Presse, quoting Chinese state media outlet Xinhua.

The new resolution centers Xi as the ultimate arbiter of Chinese political culture, the state, and the history of China’s Communist Party — elevating him to the level of previous Chinese leaders Mao Zedong and Deng Xiaoping — and attempts to justify his crackdowns on pro-democracy activists, Uyghur minorities, and other perceived adversaries.

In addition to Xi’s own power play, the February Beijing Winter Olympics will give China an opportunity to show its power and wealth on a global stage, portraying the Communist Party as a viable alternative to American democracy, Atlantic Council fellow Michael Schuman writes in the Atlantic.

But Peng’s case throws a wrench in that plan.

While the Olympics will probably go off as planned despite a potential US diplomatic boycott over China’s human rights atrocities, the International Olympic Committee’s response to Peng’s disappearance has heightened scrutiny of the Games and the IOC itself.

In a statement this month from Human Rights Watch, Andrea Florence, the acting director of the Sport & Rights Alliance, criticized “the IOC’s eagerness to ignore the voice of an Olympian who may be in danger and to support claims of state-sponsored media in China.” In a recently introduced congressional resolution, two US lawmakers have also accused the IOC of “collaborating with the Communist Party” in covering up Peng’s accusations and disappearance.

“The IOC has demonstrated yet again it cares more about appeasing the Chinese Communist Party and the Olympics’ corporate sponsors rather than the wellbeing of Olympic tennis star Peng Shuai who accused a top CCP official of sexual assault,” Rep. Michael Waltz (R-FL) said in a statement announcing the resolution condemning the IOC’s actions.

The IOC’s response stands in stark contrast to that of the WTA, which unequivocally suspended a lucrative, decade-long contract to hold professional tournaments in China earlier this month.

“While we now know where Peng is, I have serious doubts that she is free, safe and not subject to censorship, coercion, and intimidation,” Steve Simon, the WTA president, wrote in a statement announcing the suspension. “If powerful people can suppress the voices of women and sweep allegations of sexual assault under the rug, then the basis on which the WTA was founded — equality for women — would suffer an immense setback.”

With such sustained attention on the problem, it’s unclear how long China can keep up the ruse that Peng is fine and able to speak without censorship.

But while Peng’s case highlights a multitude of serious problems in Chinese politics and culture, Lü told Vox, it likely won’t change the political structure.

“It’s extremely hard. Our government is very much powerful; nobody really creates real crisis to them,” she said. ”I think that’s the truth, we should admit that. Even Biden cannot do anything.”

But expecting a case like Peng Shuai’s, explosive as it is, to create systemic change in China, Lü said, is missing the point of the feminist movement. “Our vision is not to overturn the rule of the Chinese government,” she said. “Our goal is to just make women not suffer so much.”