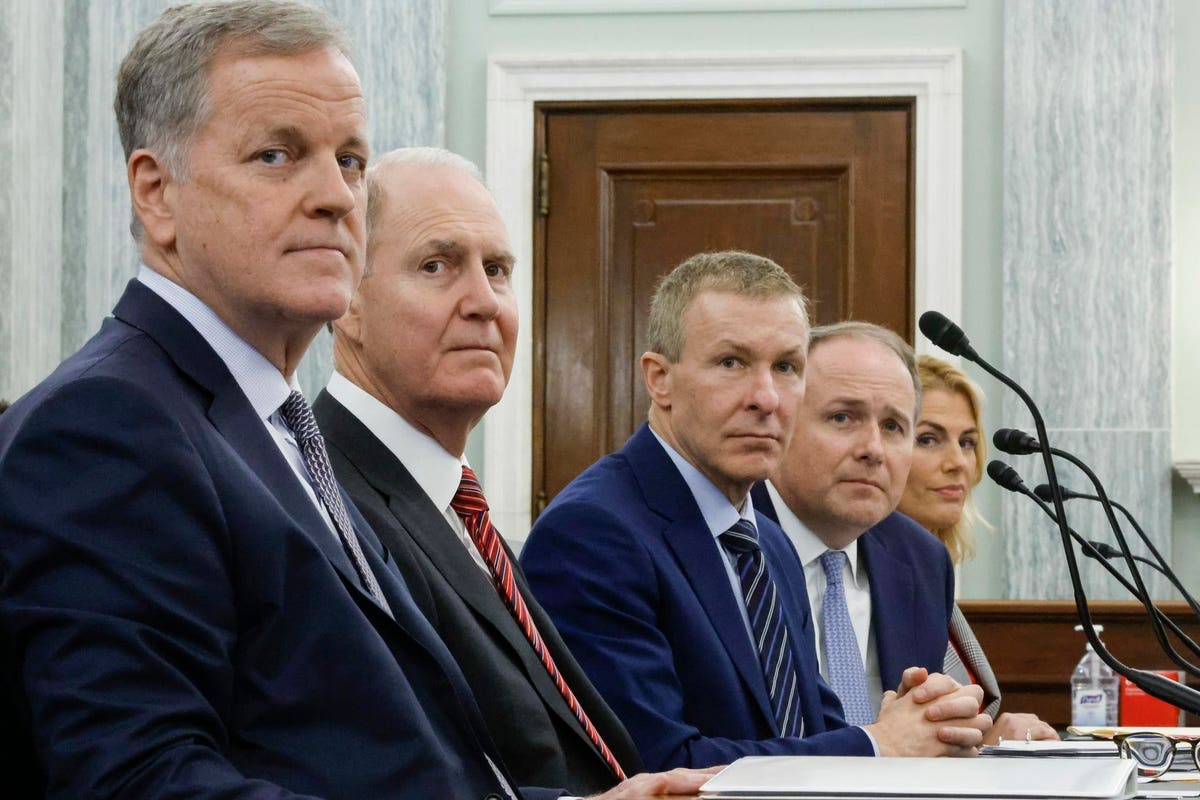 Won’t anyone pity the poor airlines?

They are expected to fly millions of passengers at low prices, enforce endless mask mandates, pay good union wages, pay off multi-billion-dollar loans, keep paying off their junk bonds, and one day, make money for their beleaguered stockholders. The airlines are also being pushed to stop ‘pouring carbon into the atmosphere’ and heating up the planet, even if sustainable aviation fuel costs eight times kerosene. Oh, and they should try to provide passengers a decent travel experience.

Yet last week airline CEOs were dragged before the Senate Committee on Commerce, Science, and Transportation. There they were grilled about how they spent their Payroll Protection money, just for stranding a few hundred thousand people at various airports around the USA.

A headline writer at CNBC put the issue in a nutshell, “Airline CEOs explain flight cancellations to Congress after taking $54 billion in taxpayer aid.” The House panel may have been interested in just how all the taxpayer money spent to keep the airlines flying did not ensure that flights would arrive on time or at all.

Airlines, trying to recover from 2020, when they lost $35 billion and parked 16,000 planes, began operating fuller schedules. After bottoming out in April 2020 with a 95% drop, by summer 2021 domestic flights returned to near “normal.” But a combination of factors led to delays and cancellations. Spirit Airlines cancelled 2,000 flights in one week, stranding thousands. Bad weather, staffing shortages, and computer problems were the claimed culprits. Allegiant, JetBlue and Southwest had over 30% late arrivals, while American had more flights—and more canceled—than other carriers.

Leaders at American, United, Southwest, and Delta told the Senators that the labor market was tight and existing workers balked at taking addition shifts. And they tried to reassure the panel that hiring was picking up after furloughs and voluntary reductions in 2020. Southwest added 5000 workers this year, Delta 8700 and American 16,000, with a goal of hiring 18,000 next year.

Hopefully many of the new employees will be on hand for this year’s Christmas crush. The holiday forecast from AAA predicts 6.4 million people will travel by air between December 23 and January 2—a 184% increase over 2020.

Meanwhile, airline travel is under threat by the newly dominant Omicron COVID-19 variant. The Centers for Disease Control (CDC) has listed 90 countries as “Level 4: Covid-19 Very High” category, including travel favorites like Britain, France, Spain, Portugal and Germany. Other countries perceive the US to have a high COVID rate, so they have restricted entry.

As for the fear factor for U.S. airline travel, 15 seconds on Google found these:

·       “Flying over the holidays? Tips for reducing your Omicron risk”(LA Times)

The FAA, which investigates unruly-passenger incidents crews report to the agency, says the number of investigations has risen more than 500%. In 2020, there were 183 investigations, while in 2021 there were more than 1030. Meanwhile, a long-time American Airline flight attendant is suing the airline over sexual assault allegations.

Giving the airlines even more agita, Senator Dianne Feinstein and Congressmen Richie Torres and Eric Swallwell just called on the Biden administration to require proof of COVID-19 vaccination or a negative COVID-19 test result for all domestic air travel.

“Travel at our nation’s airports has essentially returned to pre-pandemic levels but the risk from COVID-19, including from its new variant Omicron, continues to present a major public health threat,” the members wrote. “Requiring proof of vaccination or a negative test for domestic flights would improve public health and address concerns that passengers have about flying.”

The airline industry has been fighting the demand of politicians to show a negative test, or more recently some form of vaccine passport, for almost two years. The airlines believe that forcing passengers to go through such steps would hurt their fragile recovery.

According to Today, a United Airlines and Department of Defense study found the risk of contracting COVID-19 on commercial flights was low when passengers wore masks for the entire flight. And given the high quality of cabin air with safety measures such as HEPA filters, there is “very low” risk of contracting COVID-19 on board a plane, according to the International Air Transport Association.

Yet millions of people already say they won’t fly. Some cite health or COVID concerns, others ideological reasons ranging from creating pollution to masks, and others simply believe flying can be a hassle and unpleasant experience.

To impose a need for a vaccine card or negative PCR test after two years would certainly be another burden. It might also discourage flying, as many would take it as a sign of government failure to suppress the virus.

To add insult to injury, not only is the newly-dominant Omicron variant causing passengers to cancel (or not book) flights, outgoing Southwest Airlines CEO Gary Keller recently reported he had a ‘mild’ case of COVID. He had testified mask less before Congress, sandwiched in between two similarly mask less airline honchos.

Things are tough all over. Qatar Airlines says it can’t even get a good coat of paint on its Airbus A350 aircraft, according to a recent lawsuit.

The airlines, long put under a microscope for everything from on-board food (or the lack of it) to shareholder value destruction, don’t want or expect pity. Despite today’s packed holiday crowds and the uncertainty of tomorrow’s travel with Omicron, US airlines will keep flying through the storm.