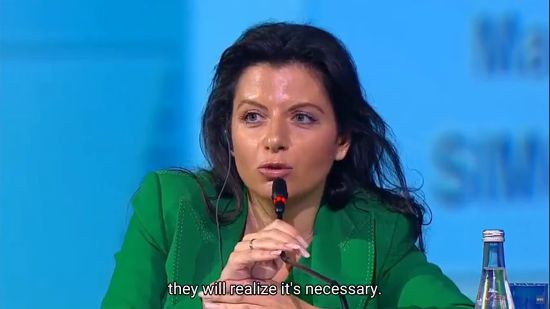 Margarita Simonian has been working for Vladimir Putin for a very long time. She was made the head of Russia Today in 2005 when she was just 25 years old. So basically her entire working life has been propaganda for Putin. Earlier in the day, she claimed that Russia isn’t involved in war in Ukraine or even a “Special Operation” but that there is a civil war in Ukraine, with Russia helping those sympathetic to Russia. That’s how twisted her “logic” is getting.

And later during the St. Petersburg Economic Forum, she may have inadvertently let the cat out of the bag, intimating that Russia is stealing Ukrainian grain for the sole purpose of forcing the West into lifting economic sanctions against Russia. For that, many thousands will starve and die in Africa and the Middle East to appease Russian consumers.

Margarita Simonian said during a speech at the St. Petersburg Economic Forum that people in Russia began to say that “All our hope is in the famine.”

Thus, Margarita Simonian is based on the fact that the embargo on Russian oil and other packages of sanctions will have a boomerang effect on the West.

In other news, the United States and the European Union have called on Russia to open Ukrainian ports to allow the export of millions of tons of grain stored there, helping to alleviate the global food crisis.

Barack Obama’s former ambassador to Russia was less than impressed.

‘Let’s starve them until they agree to be our friends’ Such a pleasant person. And then Russians wonder why no one respects them! https://t.co/umxxbHH1GZ