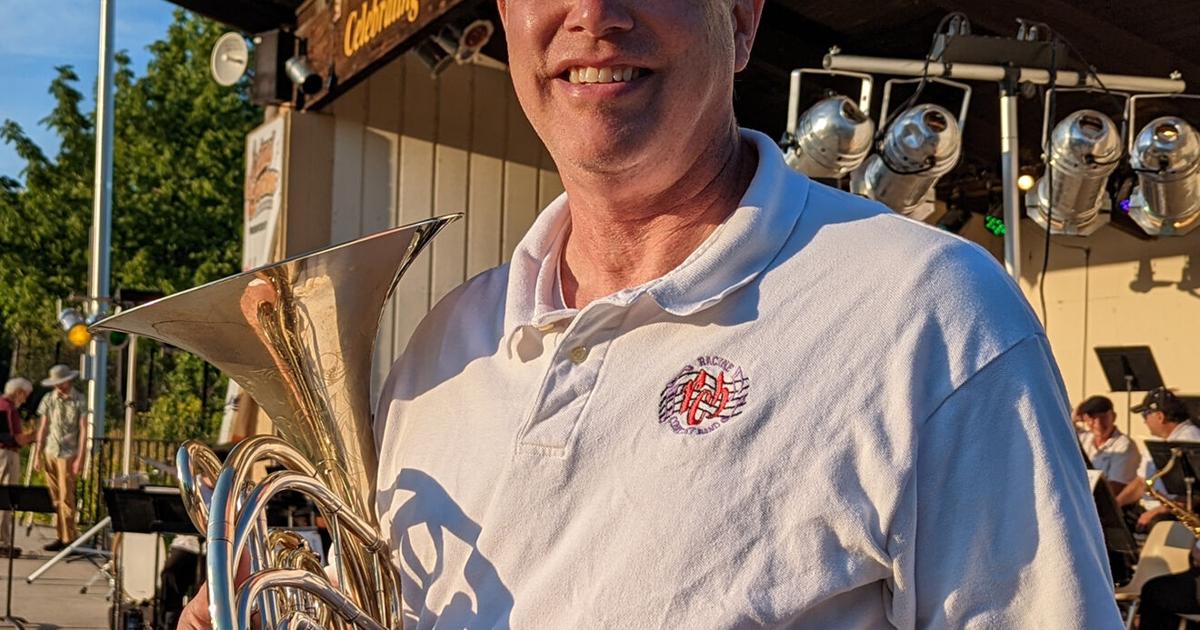 Cardamone is making her ninth appearance as a guest artist with the band.

A graduate of Lawrence University and the Eastman School of Music, the Carthage College coach and accompanist is a frequent performer on professional stages including the Skylight Opera Theater and Milwaukee Opera Theater.

Sunday night, she will sing “Open Your Heart” by French composer Georges Bizet and a waltz by John Philip Sousa, “I’ve Made My Plans for the Summer.” In the song, a woman rejects an admirer, telling him she’s already “made her plans for the summer” — but encourages him to ask again in the fall.

She returns to the stage later in the program to sing “I Dreamed a Dreamed” from Broadway’s “Les Miserables.” The song was a huge hit on its own and has since become a jazz standard. Cardamone is also singing “They Can’t Take That Away From Me” by George and Ira Gershwin. That tune was first performed by Fred Astaire in the 1937 film “Shall We Dance?”

Kenehan is in his second season as a member of the band’s French horn section. This is his first solo performance with the group.

The piece takes its title from Cape Horn, located on the southern tip of South America, where the Atlantic and Pacific Oceans meet. It is known to be particularly hazardous for ships, owing to strong winds and icebergs.

“This piece is hazardous, too,” Kenehan said with a laugh.

Kenehan first learned the French horn in the 1970s and, as a teen in Addison, Ill., he earned a spot with the prestigious Chicago Youth Symphony Orchestra.

After a long break to raise a family and pursue his career, Kenehan “dusted off 35 years of cobwebs” and started playing his horn again in 2018.

In 2021, he founded Horns for Hope, a nonprofit charity, with his instructor and mentor David Cooper, the new principal horn player with the Chicago Symphony Orchestra.

Kenehan “encourages everyone to chase a long forgotten dream. Maybe dust off that old band instrument again and see where it takes you.”

Two more Sousa pieces besides the waltz: “The Fairest of the Fair” and “Washington Post.” “Fairest” is a 1908 march written for the Boston Food Fair. Reportedly, Sousa was inspired by the memory of a pretty girl he had seen at an earlier fair. The “Washington Post” march was written in 1889 for the Washington Post newspaper’s essay contest awards ceremony — and to promote the newspaper’s new ownership. The popular march debuted for a huge crowd on the grounds of the Smithsonian Museum.

“Nocturno for Winds” by Felix Mendelssohn.

“British Eighth” by Zo Elliott. The classic British march was dedicated to the members of Britain’s Eighth Army and accepted on their behalf by Gen. Bernard L. Montgomery, their celebrated World War II commander.

Mark Eichner, celebrating his 20th season as the band’s music director, will conduct the program. Don Rosen, a professional radio broadcaster for 50 years, is the master of ceremonies.