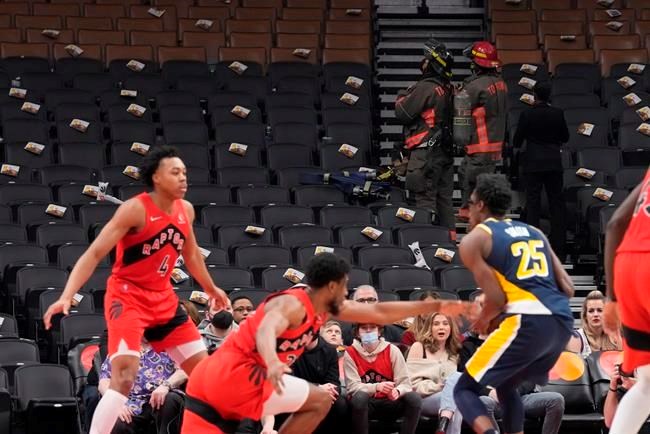 TORONTO — The Toronto Raptors game against the visiting Indiana Pacers on Saturday was suspended for 70 minutes and fans evacuated due to a speaker fire at Scotiabank Arena.

TORONTO — The Toronto Raptors game against the visiting Indiana Pacers on Saturday was suspended for 70 minutes and fans evacuated due to a speaker fire at Scotiabank Arena.

Fans were ordered to leave the building with 4:05 left in the first half, and the Raptors up 66-38.

An hour later, players returned to the court for a 10-minute warmup before finishing the first half. Halftime was to be cut to seven-and-a-half minutes.

A Raptors spokesperson described it as a “small electrical fire” and video showed an overhead speaker on fire above Section 103 in the east end of the arena. The concern, according to the spokesperson, was about the smell and the smoke.

A fire official in a harness hung from the arena ceiling with a fire extinguisher, ensuring the troublesome speaker fire was no longer a danger.

The first sign something was amiss was late in the first quarter when fans in the upper bowl of the east grandstand noticed smoke. A lower-bowl section was evacuated, and then firefighters gathered in the empty section, staring up at the ceiling. Minutes later, another lower bowl section was instructed to leave.

Public address announcer Herbie Kuhn was instructed to turn his mic off for safety purposes for several minutes. He could be heard testing the system multiple times late in the second quarter, but the main speakers above the stands didn’t appear to be operating.

Late in the second quarter, after fire officials gathered with referees and teams on the court, the players headed to the locker-rooms.

The Raptors said tickets will be refunded at point of purchase within 30 days.

The game is key to Toronto’s playoff hopes.

This report by The Canadian Press was first published March 26, 2022.