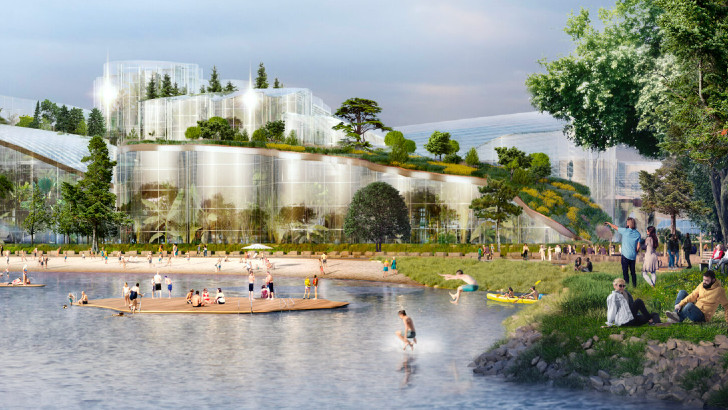 New designs for the future of Ontario Place have drawn some interesting reactions.

The latest revision for the future of Ontario Place to be presented to Waterfront Toronto’s design review panel shows what looks more like an indoor resort than an outdoor public space.

Therme Group, which describes itself as a global wellbeing organization, promises a year-round family-friendly experience “featuring unparalleled, affordable and accessible opportunities to experience fun, entertainment and wellness in an immersive destination.”

“Imagine a place reimagined, unlike any other,” says a video posted on the Therme Canada Ontario Place website. “A place where you can unplug and reconnect. …Explore bio-diverse public parklands, beaches and lakefront trails all set amongst luminescent pools of water …a wondrous and unique wellbeing destination.”

But some people CityNews spoke with question just how accessible – and affordable – it will actually be.

“I just don’t think that a lot of people who actually live here would be able to use it,” said one woman. “I mean most people in the area that I know, myself included, I look at something like that and it probably doesn’t look affordable.”

A statement provided by Therme – the company behind other similar indoor waterparks and spas throughout the world – says the goal is to make Ontario Place a destination for all Ontarians once again.

“We’re creating a new public park, bigger than Trillium Park, with areas for people to walk, run, bike, and swim. It’s going to be a huge draw for families and people across Ontario, and tourists to Toronto.”

Besides Therme Group, the province is partnering with American events promoter and venue operator Live Nation to revamp Budweiser Stage and transform the venue into a “modern, year-round indoor-outdoor live music and performance venue” while Écorécréo Group will build an all-season, affordable, family-friendly adventure park.

The province previously confirmed that the “vision for Ontario Place” will not include casinos or condos, and the land will not be sold. They’ve also committed to maintaining key heritage and recreational features, such as Trillium Park and others.

“There’s absolutely zero place for such a gigantic structure. It’s not an issue of the structure, if the roof is nice or if it has windows or it doesn’t,” he says. “Such a structure does not belong on the waterfront. It should be in another place.”

Mayor John Tory’s campaign responded by saying that Ontario Place is provincially-owned, adding that he has supported the importance of open and green space and equitable access to the water – but wants it to be “spectacular year-round.”

Ontario’s Ministry of Infrastructure has told CityNews that once redevelopment is complete, “the public will have free access to over two-thirds of the site year-round.”

“I feel like it has been a wasted space for many, many years,” said another Toronto resident. “It’s kind of barren, half of it. Half of it’s pretty but they’ve got to do something. I don’t know if a spa is the answer though.”

The provincial government says it has been engaging with the public – six times since last fall – through information sessions, online surveys and a new website, adding there will be more opportunity for people to have their say in the months ahead.