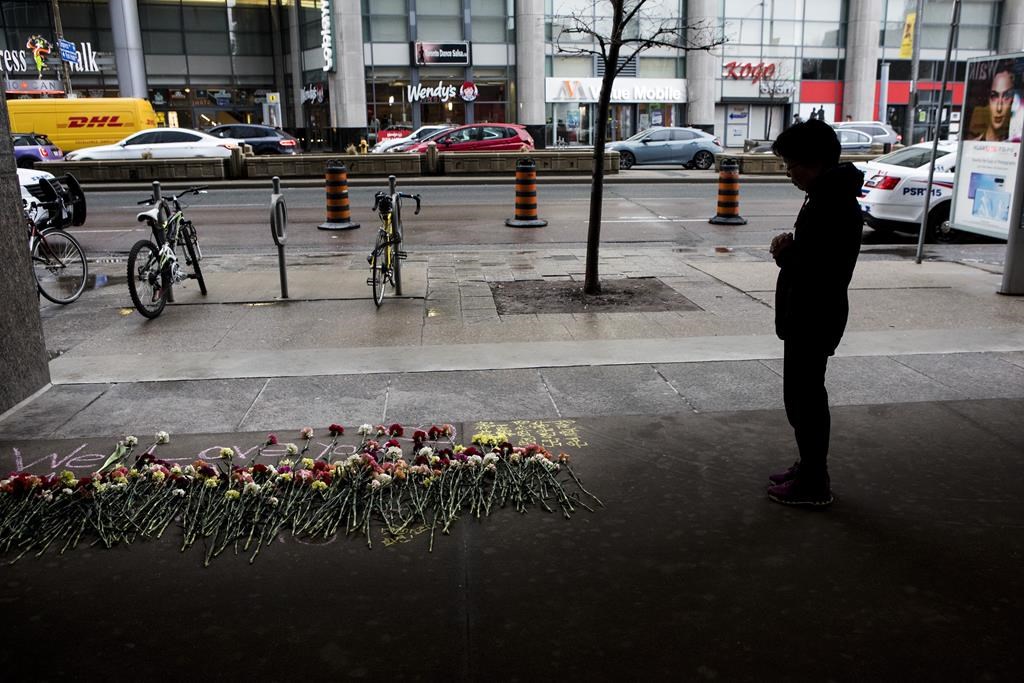 The case against a 28-year-old man responsible for Toronto’s deadly van attack wrapped up last week when he was sentenced to life in prison.

He killed 10 people in April of 2018 and another died from her injuries more than three years later.

Here’s a look at the lives that were lost, based on interviews with family and friends and victim impact statements filed in court.

Betty Forsyth was a walking library, family historian and a good friend to birds and squirrels.

She was born on July 30, 1923, in Peacehaven, East Sussex in the United Kingdom. She left for Canada in 1968, with nine poodles in tow, and remained a loyal servant to the Queen.

Tragedy befell the family early on. Her father, Charles Speedie Forsyth, was a member of the British army and vanished at sea in 1928, near Gibraltar.

But Betty, her quick wit and macabre humour at hand used her missing father as material for family gatherings.

“Was he our real father?” she’d say loudly. “Did mom drive him crazy? Did he jump ship?”

She loved the casino, Coronation Street and a good cup of tea. She hated politics but loved ripping politicians.

After she died, her family and friends brought her back to England.

She is buried next to her mother and brother.

Ji Hun Kim was a 22-year-old student from Korea studying at Seneca College. She was out on the sidewalk of Yonge Street that day she was hit.

She was known to her classmates and professors as June. She was often seen with a smile on her face and as “a force of positivity and happiness.

Sohe Chung and her dog, Coco, became roommates with Ra So in 2015. The two young women met on the first day of school at the University of Toronto and instantly became best friends. So said Chung was her platonic soulmate. Chung was funny, mature and a “human dictionary.”

Chung worked as a sales associate at Holt Renfrew with Sheena Tan.

“Being in an industry full of jealous and fake people, Sohe stood out like a bright shining light, always kind, gentle and warming anyone with her genuine smile,” Tan wrote. “She was a smart, ambitious and respectful girl, with a bright future ahead of her.”

Another colleague, Dianne Sullivan, started a movement she called “the Sohe effect,” to keep her traits alive by being kinder, more patient and less critical.

Gerry Brady taught her daughter, Janice Kirby, to think the best of people, along with patience and understanding. The pair spoke two-to-three times daily.

Brady grew up in the area, living with her husband on Hounslow Avenue for over 60 years. She had beautiful white hair and noticeable scars on both legs, her daughter said, where doctors had taken bones to reconstruct her bottom jaw after she got cancer.

Brady’s mother also suffered trauma at the same age, 83. She was brutally beaten and raped in her own home in 1994 and the crime still has not been solved, Kirby wrote in her victim impact statement.

Kirby retraced her mother’s steps that day. Brady went to the Bank of Nova Scotia and took out $200. Three birthdays were coming up, including Kirby’s, and two of her grandchildren. She had already signed the cards; they only needed money to be slipped into them.

She then bought diapers for her great-grandson, dropped them in her car and started walking to the Bank of Montreal to pay some bills.

Kirby planned to stop by to see her mom after work that day – she would usually pop by if she was in the city.

Brady usually napped around 2 p.m. but wasn’t answering her phone. Kirby went to her mother’s home and found her car gone. Half a cup of tea sat on the table.

Eddie Kang was with his wife for nearly 20 years, and together they built a life in Canada. The pair came together from Korea. He worked as a cook at Copacabana Brazilian Steakhouse in Toronto.

He brought joy to the restaurant with his “daily happiness,” bright smile and a passion for cooking.

His wife, So Min Kim, wrote in her victim impact statement that she remains lost without her husband.

Anne Marie D’Amico lived with a lighthearted spirit that could make a room come apart with laughter.

She got a job as a summer student at Invesco years before and worked there until the day of the attack. D’Amico had just completed a data analytics course and earned 97.5 per cent on the final exam, her mother told court.

D’Amico was a thrill-seeker who skydived in the Swiss Alps, ziplined through the Italian mountains and participated in the famous cheese-rolling race on Cooper’s Hill in England.

She had a black belt in taekwondo, played softball and hustled, for fun, anyone who thought they could beat her in pool, her family said.

“Some of her greatest hits were: ‘Lady in Bed’ to the tune of ‘Lady in Red’ after my aunt took a serious fall on black ice and was bedridden,” said her sister, Frances D’Amico, in court.

D’Amico’s family launched a foundation in her name to help women and children live free from violence.

Munir Najjar was born in Salt, Jordan, on Dec. 10, 1932. He spent his school years at the Latin Patriarchate of Jerusalem until the Palestinian exodus in 1948 when the family moved back to Jordan to finish high school.

He went to university in Baghdad and then emigrated to the United States. His career took him to Libya then back to Jordan.

He and his wife Lillian were married for 54 years. The pair did everything together: cooking, playing cards, and watching television.

Munir took care of his wife, bought the groceries, paid the bills and fixed everything around the house in Amman.

Their children would both emigrate to Canada. Munir loved taking trips with his family to Montreal, Niagara-on-the-Lake and Niagara Falls.

In March 2018, the pair travelled half a world away to spend two months with their kids and grandchildren.

And he lived with a “que sera sera” attitude.

“He saw beauty in everything around him and he appreciated all the little things that most people take for granted,” she said.

He called his daughter every day, urging her to explore Canada, a country she moved to just the year before.

“Munir was a loving man who believed there was beauty and goodness in everyone and everything,” his son, Omar, said.

Dorothy Sewell enjoyed going for long drives with her best friend and sister Joan Begg. The two would also drive around to look at Christmas lights.

They lived for sports, watching the Toronto teams play while on the phone with each other.

“We cheered our teams on as if we were at the arenas,” Begg told the court in her victim impact statement.

“Our families knew the lines would be busy for the duration of the events.”

The sisters spoke on the phone each morning, laying out their days, then reported back later on to let each other know they made it home safely.

The pair also had a bucket list. They managed to walk along the outer rim of the CN Tower, but other items remained undone.

Andrea Bradden had a smile that “could light up any room,” her friends say.

She was set to become a godmother the month after the attack to her two-month-old nephew, her brother’s child. Her sister was pregnant and Bradden would soon be the cool aunt to five nieces and nephews. She spoiled those kids, her sister-in-law Adrian Knafelc wrote in a victim impact statement.

“She was the person who gave extra generous gifts, who took time to help plan out parties, make centrepieces, and bring flowers, extra balloons,” Knafelc said.

Bradden had recently finalized her divorce and had gone on a lunch date as she slowly entered the dating world again.

“It pains me that she will never get her second chance at love,” said her sister-in-law Adriana Knafelc.

She loved her dog Jimmy and planned to travel to New York City the following month with her friend, Michele Kellman.

“She had so much of her life still ahead of her, perhaps to wed again or have her first child,” Kellman said.

Renuka Amarasingha came to Canada from Sri Lanka in 2010 with her husband in an arranged marriage.

Soon after she went to a police officer at 43 division in Scarborough looking for help. She was five months pregnant and being abused – physically and emotionally – by her husband, said police officer Laura Middleton in a victim impact statement filed with the court.

Amarasingha returned to school until graduating in 2015 while she raised her son by herself, Middleton wrote. She had just landed a job with the Toronto District School Board.

“Renuka is one of the bravest women I have ever met,” Middleton wrote.

Every May, Amarasingha would hop on the bus with her boy and trek to the police division’s open house to thank everyone who helped her.

“She was an inspiration, and her courage and influence over my own life and career is something I deeply regret not expressing to her more than I did,” Middleton wrote.

“To me, Renuka is the definition of ‘hope.’”

Renuka’s boy filed to court a drawing of him and his mother together under a beaming sun, both smiling.

Tesfamariam was born on March 12, 1956, in Ethiopia, the third oldest of four brothers and five sisters.

She became an elementary school teacher and in the 1980s moved to Eritrea to be with her parents, who had moved there earlier.

When the Eritrean-Ethiopian war escalated, Tesfamariam left for a new life in Canada. She settled in Montreal, where she lived for nearly a decade.

She struggled to find meaningful work in the city, bouncing from job to job, and eventually moved to Toronto in search of new opportunities, her family said.

In 1999, at age 43, Tesfamariam went back to school to become a nurse. After graduation, she went to work in a long-term care home in Toronto.

She suffered catastrophic injuries in the attack, leaving her paralyzed from the neck down and requiring a ventilator to breathe. Doctors told her family she might only survive a few weeks.

Tesfamariam lived in two hospitals for more than three years.

She never did. She died of her injuries in October 2021.

Her family brought her body home to be laid to rest in Asmara, Eritrea.