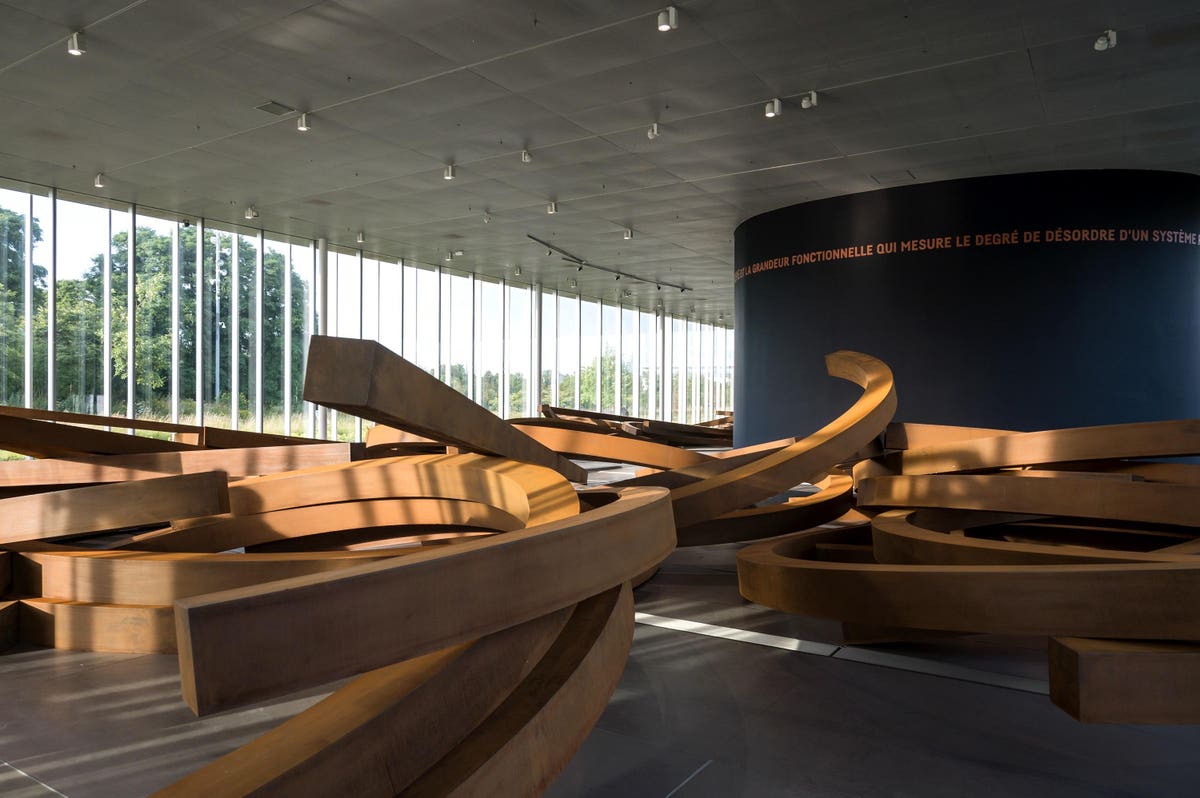 Bernar Venet, one of France’s greatest living artists – known for his 2011 Chateau de Versailles solo show and his 60-meter-tall sculpture, Arc Majeur, in Belgium considered the world’s tallest public artwork – discusses his Collapse masterpiece in the factory building of his own Venet Foundation in the south of France and his current exhibition The Hypothesis of Gravity held at the Louvre Museum in Lens, France, until January 10, 2022, where 110 Corten steel beams explore concepts of disorder, entropy, gravity and uncertainty.

Describe the Collapse sculpture-performance you carried out at your foundation in Le Muy last summer.

On July 17th of this year, I carried out a Collapse of 30 five-meter-tall Arcs in the big enclosed space of the factory in Le Muy, an action thus instantaneously generating a 30-ton sculpture. I was thinking more about creating a sculpture than an artistic performance because for me it was first and foremost a question of creating a work that obeyed new principles within the context of my work, certain possibilities to which I am currently attached: instability, disorganization, the unexpected, among others. It is true that the gesture, the method of creation, is spectacular and that on that day I had an audience invited to attend the event. That’s why my gesture was mostly interpreted as a performance, a very brief performance since it lasted only three or four seconds.

Tell me about the element of unpredictability that’s part of this artwork.

With the help of a forklift, I pushed this group of 30 Corten steel arches, lined up in such a way that, like dominoes, they would collide one after the other and end up collapsing on the ground a few meters from the spectators. I had previously done some tests on a model and I didn’t think that a steel bar could be deflected and touch someone dangerously, but some people in the audience guessed my concern because nothing was totally predictable. The very spectacular, powerful and brief gesture took place with a deafening noise: 30 tons of steel collapsing in a red cloud of rust dust…

Did the outcome live up to your expectations?

There was a slight jostling among the spectators, but the result, the presence of these intertwined arcs, torn for some, lying on top of each other in a very disorderly manner corresponded, on the whole, to what I expected. The deliberately different dimensions of the arcs had created enough inequalities so that the work was not too regular throughout its length. I got exactly what I had wished for: the sudden disintegration of an aligned set of Arcs perceived as a constitutive, organizational passage of a new form and towards a new state of stability.

What’s the significance of holding a solo show at the Louvre-Lens?

I can say it like this, and all artists think so: there is first of all the symbolism of the word “Louvre”. More than any other museum in the world, the Louvre embodies the idealized image of this paradise where all the greatest artists in history meet forever. Cezanne, the first, was well aware of this when he said that he would stop painting immediately if his work never had access to the Louvre. The Louvre is the image of a dream. To enter it is the fulfillment of this dream. To remain there is an enormous challenge, not easy to merit it. Let’s say that it is the final test, for the happiness of the chosen ones, the last judgement in a way, of which only time constitutes the jury.

How did the idea to exhibit at the Louvre-Lens come about?

The Louvre-Lens is a sublime horizontal extension of the Parisian palace, all in architectural finesse, where Kazuyo Sejima has built a space that allows a masterly staging in the Gallery of Time. I discovered it in 2018, invited by Marie Lavandier, its director. I was dazzled that day when I entered the Glass Pavilion. She explained to me that it was intended for temporary exhibitions of living artists. I quickly understood during the conversations that followed that a good project of mine would be welcome and that we would talk about it at our next meeting.

What was your initial idea for the exhibition?

I had many ideas because a place like this stimulates your imagination. But my experience taught me all the constraints related to the installation of heavy, bulky and voluminous sculptures, problems of access and movement inside a museum and questions related to security. The obstacles are usually multiple when one is confronted with a place of this importance, almost new, and where the least accident can take on a disproportionate dimension. The floor is impeccably maintained in this pavilion with walls about 10 meters high, made of transparent glass. Obstacles, yes, but obstacles quickly put into perspective by the determination of Marie Lavandier, who immediately encouraged me to carry out what seemed to me to be the ideal gesture for this place. A strong gesture was possible: it was necessary to imagine it and to make it a reality.

What were the technical difficulties involved in installing the exhibition?

With the help and great professionalism of my friend, the transporter Pierre Garrone, who has installed my most demanding works for more than 30 years, it seemed possible to us to create a very big Collapse over 1,000 square meters by taking up the entire space of the Gallery of Mirrors, and to occupy the external park in which 10 groups of leaning Arcs would be installed. An enormous logistical work was now going to take into account the transport of more than 150 tons of sculptures from the south to the north of France. Several tractor-trailer trucks would be necessary, huge cranes and telescopic forklifts to install in the best possible conditions each element of my two installations. Also, 140 large stainless steel plates had to be provided to protect the ground from shocks during the potential fall of the steel bars in their often too precarious balance. It took us four long days to install this Collapse with the Garrone team and my assistants who came especially from Le Muy.

What were the greatest challenges?

It was physically demanding work that required a great deal of concentration to avoid accidents because each element which weighs approximately one ton was installed, often in conditions of not very favorable instability. We can be the victims of unforeseen falls when imbalances have not been anticipated… all sorts of events that we do not control but which have the advantage of creating surprises and offering the viewer richer configurations than those we had imagined.

Did you know from the start what the end result would look like?

During the development of a similar installation, it is impossible to visualize from the beginning and even during the assembly the result that one will obtain. Yes, I give instructions on the positioning of each element, and yes, the randomness is far from being absolute, but I let these elements arrange themselves according to the possibilities offered in a configuration that’s always yet to come. This final heap, this extreme and totally irreversible disorder, obeys more the laws of gravity than my limited orientations made up of uncertainties.

You had previously displayed other oversized Collapses in Le Muy…

In 1994, I made a large model in which I presented a disorder of lines composed of Arcs, Angles, Straight Lines and Indeterminate Lines. Impossible to make it a reality in an ideal size at the time because I did not have enough elements in large dimensions available, I could nevertheless show in various places what I call “Collapses”. The most voluminous was created for the first time in 2014 in Le Muy, in the large factory space, with 200 tons of Arcs, whose configuration I changed each year that followed. Less voluminous Collapses were sometimes presented in different places: in Venice, Versailles or Dunkirk, for example, at the Gigantism exhibition in 2018. But these were always works that could be perceived globally at a glance, as with a sculpture around which one can turn easily. The Louvre-Lens was therefore for me the ideal opportunity to finally present an important Collapse to a large public outside Le Muy. Composed of Straight Lines, Arcs and Angles, it was big enough that one could not apprehend it with a single glance and it became possible to move inside it, even if all these intertwined elements did not make the access easy.