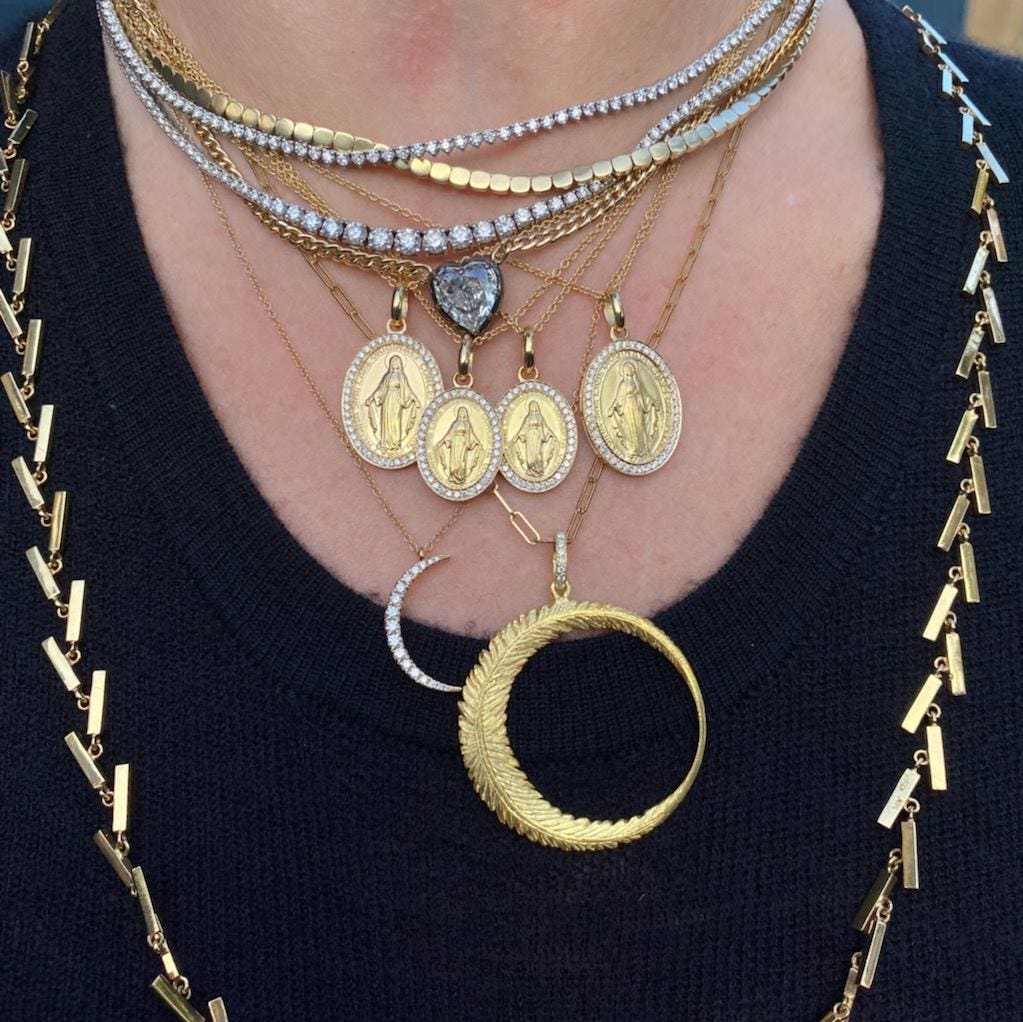 While fine jewels are treasured by those who wear them, and appreciated by those who view them, jewels glow especially bright while their shimmer delights during the short, dark days of winter. As Winter Solstice (the shortest day of the year) is here on December 21st, this writer is shining a light on independent jewelry designers and the L.A. boutique that champions their dazzling and rare creations: West Hollywood’s ROSEARK.

Founded in 2003 by Kathy and Rick Rose, ROSEARK is curated by Creative Director Kathy Rose, who also collaborates with select designers on exclusive, limited edition pieces for her boutique. Hidden behind high hedges and an electronic security gate, the fashionable fortress of ROSEARK is situated in a wood-floored house that’s filled with curated rooms of fine and rare jewelry. Open only by appointment, Rose and her team also work one-on-one with stylists who source jewels for entertainment industry stars like Miley Cyrus and Alanis Morissette, along with globally beloved actors like Kristian Nairn, who plays Hodor on Game of Thrones and is also a progressive house/trance DJ. In between examining some of ROSEARK’s most radiant pieces, including poetic jewels from the Los Angeles-based brands Queen Vee, House of RAVN by Angela Kroeger, plus One Moon Cashmere x Kathy Rose, this writer and Rose discussed how to celebrate Winter Solstice.

“Without a doubt, Rose noted, “It’s been a tough year for all of us, so take some time to meditate every morning to focus on the good that you can do, and the things that you are grateful for. Doing this helps set a steady foundation for the day.” On the evening of December 21st, Rose recommended, “Turn off the electric lights and celebrate Winter Solstice by enjoying your dinner by candlelight.” Another way to honor Life this time of year, Rose suggested, is to give back to Nature. “Plant a tree or a shrub, or give someone you love some living greenery.” For those desiring more inspiration information, however, here’s a round-up of ROSEARK jewels to brighten the season, and uplift your gift-giving.

Queen Vee’s founder and designer Veronica Boertée,” Rose detailed, “understands how and why people wear jewelry for highly personal reasons. I think Queen Vee jewels, like her Virgin Mary pendants and rings, appeal to so many of all ages and genders because they make statements as adornments, yet also serve as poetic pieces that make them feel protected.” When asked if she means that some people wear Queen Vee jewels like our ancestors wore amulets and talismans, Rose says, “Absolutely yes, 21st century talismans is what Queen Vee designs and creates— and the Virgin Mary pendant necklaces are even fabricated in Italy, which is a country with a long and rich tradition of wearing coins, religious medals and charms for good luck.” Founded in Beirut, Lebanon in 2010, Queen Vee is now headquartered in Los Angeles. Its jewels are worn by tastemakers and style superstars like Rihanna, Bella Hadid, Jada Pinkett Smith and Kate Bosworth.

As Rose described, “Queen Vee’s signature motif, ‘The Stinger’, is modeled after the Queen Bee insect. As the powerhouse of the hive,” Rose continues, “the Queen is usually the mother of all the bees in its domain. The Stinger makes for a visually striking and timeless motif that suits all genders. People wear it on the red carpet with gowns as well with everyday outfits.” (Emitting a polished, post-punk vibe that’s eternally in style, the Stinger is available in bracelet, necklace and earring designs.) Other standout Queen Vee pieces include Virgin Mary necklaces, made in Italy and gleaming in 18-karat gold and white diamonds, plus Virgin Mary rings, which are 18-karat gold set with black diamonds.

One of the many reasons that jewelry makes such an amazing gift, Rose ventured, “…is because of the beauty and symbolism it can contain. I think that jewelry functions as more than just adornment because jewelry is something that lives on our bodies, and many of us wear our favorite pieces even when we sleep, bathe or swim.” According to Rose, “The fact that we literally live with our jewelry explains why so many of us feel such a strong mind/body/emotional connection to it. Yes jewelry is beautiful and yes it can adorn us,” she continued, “but because jewelry comes to us through people and moments that we treasure, it also contains emotions, personal stories and memories that are forever full of meaning.”

The intrinsic meaning embodied by House of RAVN jewels is especially rich due to the fact that its designer, Angela Kroeger, works with her husband Mike Kroeger, who is a gemologist as well as the bass player for the Canadian rock band Nickelback. (As it happens, Nickelback has sold more than fifty million albums worldwide.)

“Characterized by boldly scaled and gender-fluid designs, intensely vibrant colored gemstones and refreshing visual appeal, House of RAVN is the latest incarnation of Angelea Kroeger’s jewelry making,” Rose recounted. “Angela learned how to be a silver smith from her grandmother when she was a 20-year-old art student in Vancouver. She carved her own waxes, apprenticed with several Vancouver jewelers and created pieces that helped support her husband Mike while he pursued his musical career.” After Nickelback became an international success, Kroeger stepped away from full-time jewelry-making to tour the world with Mike, and raise their children. “Now that Angela lives in Los Angeles, she is returning to jewelry making and still carves her own wax models,” Rose said. “You can see and feel her skilled hand in every House of RAVN piece.”

Light as a feather and bright as the stars in the sky, the Feather Moon pendant collaboration between ROSEARK & One Moon Cashmere is, according to Rose, “An 18-karat gold jewel in which the beauty of the crescent moon unites with, and is amplified by, a golden feather motif.” Created in collaboration with One Moon founder Tara Mercurio, “We both love the way a star-dusting of tiny diamonds adds organic dazzle to this circular ornament of lunar power,” Rose said. Intriguingly, each Feather Moon pendant is bathed in moonlight so that they jewel is infused with lunar energies. Designed and made in California with the lost wax casting method, this design is also available in sterling silver. As Rose relates, “Tara Mercurio and I both adore moon jewelry because in addition to illuminating the night sky, revealing earth’s contours and activating ocean tides, the moon also symbolizes cosmic female energies and intuitive knowledge in many cultural traditions. We also love feather jewels, because feathers help power flight and symbolize the freedom to fly,” she adds.

It’s worth noting here that ROSEARK has long carried various heritage jewelry brands. This winter, Rose noted, “We are presenting richly-hued colored gemstone designs by the New York-based Goshwara, designed by Sweta Jain, who comes from a family of Indian gem purveyors. As children,” Rose recounted, “Sweta and her brother accompanied their father to gemstone mines. They grew up witnessing the journey of gems as they evolved from raw materials into stones that were artfully cut and then incorporated into elegant adornments.” Jain later studied jewelry design at New York’s Fashion Institute of Technology. “Between Sweta’s brilliant design aesthetic, high quality gemstones and her sense of color, Goshwara is a highly distinctive jeweler,” Rose observed.

Other vibrantly colored jewels on offer at ROSEARK include the brightly enameled Hamsa, Heart, Evil Eye and Star necklaces from J By Boghossian. Those seeking more sculpturally avant-garde jewels will be spoiled for choice by the designs of Perez Bitan, Hanut Singh, Yakira Rona, Gintare and Karma El Khalil. Last but not least, hyper-natural designs such as the rose gold and diamond Small Dozen Roses necklace by Rick Rose plus bird and fish-inspired jewels by Manya and Roumen are all highly covetable; instant heirlooms.

According to Rose, “We exist thanks to the dynamic designers who work with us and the loyal clients around the world who support our creative efforts. This allows us to collaborate with jewelers and other designers, like One Moon Cashmere and Kristian Nairn, to create limited edition jewels.” (Nairn and Rose are working on a gold and diamond broom necklace that will be available in early 2022.) What’s more, she added, “As some of our designers have been with us for over a decade, we continue to evolve in tandem. I’m taking the occasion of the Winter Solstice to wish our designers, customers and all jewelry lovers radiant light, radiant health and peace in the coming year.”