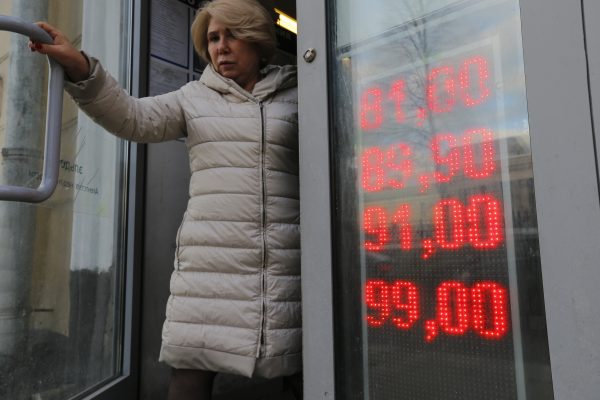 The harsh sanctions imposed on Russia and the resulting crash of the ruble have the Kremlin scrambling to keep the country’s economy running. For Vladimir Putin, that means finding workarounds to the Western economic blockade even as his forces continue to invade Ukraine.

Former Treasury Department officials and sanctions experts expect Russia to try to mitigate the impact of the financial penalties by relying on energy sales and leaning on the country’s reserves in gold and Chinese currency. Putin also is expected to move funds through smaller banks and accounts of elite families not covered by the sanctions, deal in cryptocurrency and rely on Russia’s relationship with China.

The U.S. and EU have levied sanctions on Russia’s biggest banks and its elite, frozen the assets of the country’s Central Bank located outside the country, and excluded its financial institutions from the SWIFT bank messaging system — but have largely allowed its oil and natural gas to continue to flow freely to the rest of the world.

While Russia is likely to turn closer to China to make up for lost supplies of goods and services it normally would get from the West, Smith said, “they’re also betting that their enormous energy supplies will continue to be in demand, particularly during this cold winter. There’s significantly more profit to be made from their energy if they can get it to market.”

Last month, Russia and China signed a 30-year deal that will allow Russia to supply gas to China, though the pipes to carry that gas won’t be completed for at least three years. In addition, China announced last week that it would allow imports of wheat from all parts of Russia for the first time.

However, Smith said the Chinese and others “will be driving incredibly hard bargains” now that Russia has fewer willing buyers, and China will want to avoid being subject to secondary sanctions or sanctions violations enforcement.

On Monday, the U.S. further tightened its sanctions to immobilize any assets of the Russian Central Bank in the United States or held by Americans. The Biden administration estimated the move could impact hundreds of billions of dollars of Russian funding.

The latest measures did include a carve-out that authorizes energy-related transactions with the bank. The penalties also do not impact Russia’s gold stockpile, which Putin has been accumulating for several years.

Tyler Kustra, an assistant professor of politics at the University of Nottingham who has studied economic sanctions, said Moscow had already been adopting a “Fortress Russia economy” — producing many goods domestically even if it was easier to import them — to shield the economy from sanctions.

Much of Russia’s food is produced locally, but some of it doesn’t match similar foreign-made items while others can’t be substituted, he said.

An increased reliance on cryptocurrency will be an inevitable avenue for Russia to try to prop up its financial transactions, said David Szakonyi, a political science professor at George Washington University, “but it’s unlikely it’ll serve as a substitute for corporate transactions over time.”

While about 80 percent of Russia’s financial transactions in the past have been done with the dollar, federal law enforcement and Treasury officials are stepping up efforts to “aggressively combat” the misuse of cryptocurrency to evade sanctions, according to a White House official who was not authorized to comment publicly and spoke on the condition of anonymity.

The official would not comment on whether the Biden administration is weighing targeting Russia-based crypto exchanges for sanctions.

The administration has experience regulating Russian crypto business. Earlier this year, Treasury sanctioned Russia-based SUEX and 25 affiliated cryptocurrency businesses, blacklisting the exchange from the dollar financial system, for allegedly helping criminal hackers clean and cash out their loot. It was the first crypto business to receive that designation.

Ari Redbord, a former Treasury senior adviser who heads government affairs at TRM, which among other things develops analytics on financial crimes, said his organization has identified at least 340  businesses in Russia that could be potentially used as “on and off ramps” for crypto currency.

Redbord said that because of the breadth of the sanctions, the amount of crypto that Russia would need to replace the billions of sanctions “would be very difficult to off-ramp into traditional currency.”

Ori Lev, who served as a head of enforcement at Treasury’s Office of Foreign Assets Control during the Obama administration, said that overall, “whether it’s using cryptocurrency or relying on China, there are mitigating actions they can take but they can’t recreate the financial system.”

The Biden administration has argued that China won’t be able to make up for the loss of U.S. and European business and that sanctions cutting Russia off from Western sovereign debt markets will be crippling. At the same time, the White House has sought to publicly make the case that Beijing coming to the rescue of Moscow could be detrimental in the long term for China’s reputation in Europe and around the globe.

By Monday afternoon, the ruble had cratered and Russians stood in ATM lines for hours as inflation fears exploded.

“I don’t know what precise steps they’re going to take to mitigate the bite of the sanctions, but it’s not going to undo them,” Lev said.