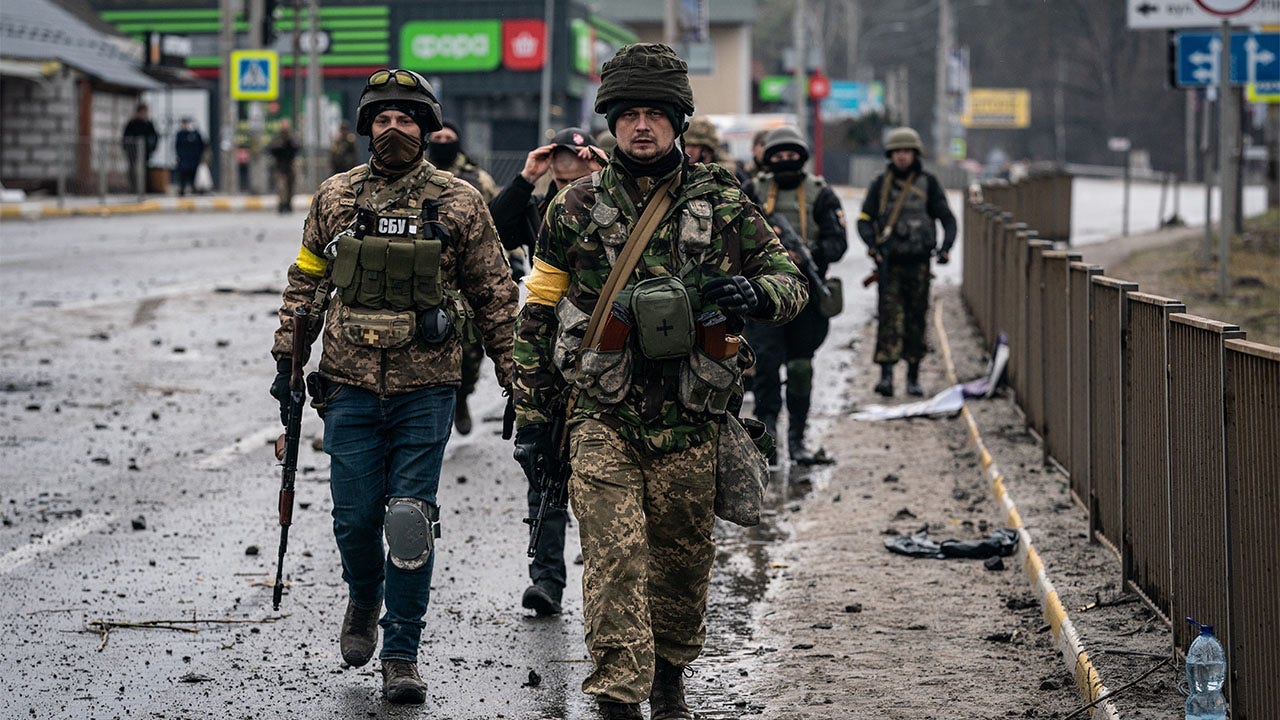 Russian troops have launched more than 1,080 missiles at Ukrainian targets since the start of the invasion.

Ukrainian soldiers near a recently collapsed bridge that was the target of a Russian missile near the town of Irpin, Ukraine, March 3, 2022.
(Wolfgang Schwan/Anadolu Agency via Getty Images)

Despite weeks of continued attempts to encircle the capital city of Kyiv from three different directions, Russian troops still have “not made significant advances” from the north or northwest, the official said.

“And to the east of Kyiv, we have observed no movement of Russian forces. They remain approximately 30 kilometers to the east,” the official told Fox News, noting that Ukrainians continue to put up a passionate resistance.

Cities that border Belarus and Russia, like Chernihiv and Kharkiv, have continued to fend off Russian forces on the ground from overtaking them.

Mariupol, located in the south of the country in the Donetsk region, has been hit hard by Russian shelling, but Ukrainians are continuing to defend the city.

Reports of missile strikes near the Lviv International Airport also appear to be accurate, the official said, though the type of ammunition used and the extent of the destruction remains unclear.

“We assess the airspace over Ukraine remains contested. The Ukrainian Air Force is continuing to fly aircraft and employ air and missile defense,” the senior dense official said.

Ukranian servicemen seen through a building window as they carry the remains of a missile after shelling in a residential area in Kyiv March 18, 2022.
(Aris Messinis/AFP via Getty Images)

It is estimated that Russia maintains 90% of its available combat power, and Ukrainian President Volodymyr Zelenskyy continues to press the U.S. and NATO to install a no-fly zone or send in additional air support.

The 30-member alliance again refused to enact a no-fly zone this week, citing concerns it could escalate the war beyond Ukraine’s borders

U.S. Secretary of Defense Lloyd Austin said this policy is necessary because enforcing a no-fly zone would require “combat with Russia.”

DOD SAYS RUSSIA LAUNCHING AERIAL CRUISE MISSILES FROM ITS BORDERS: ‘NO-FLY ZONE WOULD NOT HAVE PREVENTED THAT’

“POTUS was clear we would not have U.S. forces fighting in Ukraine,” Autin told reporters Thursday.

The U.S. pledged to provide another $1 billion in defensive aid this week and said it was working with Ukraine to address its aerial defenses.

Officials have said the vast amount of Russian missile fire has come from ground-based systems that would make enforcing a no-fly zone ineffective.

Instead, Austin said the use of drones has proven “very effective,” and Ukraine’s use of surface-to-air missiles has helped Ukrainian troops exchange fire with Russian forces.

A load of 100 grenade launchers, 500 rifles, 1,000 pistols, 400 machine guns, 400 shotguns and 200 million rounds of ammunition will be included to help fight the ongoing ground war in Ukraine.