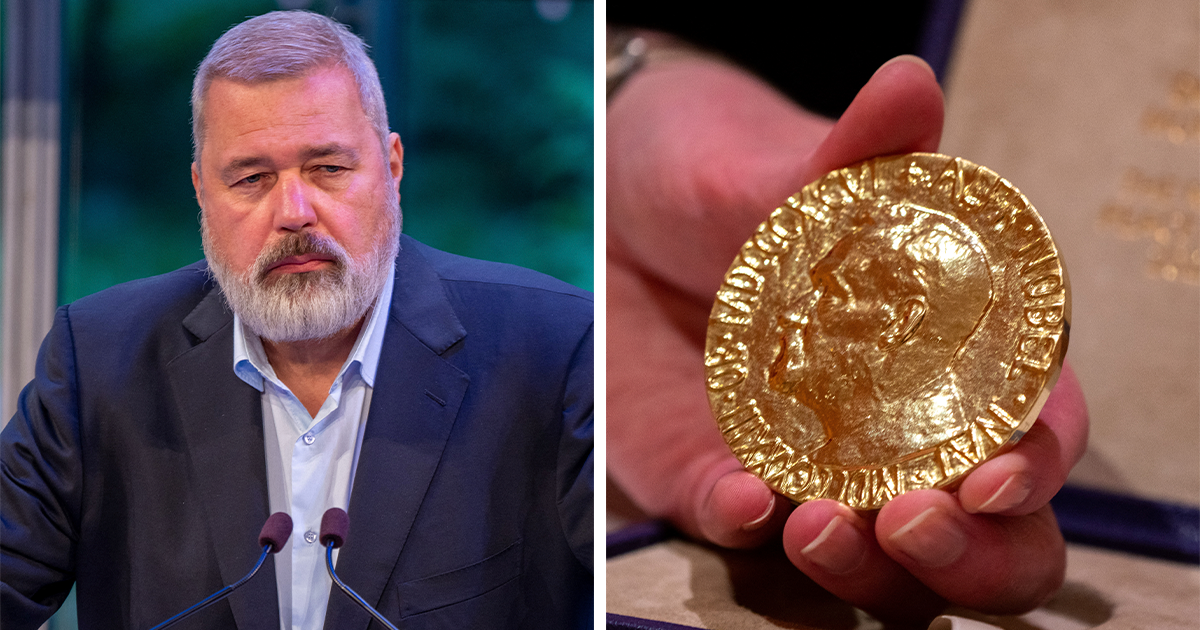 As war continues in Ukraine, millions are left wondering – when will the bloodshed end? When will the uncertainty end? When will fear cease its grip? For now, it’s anyone’s guess, but one thing is certain: the solidarity shown to the people of Ukraine, regardless of how big or small, stands as a reminder of humanity and empathy.

One such act has happened recently, with a Russian journalist auctioning off his Nobel Peace Prize for a record-breaking sum of $103.5 million, which will be donated to help Ukrainian children affected by the war. Let’s dive into the details.

Russian journalist Dmitry Muratov auctioned off his Nobel Peace Prize for a record-breaking $103.5 million to help Ukrainian children affected by the war

Russian journalist Dmitry Muratov auctioned off his Nobel Peace Prize for a record-breaking $103.5 million to help UNICEF’s efforts in aiding Ukrainian children affected by the war. The winner of the auction is currently anonymous.

The 60-year-old editor-in-chief for Novaya Gazeta newspaper was co-awarded the prize in 2021, alongside Filipino journalist Maria Ressa “for their efforts to safeguard freedom of expression, which is a precondition for democracy and lasting peace.”

According to Nobel’s will, the Peace Prize is awarded to the persons who in the preceding year “shall have done the most or the best work for fraternity between nations, for the abolition or reduction of standing armies and for the holding and promotion of peace congresses.”

It is considered to be one of the most prestigious awards in the world, and now the prize itself is aiding efforts for peace.

He was co-awarded the prize in 2021, alongside Filipino journalist Maria Ressa “for their efforts to safeguard freedom of expression”

The independent newspaper Novaya Gazeta was very critical of President Vladimir Putin and his government; thus, after the war started on February 24, the newspaper was forced to suspend its operations in March, after warnings from the Kremlin, due to their coverage of the invasion.

Russia’s mainstream media and state-controlled organizations must follow the language used by the Kremlin to describe the invasion of Ukraine, which Moscow calls a “special operation” to ensure Russian security. Kyiv and its Western allies say it is an unprovoked war of aggression.

He announced that he would be donating the $500,000 cash award he received from his Nobel peace prize to charity. He dedicated the prize to the six Novaya Gazeta journalists who have been murdered since 2000, one of whom was journalist Anna Politkovskaya, a critic of Russia’s war in Chechnya, who was killed in 2006.

In April, Dmitry was attacked with red oil paint and acetone for his criticism of the President while on a train heading to Samara. His newspaper’s staff have endured assassinations and threats since the paper’s founding in 1993, but this is the first time it has suspended publication.

Dmitry was inspired by the Danish physicist Niels Bohr, who sold his medal to help civilian relief in Finland following the Soviet invasion in 1939

Dmitry decided to auction off the peace prize because, as stated in an interview with The New York Times, he was inspired by the Danish physicist Niels Bohr, who sold his medal to help civilian relief in Finland following the Soviet invasion in 1939.

On Monday, June 20, the auction took place. Organized by Heritage Auctions, the date coincided with World Refugee Day. The bidding for the award began on June 1, online and by telephone. Originally, the highest bid stood at $550,000, after which, bids increased.

“This award is unlike any other auction offering to present,” Heritage Auctions said in a statement before the sale. “Mr. Muratov, with the full support of his staff at Novaya Gazeta, is allowing us to auction his medal not as a collectible but as an event that he hopes will positively impact the lives of millions of Ukrainian refugees.”

The sale broke the record for any Nobel medal that has been auctioned off, with the previous highest deal set at $4.76 million in 2014 by James Watson

“I don’t think the object mattered,” Joshua Benesh, the chief strategy officer for Heritage Auctions, said of the 23-karat gold Nobel medal up for auction. “I think the object is a metaphor, it’s a symbol for something. It’s the opportunity to stand up and say, ‘This is a cause that has meaning and it’s a problem that a donation can begin to fix.’”

Following the sale, Dmitry said it exceeded all of his expectations: “I was hoping that there was going to be an enormous amount of solidarity. But I was not expecting this to be such a huge amount.” The sale broke the record for any Nobel medal that has been auctioned off, with the previous highest deal set at $4.76 million in 2014, when James Watson auctioned his 1962 award for co-discovering the double helix structure of DNA.

“I can’t believe it, I’m awestruck,” Mr. Benesh said after the auction. “We knew that there was a tremendous groundswell of interest in the last couple of days by people who were moved by Dimitry’s story, by Dimitry’s act of generosity, that the global audience was listening tonight,” he added.

“The most important message today is for people to understand that there is a war going on and we need to help people who are suffering the most,” Dmitry said

“The most important message today is for people to understand that there is a war going on and we need to help people who are suffering the most,” Dmitry said. He hopes that the bid on his Nobel Prize will encourage others to donate. “It has to become the beginning of a flash mob or as an example to follow, so people auction their valuable possessions to help Ukrainian refugees.”

For all those interested in supporting Ukraine, here is a list of resources. We hope the money will help improve the lives of those that need it most. Words are powerful and so are actions. The war must not be forgotten, especially now when our efforts matter the most.

People believe this exemplifies the purpose of the Nobel Peace Prize in its entirety. Leave your thoughts in the comments below!

Oh, and perhaps nominate Dmitry for another one!