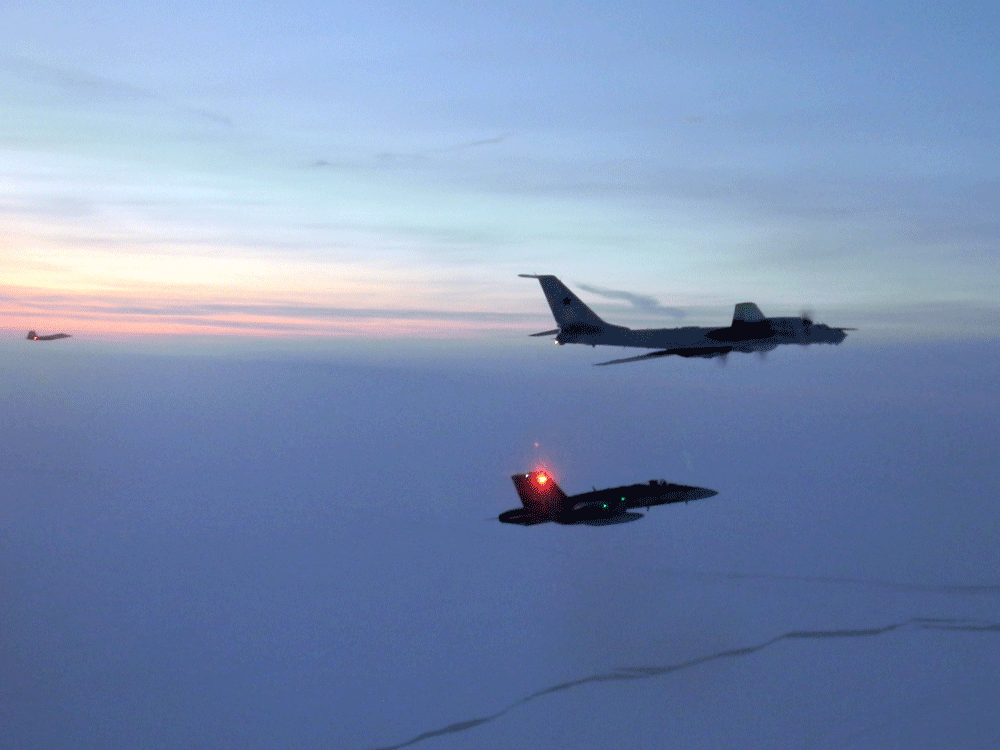 “There’s no doubt the global security environment has changed… There is no question that our foreign policy, and certainly our defence policy has to adapt,” Anand told an Ottawa defence conference on March 11.

“The work is happening now to ensure that we are prepared for any eventuality, including in terms of protecting our Arctic sovereignty.”

What’s the concern with the Arctic?

Even before Russia invaded Ukraine in February, the Canadian government was flagging Russia’s activities in the region. Briefing materials prepared for Mélanie Joly when she became foreign affairs minister said that Canada views the Arctic as “emerging as an area of geostrategic importance and competition.”

Russia, China and the United States are “developing capabilities to better operate and project their presence.” Russia is reinvesting its military capabilities and presence in the region, while China has declared itself a “near Arctic” state that has strategic interests in the area, according to the document.

What are Russia and China up to?

The briefing binder said China has also been expanding its “investments and engagement in the polar regions including seeking to influence Canadian Arctic communities.”

Adam Lajeunesse, the Irving Shipbuilding chair in Canadian arctic marine security at St. Francis Xavier University, said there’s no evidence of China looking to influence Northern communities in Canada. But of course, the government could know something that’s not public knowledge. And such behaviour is “absolutely China’s modus operandi,” Lajeunesse said. “If we look at the way China has tried to influence different Arctic countries … it often bypasses the central government to try and win friends and influence in communities themselves.”

That said, China has never deployed a warship to the Arctic circle, and is unlikely to do so in the near future, Lajeunesse said. “So the Chinese are not a military threat in the Arctic, certainly not yet. The Russians absolutely are,” he said.

The Arctic isn’t a monolith, though

It’s important to draw a distinction between the Canadian and European Arctic, Lajeunesse said, explaining Russia’s “ability to project power into the Canadian Arctic has not materially increased in the last decade.”

Russia has “considerable” militarization in the Arctic, but it “can’t even reach Canada. It’s not a threat to Canada,” he said. Indeed, Joly’s briefing binder pegs the threat of conflict in the area as low.

But the European Arctic, Lajeunesse said, “is very much in danger of Russian aggression, because they share a border with Russia, and they are very much in a range of all of the weapons.”

The Canadian Arctic is “not something the Russians are going to attack or fight over, but it is an avenue through which” Russian submarines or Russian cruise missiles might travel, he said.

What’s the danger to Canada?

Robert Huebert, associate professor of political science at the University of Calgary, thinks there’s a bigger threat of conflict in the Arctic than some of his colleagues do. Arguing that we’re farther away from Russia than other northern countries “totally misses the point.”

“We are in an alliance, and if fighting in the North occurs within the context of say, Norway, Denmark or any of our other northern allies … we are then, of course, obligated to go to their defence,” he said. “One can assume that the Russians will anticipate that, and we can assume that they will look for a weak link.”

That doesn’t necessarily mean we need a base or troops in the North. “That’s not what the threat is. The threat is an aerospace, maritime threat,” he said.

Which is where Norad comes in?

Exactly. The North American Aerospace Defense Command is a joint military command with the U.S. that provides airspace surveillance.  It was first created during the Cold War to protect against a Soviet attack.

Joly’s briefing binder noted that increased “defence spending on Norad modernization has been an important bilateral discussion point with the Biden Administration and would also be relevant for discussions of burden sharing in the NATO context.”

The problem is that Norad uses equipment that dates from the Cold War. “The technology of the north warning system was last modernized in 1985,” Huebert pointed out. “Would you want to be using a computer that was built in 1985, that your life depended on, literally?”

James Fergusson, deputy director for the Centre for Defence and Security Studies at the University of Manitoba, said it was a system designed for the threats of the day — long range bomber threats from the Soviet Union. “The radars cannot deal with the new generation of threats we deal with, that is, longer and longer range cruise missiles,” he said.

What (and how much) will it take to modernize Norad?

While estimates of around $11 billion have been floated, we don’t really know what the final price tag will be, said Fergusson. Part of the reason is that the system will use new and advanced technologies, some of which are still being developed.

“You don’t know what you’re pricing… we don’t know what Norad modernization is going to look like,” Lajeunesse said. The next generation of Norad will likely include the maritime element, for what’s called “all domain awareness.”

“It’s not just about Russian bombers, as it was in the ’50s. Now we’re talking about submarines and civilian ships, illegal fishing fleets,” he said. “It is very important to have this understanding of what’s happening in our own domain.”

Huebert pointed out that “we have no underwater meaningful surveillance capability, even though we know that the Russians have been developing all sorts of new capabilities in that regard” for the past decade and a half.

What kind of money could be in the budget then?

Anand told the CBC that she is preparing “aggressive options” for increasing defence spending, some of which would see Canada exceed NATO’s recommended two per of GDP target. Canada currently spends 1.39 per cent of GDP.

Fergusson said the Liberal government first identified the need to modernize Norad as a priority in 2017, but hasn’t set aside any money since. He predicted defence spending will likely increase, but not to the two per cent target.

Huebert was more pessimistic about the government coming through with the money to beef up Canada’s Arctic defences.

“I hate to say it, but I think the only scenario is if this current crisis escalates to a level in which NATO forces are in fact engaging Russia,” he said.