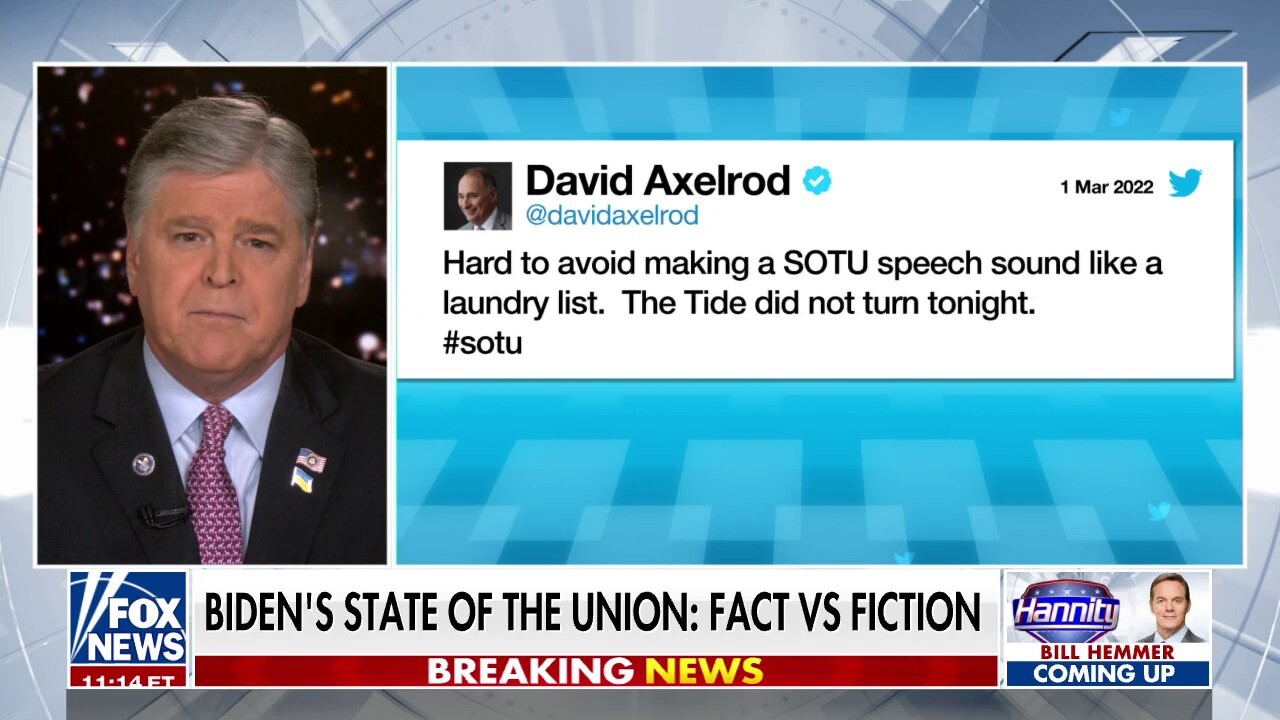 “Biden’s first official State of the Union is now in the books, and as expected, it was an unmitigated, predictable disaster,” he said. “Platitudes, bumper sticker slogans, you name it. Filled with smoke and mirrors, detached from reality, seemingly written, to be honest, by a kid in kindergarten, maybe first grade if we’re being generous.”

“And to be honest, I would have preferred to watch the president of Ukraine, who is now bravely fighting and leading a war against this Russian invasion. And tonight, if the world was looking for any American leadership, they didn’t get it from Joe Biden. This speech defined America last, not America first.”

TOP FIVE TAKEAWAYS FROM BIDEN’S STATE OF THE UNION ADDRESS

Instead, Biden’s proposed fix for inflation is more spending and lower business costs. Inflation costs the typical United States household $5,000 a year, Hannity reported, in what he called a “tax on the poor and the middle class.”

Gas prices have reportedly almost doubled in the last year as Biden outsources the U.S. energy industry to countries that “have no EPA” and “hate America,” he added.

“Biden’s socialist Green New Deal energy plans, they’re fraudulent at best. Biden is not making America greener or safer,” Hannity said. “Instead, he’s restricting domestic production of oil and gas. That lowers the world’s supply of energy. And as the demand remains constant or increases, that just increases the price.”

The Fox News host noted that the U.S. imports 500,000 barrels of oil daily from Russia despite its ability to produce oil and gas domestically and help Western European and NATO allies.

“But Biden put a new pause on oil and gas leases on America the same day that Russia invaded Ukraine.”

Hannity also reacted to the president’s “complete 180” on calls to defund the police.

“Why didn’t you say that when it would have mattered in the summer of 2020, when dozens of Americans died, thousands of American police were hurt?” he asked. “With bricks, rocks, bottles, Molotov cocktails. Billions of dollars in property damage, arson and looting. A truly amazing election year conversion if ever there was one.”