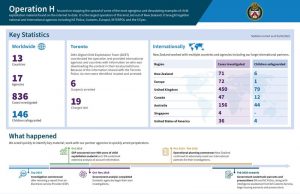 Several people from Toronto have been arrested as part of a large international investigation into online child sexual abuse.

The investigation, dubbed Operation H, began in New Zealand in September 2019 and spanned several countries around the world over a 24-month period.

Digital investigators in New Zeeland shared information with an international team who identified users around the world. The information that was shared with Toronto police led to the identification and arrests of six men who are now facing 18 charges related to the distribution of child sexual abuse material.

“it is these international partnerships that allow us to arrest offenders and most importantly rescue children,” says Toronto Deputy Police Chief Myron Demkiw.

“Because these criminals operate across international borders, so to must the police.”

Another man was arrested in 2020 and was facing charges relating to the investigation but has since died.

There were 47 Canadians arrested across eight provinces and the RCMP say 186 charges have been laid.

Demkiw says the investigation unveiled some of the most horrific images of child abuse that police have ever seen.

“While incomparable to the victims traumatic experiences, the impacts of consuming vast quantities of traumatic digital evidence has been shown to have life-altering impacts,” said Inspector Justin Van Heyden. “Not only on members of law enforcement, but also on legal counsel and the judiciary who must review and assess these cases.”