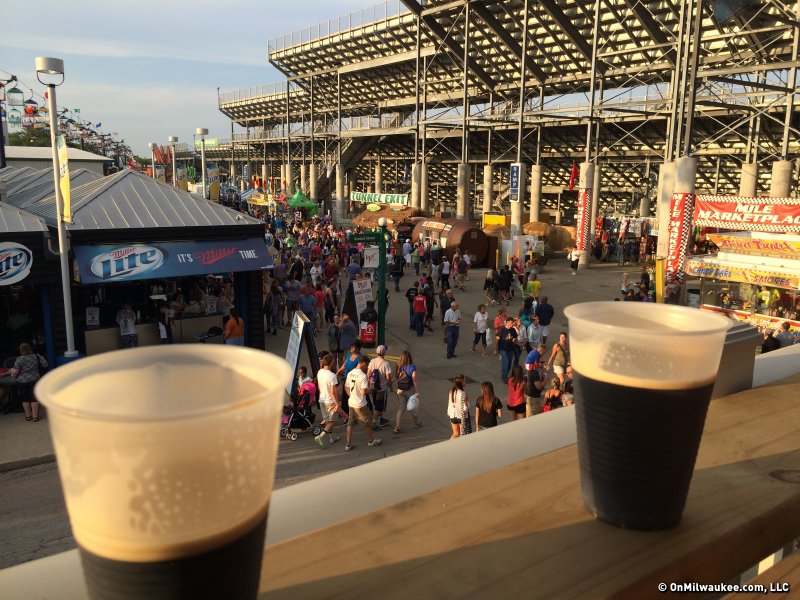 This story originally ran in 2016. We rerun it today in honor of the return of the Wisconsin State Fair, the best place in the world to people watch!

Tonight, I found my new favorite spot at the State Fair – the rooftop patio at Slim McGinn’s East. Both the Guinness and the birds-eye-view people watching are easily accessed.

I sat there for an hour and made notes about the people I noticed walking down State Fair’s Second Street. ‘Twas a beautiful night.

Awkward teenage girl, possibly with her grandma, wears a T-shirt that reads, “I’d rather be sleeping.”

Yellow-haired boy with shorts like the flag of Texas is carried on the shoulders of a man.

Man eating corn-on-the-cob finishes the corn and starts to eat the end of the cob.

Dark-haired woman with round sunglasses eats from a Chinese carry-out container.

Man wearing a shirt that reads “Stallis: We don’t raise the bar, we close it.”

Woman in a Bucky Badger shirt eats an ear of corn, stops to dab butter off her chest with a napkin.

A little girl blows on a plastic trumpet sits on the lap of a woman in a wheelchair pushed by another woman.

Man walks with an aluminum bottle of Miller Lite in his mouth while he zips up his jacket.

Two police on horses, one brown, one browner. Neon anklets reflect in the fading sunlight.

Baby in a stroller, pushed by a woman with a tattoo that looks like a garter around her thigh.

Man wears a Heart concert T-shirt and has a dangly earring in his left ear.

60-something guy in a leather cap with a fake yellow flower adorned to it stops to feed the lady next to him a spoonful of root beer float.

A cream puff worker wears all white, a ball cap and his mask under his chin.