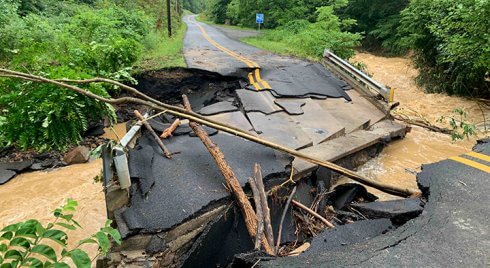 “We had two inches plus in the areas affected. It got into the hollows and just came on. It hit so fast it all became runoff instead of soaking into the ground,” said Bobby Bowman, deputy director of the McDowell County Office of Emergency Services.

I have declared a State of Emergency for McDowell County due to excessive rainfall on Monday, July 12, which caused significant flooding that damaged over 75 homes, approximately a dozen bridges, and numerous roads throughout the county.

The storm Tuesday night into Wednesday morning impacted 50 to 100 homes in the southern end of McDowell County. The impacted areas included Warriormine and Berwind. Bowman estimated about 14 bridges and a slew of roadways were damaged or destroyed.

“Some are completely gone, some are heavily damaged, and some are lightly damaged,” he said.

Governor Jim Justice declared a State of Emergency for McDowell County to accelerate the state’s response to the water damage in the county.

Although a number of people were impacted with property damage, Bowman said nobody is believed to be missing. Virginia officials on Thursday confirmed there are no missing people or deaths in the commonwealth related to the weather event.

“Our thoughts and prayers go out to everybody affected, but our event doesn’t seem to be nearly as big as theirs,” Bowman said.

Joe Pack, the deputy state highway engineer and chief of district operations for the West Virginia Division of Highways, told MetroNews it isn’t clear how long it will take to repair roads impacted by the high water.

“Our immediate concern is, of course, debris removal and providing immediate access to and from homes for emergency services and our citizens,” he explained. “Each site creates its own plan and schedule. Our response is always we’re going to move as fast as possible.”