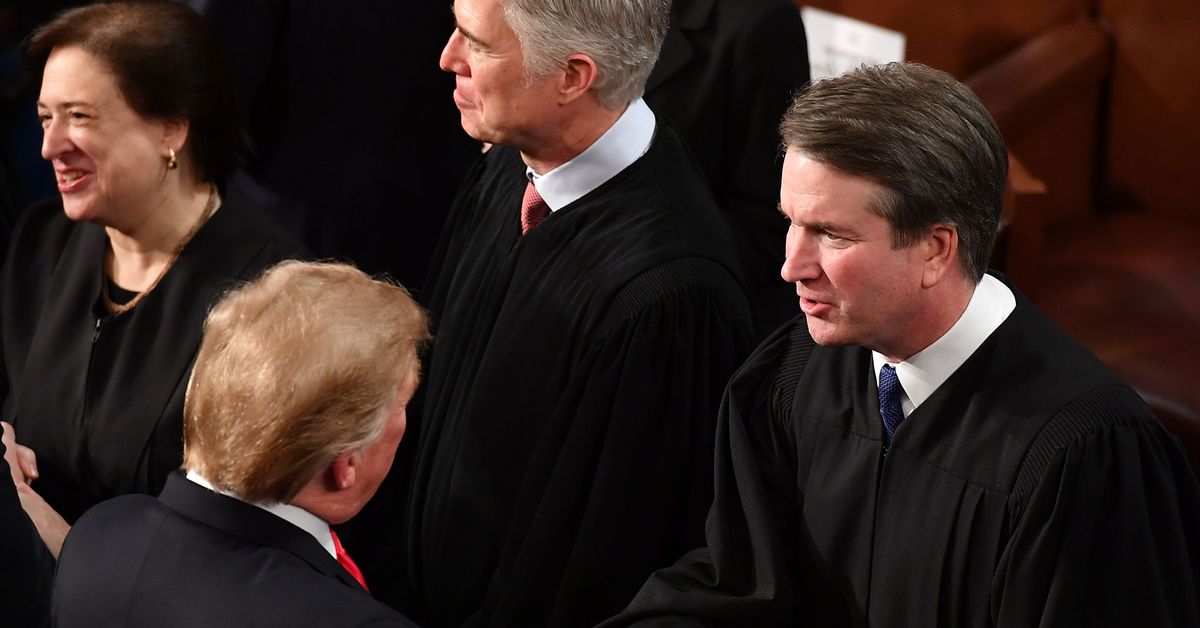 Unless the Supreme Court intervenes on former President Donald Trump’s behalf, a US House committee investigating the January 6 attack on the US Capitol will soon know a lot more about the Trump White House’s involvement in this attack.

Earlier this month, a federal appeals court held that the January 6 committee may obtain records that Trump wants to keep away from this investigation. That leaves the Supreme Court, where a third of the seats are occupied by Trump’s own appointees, as Trump’s last recourse in his bid to keep whatever is in these records secret.

The appeals court panel that rejected Trump’s request to keep the documents secret in Trump v. Thompson was made up entirely of Democratic appointees, so their opinion offers no real insight into how a Supreme Court dominated by conservative Republican appointees will approach this case. Although the Thompson opinion accurately describes the current state of federal law governing congressional investigations, the Supreme Court may very well change that law to accommodate Trump — after all, it already did so once when Trump was president.

But there is one very important distinction between Thompson and Trump v. Mazars (2020), the Trump-era Supreme Court decision that effectively allowed Trump to keep his financial records secret from Congress until after the 2020 election. Trump was president when Mazars rewrote much of the law governing congressional investigations, at least when those investigations target a sitting president. Now, Trump is merely a private citizen.

Thompson, in other words, will reveal whether the Supreme Court is willing to create another carve-out to Congress’s investigatory powers — this time to benefit a Republican political leader who holds no public office.

Thompson specifically concerns hundreds of pages of records from the Trump White House, which the January 6 committee seeks as part of its investigation and that are currently held in a federal archive. Trump claims that these records should not be disclosed to the committee, and his most salient argument is that they are protected by executive privilege.

The Supreme Court did hold in Nixon v. Administrator of General Services (GSA) (1977) that this privilege, which protects the secrecy of certain internal White House deliberations, “survives the individual President’s tenure.” But a former president’s power to keep such deliberations secret is much weaker than the power of a sitting president to do the same, and it is especially weak when the current president believes that a former administration’s documents should not remain secret.

As the Court held in the GSA case, the fact that neither President Gerald Ford nor President Jimmy Carter supported former President Richard Nixon’s claim that certain documents should remain confidential “detracts from the weight” of Nixon’s claim.

In Thompson, President Joe Biden determined that the documents at issue in that case should not remain secret because they “shed light on events within the White House on and about January 6 and bear on the Select Committee’s need to understand the facts underlying the most serious attack on the operations of the Federal Government since the Civil War.”

It’s now up to the justices to decide if those documents should nonetheless remain hidden.

What the law currently says about congressional investigations

According to the appeals court that upheld the January 6 committee’s request, the committee seeks documents and other Trump White House communications “generated within the White House on January 6, 2021, that relate to . . . the violence at the Capitol” and the pro-Trump rallies that took place earlier in the day. It also seeks “calendars and schedules documenting meetings or events attended by President Trump, White House visitor records, and call logs and telephone records from January 6,” and a range of other documents concerning Capitol security, the transfer of power from Trump to Biden, and Trump’s efforts to contest the 2020 election.

Trump raises several arguments attacking these requests, two of which can be disposed of in a few sentences.

The former president’s lawyers claim, for example, that the courts should apply a special rule announced in Mazars, which governs congressional investigations into a sitting president. But Mazars is quite clear that this rule applies only to the nation’s current president because “the President is the only person who alone composes a branch of government.” The key words here are “only person” and “alone.” Only one person at a time is entitled to the special solicitude the courts sometimes apply to a sitting president. And right now that person is Joe Biden, not Donald Trump.

Similarly, Trump claims that the contested records are beyond Congress’s power to conduct investigations. But this argument borders on frivolous. The Supreme Court has long held that Congress may investigate any subject matter “on which legislation could be had.” And the January 6 investigation could inform all sorts of potential legislation, including laws governing the certification of a presidential election, laws governing police resources at the Capitol, and laws shaping the government’s response to domestic terrorism.

That leaves Trump’s claim that the documents are protected by executive privilege. As the Court explained in United States v. Nixon (1974), such a privilege exists to ensure that presidents receive candid advice from staffers who may be more circumspect if they fear that their communications will become public. “Those who expect public dissemination of their remarks,” the 1974 Nixon case explained, “may well temper candor with a concern for appearances and for their own interests to the detriment of the decisionmaking process.”

For this reason, GSA’s holding that executive privilege does not evaporate completely when a president leaves office makes sense. A presidential adviser might be reluctant to offer unpopular advice in 2020 if they fear that this advice could become widely known in 2021.

Still, as mentioned above, executive privilege is weaker for a former president. And it is especially weak when the sitting president disagrees with their predecessor’s decision to assert executive privilege. “It must be presumed that the incumbent President is vitally concerned with and in the best position to assess the present and future needs of the Executive Branch,” the Court explained in GSA, including the executive branch’s need to keep the advice offered by past presidential advisers secret.

So how strong is Trump’s executive privilege claim?

Even if Trump were still the incumbent president, the House committee seeks to investigate a matter of transcendent importance — a mob that breached the Capitol and that sought to undermine the duly elected government of the United States of America. So it’s unlikely that, at least under current law, Trump could keep the documents the January 6 committee seeks secret even if he were still in office.

In Nixon, the Court ordered then-sitting President Richard Nixon to turn over tape recordings that incriminated him and led to his resignation from office. As the Court explained, executive privilege is neither “absolute” nor “unqualified.” Thus, “absent a claim of need to protect military, diplomatic, or sensitive national security secrets,” the justice system’s need to conduct a full investigation into the Watergate scandal that eventually brought down Nixon, and to prosecute anyone who committed a crime, overcame the White House’s interest in keeping Nixon’s communications secret.

That said, there is one important distinction between the Nixon case and the January 6 investigation at issue in Thompson. While Nixon involved a special prosecutor’s investigation — and the Nixon opinion speaks of the need to preserve “the primary constitutional duty of the Judicial Branch to do justice in criminal prosecutions” — Thompson involves a congressional investigation. So Trump could argue that Congress’s investigatory power is less expansive than the authority of a federal prosecutor and the courts that enforce that prosecutor’s subpoenas.

But this argument is undercut by GSA, which upheld a federal statute that required the federal government to take custody of Nixon’s presidential records after Nixon left office. Nixon held that a “generalized assertion of privilege must yield to the demonstrated, specified need for evidence in a pending criminal trial.” GSA held that an assertion of privilege similarly must yield to “substantial public interests”, such as “Congress’ need to understand” how the executive branch behaved during Watergate.

Read together, in other words, Nixon and GSA stand for several important propositions. One is that executive privilege is not absolute. A second is that it must yield to an investigation into matters that potentially endanger the country itself. A third is that a former president’s power to assert the privilege is much weaker than an incumbent’s. A fourth is that this power is especially weak when the incumbent president believes that the privilege should not be asserted in a particular case.

In light of these four propositions, Trump’s claim that the documents sought by the January 6 committee should be shielded by executive privilege is exceedingly weak — at least if the Supreme Court decides not to change the law.

Read outside its political context, the Court’s mid-2020 decision in Mazars could be read as a defeat for Trump. Although the Court announced a new rule that governs investigations into a sitting president, it did not immediately shut down the House investigation into Trump’s financial records. In theory, Mazars still permitted the House to seek those records in subsequent litigation.

But the practical impact of Mazars was that it allowed Trump to keep his records secret until after the 2020 election. That was an enormous victory for Trump.

A similar dynamic could play out in the Thompson case. Although the appeals court ruled against Trump in Thompson, it blocked its own order until December 23 to give Trump enough time to seek review of this case in the Supreme Court. In the overwhelmingly likely event that Trump’s lawyers do seek Supreme Court review, the appeals court order will not take effect until after the justices decide whether to act on the case.

If the Court agrees to hear the case, Trump’s records will almost certainly remain secret while the case is pending before the justices — and, depending on when the justices schedule the oral argument in Thompson and when they hand down their decision, the Court could potentially delay its own ruling until after a newly elected Congress takes office in January 2023.

In part because of gerrymandering and in part because the party that controls the White House tends to lose seats in midterm elections, Republicans are favored to regain control of Congress in the next election. If they do, they can shut down the January 6 committee and quash any of its ongoing efforts to obtain Trump’s documents.

The Supreme Court, in other words, doesn’t even need to overrule any existing precedents in order to carry Trump’s water in the Thompson case. All it has to do is run out the clock.