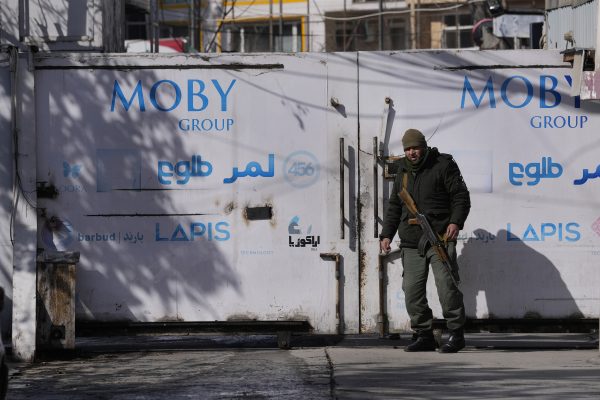 The country’s new rulers apparently didn’t like a story the broadcaster aired on their decision to ban foreign drama series from local television, said Khpalwak Sapai, head of TOLONews, who was among the three arrested.

Sapai, and Nafay Khaleeq, the station’s legal adviser, were released within hours, but the station presenter, Bahram Aman was still in custody Friday, Sapai told The Associated Press.

The intelligence officials from the Taliban’s General Directorate of Intelligence (GDI) came shortly after 8 p.m. Thursday to arrest the three. Sapai said the station was still seeking the release of Aman.

Moby Group, the media company that owns TOLO TV, said the detentions were “for publishing Tolo news about banning of the foreign drama series,” a decision made by the Taliban’s Ministry for the Propagation of Virtue and Prevention of Vice.

The Afghan-owned media company has interests in South and Central Asia as well as the Middle East and Africa.

The arrests were met with international outcry, including broader demands from the U.N. and the Committee to Protect Journalists (CPJ) for the country’s rulers to stop harassing local journalists and stifling free expression through threats, arrests and intimidation.

“The Taliban must immediately release journalist Bahram Aman, a news presenter at independent broadcaster TOLOnews, and stop detaining and intimidating members of the Afghanistan press corps,” a statement from the U.S.-based CPJ said.

The United Nations Assistance Mission in Afghanistan (UNAMA) urged the same. “UNAMA expresses its deep concern about the detentions of journalists and the ever increasing restrictions being placed on media in Afghanistan,” it said on Twitter. “Time for the Taliban to stop gagging & banning. Time for a constructive dialogue with the Afghan media community.”

Neither the Taliban’s information and culture ministry nor its intelligence agency responded to requests from the AP for comment.

Since sweeping back to power last August, the Taliban have sent erratic signals about what the media landscape will look like under their rule, with international journalists sometimes welcomed and Afghan media often attacked.

The ranks of journalists in Afghanistan thinned dramatically during the chaotic days of the U.S. withdrawal last August when tens of thousands of Afghans fled or were evacuated by foreign governments and organizations. Many who stayed, and even those who have not had run-ins with the new Taliban rulers, say they are afraid of what tomorrow might bring.

The majority of TOLONews reporters and producers are women because Sapai, who was briefly detained, said he made a special effort to recruit and train Afghan women journalists.

In December, Reporters Without Borders and the Afghan Independent Journalist Association found that 231 out of 543 media outlets had closed, while more than 6,400 journalists lost their jobs after the Taliban takeover. The outlets closed for lack of funds or because journalists had left the country, according to the report.