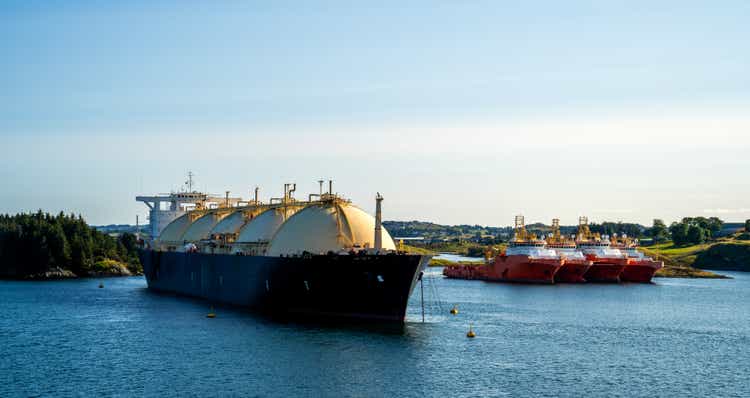 Things are not going particularly well for energy company Tellurian (NYSE:TELL). After news broke that a critical financing round for the company was shut down by management because of what management referred to as ‘uncertainty’ in the junk bond market, the company was left with a lack of capital needed to fund its $12.8 billion Driftwood LNG project. It would be one thing if this were one of multiple projects the company had in the works or if it was already well-established in the space. But this was the big gamble of the enterprise and, without it, the company is losing a significant amount of cash each year. While management is trying to work ways around this problem, there is no guarantee that there will be a favorable outcome for shareholders. In most cases, I would argue that this could be grounds for an eventual bankruptcy. Having said that, the company does have some other assets that might make an investment at current prices worthwhile. But because there does exist a lot of uncertainty regarding these and management’s path forward, I do think a more appropriate rating for the company is a ‘hold’, to reflect a more neutral stance on the enterprise until the dust settles.

What went wrong with Tellurian

For a couple of years now, the management team at Tellurian has been focused on building one of the largest LNG export terminals in the world, with the end goal being a facility with annual capacity of up to 27.6 million tons per annum. This project is slated to cost the company $12.8 billion to build for the first two plants of the five, with said project capable of 11 million tons of capacity per year. This breakdown includes $8.5 billion for the actual LNG terminal, $1.5 billion in miscellaneous operational costs, roughly $900 million for pipeline development, and financing, interest, and other costs totaling $1.9 billion.

The end result, management said, would be a facility that helps meet growing demand for LNG that is certain to outpace the growth in supply. In fact, from 2021 through 2030, the company has forecasted that total demand growth will be around 198 million tons per annum, with supply growth totaling just 115 million tons. Of course, this number is not entirely reliable. Some of the demand growth, totaling around 66 million tons per annum, is estimated to be the incremental LNG requirement from Europe should it eventually wean itself off of supply from Russia entirely. At the end of the day, we live in a global economy and it’s not unthinkable that Russia could sell product, given enough time, to other countries that don’t mind looking the other way when it comes to the war in Ukraine.

In the event that the Driftwood LNG project ends up being successful, management forecasts that annual operating cash flow from Phase 1, which focuses on the first two plants, will be around $4 billion annually. This assumes $85 per barrel for Brent crude and $14 JKM on a Btu equivalency basis. Using the cash flow from Phase 1, management hopes to build out three additional plans that will help get annual operating cash flow up to $11 billion. Needless to say, such a significant amount of cash flow would propel Tellurian into the stratosphere from a share price perspective.

Given these projections, it may seem odd then what happened next. In March of this year, the company officially began the construction of Driftwood LNG, despite only having 30% of the detailed engineering work completed. Though this may seem odd, it’s not uncommon for large, multi-year projects to defray costs by only having the necessary work done at any given time. In June of this year, the company announced definitive agreements covering $500 million of senior secured convertible notes. The overall terms of these notes were promising. They bore an annual interest rate of 6% and would expire on May 1st of 2025. They would also be convertible into shares of Tellurian at a conversion price of $5.724 per share. Given the rising interest rates that we have seen and where shares were priced at that moment, I would have argued then that the financing in question was appropriate.

After this, the situation started to change some. In August, the company completed the acquisition of some natural gas assets in the Haynesville Shale in exchange for what ultimately ended up being $125.5 million, plus $7.5 million in contingent consideration should certain events transpire. I would get back to this particular transaction momentarily, but what’s important to note is that this entire scenario is more or less unrelated to the larger Driftwood LNG project and seems like a distraction at a time when all extra financing should be dedicated to the monumental export terminal. But then again, this is not the first time that the company has made a peculiar move. In December of last year, for instance, management donated $25 million of the company’s money to the National Forest Foundation for Nationwide Reforestation. This is a great maneuver very well-established company that is positioned nicely for the future. It is not a wise move for an enterprise that has massive checks to write and little to no funding to back them.

When the train really went off the rails was later in the month of August when the company announced another move. This was a high-yield bond sale looking for $1 billion in capital. Initially, the goal was to pay out an annual interest rate of 11.25%. That’s an incredibly high interest rate for debt that ultimately was senior-secured debt. To make matters worse, the company also pledged to attach warrants to these notes, entitling owners to buy 75 shares of common stock in the company for each $1,000 in principal debt that they owned. Based on the $1 billion in financing the company wanted to raise, this would ultimately dilute investors in the company by 11.7% and at a price that would represent only a 20% premium over the 30-day volume weighted average price of the firm’s stock at the time the deal closed.

Normally, investors should have been all over this kind of deal. If anything, it seemed to be far too generous on Tellurian’s part. This is especially true when you consider that all of the capacity for the Phase 1 of Driftwood LNG was already committed to prior to the terminal ever breaking ground. And assuming that investors accepted the projections that management laid out, the end result for all parties involved should have been fantastic. Unfortunately, reality had different plans in store. Even after revising the terms of the debt to offer a 12.5% all-in yield instead of the original 11.25% interest rate, there was still insufficient interest from the investment community to gather the $1 billion. This foray ended when management decided to withdraw its offering. Either the market was not confident about the projections, investors were not confident about management, or some combination of the two. Obviously, we are currently in a rising interest rate environment and it is uncertain what the future holds for energy prices. These factors also could have played a role in what transpired.

Refusing to give up, CEO Charif Souki announced that the company will instead seek equity partners in order to help finance the project. His claim is that pulling the bond offering will put in jeopardy the ability of the company to deliver gas on the schedule it was hoping to. But he reiterated that the fundamentals of the project remain strong. Although seeking equity investors could definitely get the job done, the question becomes one of the cost to current shareholders. Dilution for investors would be significant considering that the company’s current market capitalization is roughly $1.78 billion as of this writing. And if the company starts issuing common stock to fund the deal, it could push its share price down considerably depending on how the firm’s existing assets are being valued. Of course, the company could opt to take a minority position in the LNG terminal and related activities. That would avoid much of the dilution problem. But it would also cut out most of the upside as well.

Unfortunately, the historical financial performance of the company more broadly has not been that impressive. This much can be seen in the chart above, which shows revenue and various measures of profitability over the past three years. And in the chart below, you can see financial performance covering the first half of the 2022 fiscal year compared to the first half of the 2021 fiscal year. Clearly, Tellurian is generating significant cash outflows at this time. When coupled with the company’s existing problems, I would normally say that this might be a bankruptcy scenario. However, the firm may have one opportunity to salvage its operations.

Earlier in this article, I mentioned the Haynesville purchase the company made. That particular set of assets helped to increase the company’s upstream net acreage from 15,000 to 20,000 and to increase its natural gas production from 270 MMcf per day to 350 MMcf per day. Never mind the fact that in the second quarter of this year, investments in production helped to increase natural gas output by 47% compared to the first quarter of this year. In June of this year, management, citing strip pricing from June 24th as a base, said that annual EBITDA starting in 2023 should be around $400 million assuming the company spends $300 million in capital to achieve it. However, at that time, the board of directors had not yet approved such a budget.

The Haynesville acquisition was expected to add between $90 million and $120 million in field-level EBITDA to the company, with that number after various costs coming in at between $60 million and $90 million per year. Combined with the company’s other assets, this kind of EBITDA generation would require around $330 million annually in order to achieve. That would still leave around $145 million in extra cash flow to handle interest expense and other costs. Current interest expense per year is only around $35 million. So, in theory, the company could be positive from an operating cash flow perspective with said assets. The company also has cash in excess of debt of $229.6 million. But this was before the company acquired the Haynesville assets. It’s not unthinkable though that, with cash still in excess of debt, the company could borrow a sizable amount of cash and grow its natural gas production capabilities. Though not ideal, the company could easily borrow over $800 million and still have a net leverage ratio of around 1.5, which is still considered any healthy range in the oil and gas exploration and production space. And with an enterprise value right now of $1.69 billion, TELL stock is already priced at levels that would be realistic for the amount of EBITDA the company can generate. But of course, this assumes that there is nothing in any of its other projects, such as the $240 million pipeline investment it committed to in June of this year, that would prohibit this or that would stop the company from pivoting.

At this moment, the financial situation for Tellurian is complicated. The company is fundamentally in an interesting spot and it’s possible that its Driftwood LNG project may never get built. I do still find myself scratching my head as to why the deal ultimately fell through. Yes, market conditions are abnormal. But not severe enough to prevent the company from raising cash on what could only have been described as onerous terms. Regardless, if the company does continue along this path, it’s unclear what the future holds. It cannot stand to hemorrhage cash like it has been in perpetuity if it’s not funding this with outside capital. There may be an opportunity for the company to pivot significantly. But even that is speculative. All of this leads me to take a rather neutral stance on the company, recognizing that there could be some upside if things go well but also acknowledging that the risk associated with that upside is certainly elevated.