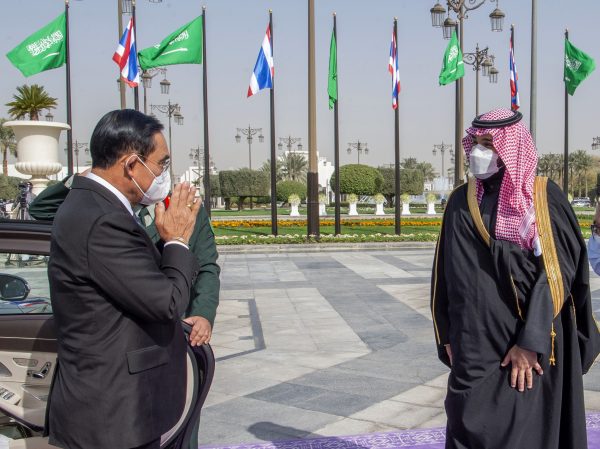 Thailand’s prime minister arrived in Saudi Arabia on Tuesday for the first high-level meeting since relations between the nations soured three decades ago over a sensational jewelry heist that led to a diplomatic row and string of mysterious killings.

The official visit by Thai Prime Minister Prayut Chan-o-cha to Riyadh signals the nations are seeking to thaw ties, long chilled by the 1989 scandal. Saudi Arabia downgraded its diplomatic relations with Thailand over the theft that became known as the Blue Diamond affair.

While Prayut’s visit marked a major breakthrough, his discreet arrival in the country hinted at lingering tension. A notably low-ranking official, the deputy governor of Riyadh, received the prime minister at the airport without the typical live TV report.

Hours later, however, the country’s powerful Crown Prince Mohammed bin Salman gave Prayut more of a royal welcome, guiding the prime minister down the lavender carpet rolled out for important state visits and taking him to the king’s Al-Yamamah Palace for talks.

The Saudi government statement about the visit was vague, saying only it showed the kingdom’s “keenness to strengthen joint relations and build bridges of communication with all countries around the world.”

A priceless 50-carat blue diamond was among an estimated $20 million worth of gems and jewelry pilfered by a Thai janitor from a Saudi prince’s palace in the heist that wrecked relations between the countries. The kingdom stopped issuing and renewing visas for hundreds of thousands of Thai workers, suspended permits for thousands of Thai Muslims hoping to make the annual hajj pilgrimage to Mecca, and warned its citizens not to travel to Thailand.

Three Saudi diplomats seeking the valuables’ return were shot dead in Bangkok. A Bangkok-based Saudi businessman believed to have been hunting for the missing jewels also disappeared, and was presumed killed. No one was convicted for the killings.

The Thai police claimed to have solved the case, but many of the jewels they sent back to Riyadh were fake. Thai media crackled with reports that the wives of top officials had been spotted wearing diamond necklaces that bore an uncanny resemblance to the stolen jewels. The fabled blue diamond was never recovered.

The saga exposed the graft and abuse of power that runs rampant in Thailand’s police forces as speculation mounted that senior officers and members of the elite had kept the stones and ordered a cover-up.

Thailand, deprived by the dispute of billions of dollars in badly needed tourism revenues and workers’ remittances, long has wanted to patch up relations with oil-rich Saudi Arabia.

Saudi Arabia, in a push to modernize and diversify its economy away from oil, is now trying to to draw foreign tourists and investors and overhaul its reputation as one of the world’s most closed countries with a bleak human rights record.