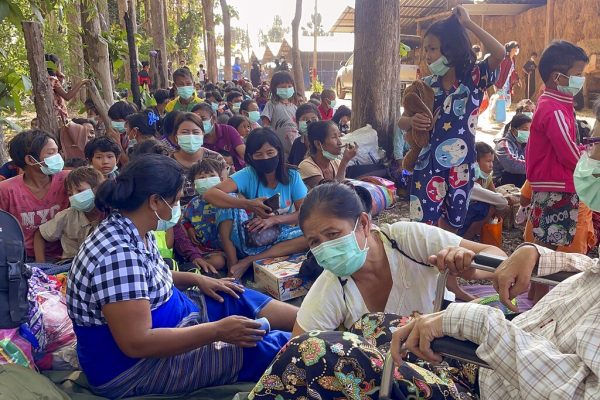 Authorities in Thailand have sent over 600 Myanmar refugees who fled ongoing fighting between the military and ethnic rebels in Karen State back across the border, according to a report yesterday from Reuters that cited a senior Thai official.

The people were among several thousand who fled across the Moei River into Thailand when fighting broke out last week around the town of Lay Kay Kaw between the Myanmar military and the Karen National Union (KNU), the country’s oldest rebel force.

Somchai Kitcharoenrungroj, the governor of Thailand’s Tak province, told Reuters that 623 refugees had been sent back while 2,094 remained on the Thai side. He said that all would be returned if they were willing. “More people are willing to go back as they are worried about their property there,” Somchai said.

Some of the refugees who reached northwest Thailand’s Tak province confirmed to Reuters before they went back over the border on Sunday morning that they had volunteered to return. But the extent to which the returns were truly voluntary remains unclear, and reports today suggest that fighting in the region, and the flight of the civilian population, remains ongoing, with an estimated 5,000 displaced  people currently sheltering in Palu village, just inside the border with Thailand.

The crossborder flight was the biggest since late March, when several thousand villagers from Karen State fled to Thailand following airstrikes by Myanmar’s junta on KNU territory, who were later forced back across the border by Thai authorities.

The ongoing clashes around Lay Kay Kaw speak to the extent to which February’s coup d’etat has inflamed the country’s long-running ethnic conflicts, reversing the limited progress attained under the past two administrations, and severely impacting civilians living in affected areas. Prior to last week’s fighting, the post-coup crisis had displaced over 284,000 people, with an estimated 22,000 refugees fleeing to India and Thailand.

Last week’s fighting broke out after 200 troops raided Lay Kay Kaw town on December 14, and arrested more than 30 people associated with the organized opposition to the military government. According to the Irrawaddy, this included at least one elected lawmaker from Aung San Suu Kyi’s National League for Democracy party, which was due to take office on the day of the coup.

In late November, the junta accused the Karen National Liberation Army, the KNU’s armed wing, of organizing military training for civilian resistance forces, sheltering those evading arrest by the regime, and supplying arms to groups engaged in urban guerrilla warfare in other parts of the country.

Lay Kay Kaw, which is under the de facto control of the KNU, has become a popular destination for striking civil servants and pro-democracy activists who have fled from other parts of Myanmar following the military’s violent crackdown on anti-coup protests.

The town is a symbolic target. As The Irrawaddy explains, the town developed with the support of Japan’s Nippon Foundation in 2015, a year after the KNU and the semi-civilian government of the time initiated programs to repatriate thousands of people from the large refugee camps that are dotted along the Thai-Myanmar border.

The fact that the town has now become the subject of military assaults has not only cast these (overoptimistic) plans into disarray; they suggest that Myanmar’s interconnected political and humanitarian crises will continue generating flows of refugees into Thailand as long as the military junta remains in charge.