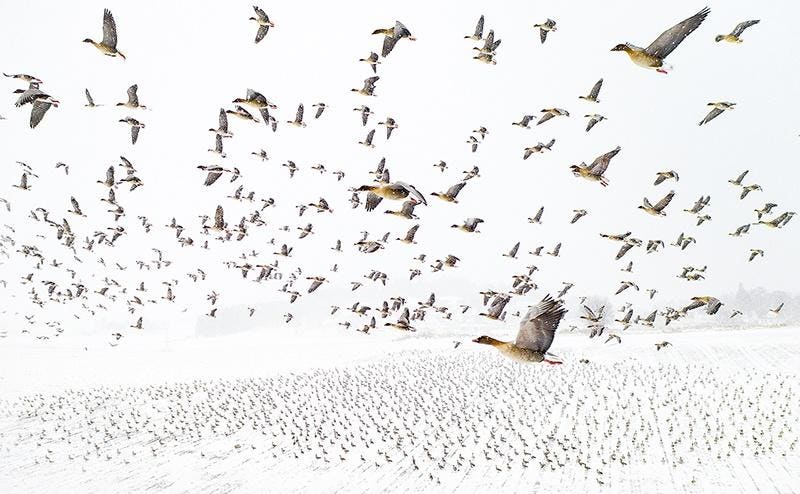 The Nature Photographer of the Year (NPOTY) has announced the amazing winners of its 2021 prestigious competition, which this year fielded a record number of competing images from more than 97 countries.

Presented by Nature Talks, the organization also responsible for the Nature Talks Photo Festival which takes place annually in the Netherlands, the title of Nature Photographer of the Year 2021 was given to Terje Kolaas from Norway for his image of thousands of Pink-footed Geese in flight during their winter migration.

The photo was taken literally from the photographer’s garden as some 80,000 birds made a stopover in the Trondheim fjord wetland system on their annual journeys every spring and autumn between the wintering grounds in Denmark, the Netherlands and the breeding grounds in Spitsbergen, Norway.

“This photograph immediately grabbed our attention, in large part due to the novel perspective it provides — a view of Pink-footed Geese migration from within the airborne flock,” juror Tony Wu explained.

The image against a pure and clean snowy landscape, taken by a drone, is at once uplifting in mood, aesthetically pleasing, well-composed and unique.

The competition can be entered in 12 different categories and also for the Fred Hazelhoff portfolio award — the latter was won by Lea Lee Inoue, a photographer from the United States. She created an interesting and cute photo project of a round-tailed ground squirrel family.

All the category winners, runners-up and highly-commended photos can be seen on www.naturephotographeroftheyear.com.

Open to professional and non-professional photographers of all ages from around the world, the competition registration starts on December 27, 2021, for the Nature Photographer of the Year 2022 edition.

People can also vote for their favorite photo for The People’s Choice Award from January 18 until March 18, 2022.

The Nature Talks Photo Festival 2022 will take place on November 12 and 13.

A staff member at Harajuku’s most popular otter café feeds an Asian small-clawed otter (Aonyx cinereus) a snack. These snacks, often cheese or pet food, are highly unsuited for the otters, whose natural diet consists largely of invertebrates like crabs or shellfish, supplemented by fish.

According to the International Union for Conservation of Nature (IUCN) guidelines for the husbandry of Asian small-clawed otters in captivity, the otter’s feed times should be varied, and hand-feeding should occur only when necessary in order to prevent the development of begging or other stereotypical behavior.

At Japan’s otter cafés, however, the limited space and high concentration of otters and the constant feeding and pampering by staff and guests alike has not only habituated these otters to humans, it has made them dependent upon them.

Asian small-clawed otters are listed as ‘vulnerable’ on the IUCN red list.

Lea Lee Inoue decided to photograph this family of round-tailed ground squirrels, hoping to show that these animals think, feel and have emotions.

Often people think that dogs and cats are the only animals that have feelings. Could it be that people think this because observation is easier with a pet?

Through photography Inoue felt she could show that all animals think and feel emotion.

“This is a paradigm shift in thought that conservation can begin early, at a ground level, with each person awakening to the natural world,” she said. “With this realization comes animal respect, conservation and welfare.”