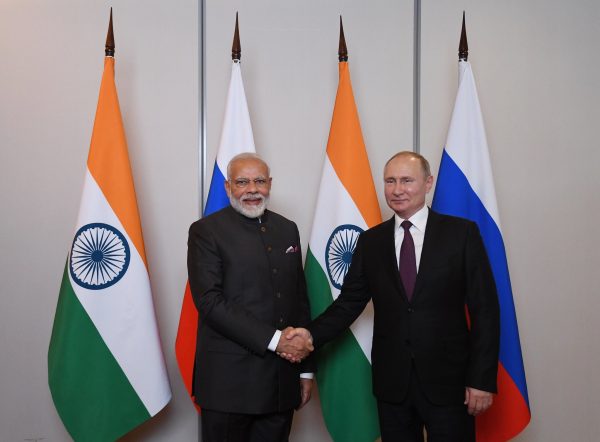 India and Russia have both been hesitant about expanding their influence in the region. Synchronizing their efforts could help overcome those concerns.

As China’s steady accumulation of relative power is getting too close for comfort for its neighbors in Southeast Asia, extra-regional alignments are seen to be a pivotal element for the smaller countries. However, as China continues to be embroiled in a power competition with the United States, Southeast Asian countries have also been wary of using the U.S. as a sole counterweight in the region. It is with this in mind that the attention of these countries has shifted toward the potential roles of Russia and India.

The presence of both countries has been widely accepted and welcomed by the Southeast Asian countries. In fact, there is a great desire among them to encourage New Delhi and Moscow to enhance their involvement in the region. However, with certain limits to each country’s individual Southeast Asian policy, a recalibration can be made toward a more collective approach.

Recently, there have been a series of noteworthy developments in the engagements of both countries in Southeast Asia. During the 10th ASEAN Economic Ministers-Russia Consultations in September, Russia and ASEAN expressed their collective desire enhance and broaden the scope of their cooperation in the economic sphere. This also led to the adoption of a revised ASEAN-Russia Trade and Investment Cooperation Work Program for the period encompassing 2021-2025.

In addition, during the fourth ASEAN-Russia Summit on October 28, Russian President Vladimir Putin virtually met with his ASEAN counterparts and issued a Comprehensive Plan of Action to strengthen cooperation on a wide array of issues. This series of high-level participation indicates Russia’s eagerness to deepen its relations with Southeast Asian countries.

On the other hand, India has also been stepping up its engagements in the region. While in the past, India’s engagements with Southeast Asian countries lacked momentum particularly in the security realm, this year, however, proved to be an important platform for India to proactively demonstrate its willingness to narrow the gap. This can be seen through the signing of several crucial agreements and bolstering high-level interactions with Southeast Asian countries. Moreover, in August, Indian warships took part in major maritime exercises with the navies of Singapore, Vietnam, Indonesia, and the Philippines. Furthermore, during the India-ASEAN virtual meeting, there was a consensus on exploring new areas of cooperation in cybersecurity, climate change, economics, and health.

While both countries have individually done a decent job in making their presence felt in the region, more can be done by expanding their partnership in this geographic space. Russia’s defense diplomacy in Southeast Asia is mostly centered on arms sales and energy cooperation (particularly with Vietnam). However, other levels of engagement remain low. The Russian Navy port calls to Southeast Asia in addition to joint military exercises with regional countries remain marginal and small in scale. Moreover, there has always been a level of wariness for both India and Russia vis-à-vis independent engagements in Southeast Asia amid the intensifying power competition between the United States and China. However, working together in area specific issues can lead to better results.

As Russia has cemented its role as the top arms supplier in Southeast Asia with total sales of $6.6 billion between 2010-2017, India’s efficiency in operating and maintaining Russian military equipment can be leveraged by expanding its training and maintenance services in the region. Moreover, with both countries looking into enhancing the level of joint defense production, this can fuel the reach of their sales amid emerging competition in the region. In addition, amid the pandemic, the vast production of the Russian Sputnik vaccine in India can also add to the value of their partnership beyond the traditional sphere of security. Furthermore, the Chennai-Vladivostok Maritime Corridor adds a crucial dimension to Southeast Asian affairs, and signals how both countries converge in deepening relations in the region.

The evolving partnership between Russia and India can also be highly beneficial for both countries. While Russia’s strategic engagements in Southeast Asia are mostly concentrated in Vietnam, Myanmar, and Laos, India’s broader reach can complement the scope of their partnership. In addition, Russia’s continuous presence in the region will also provide India with more friendly powers in the geographic space. Furthermore, while Russia has been reluctant to individually enhance its presence in Southeast Asia amid the escalating Sino-U.S. power competition, a collective engagement between Russia and India will seem less controversial, and this will allow them to focus more on other levels of engagement in the economic, political, health, and defense spheres beyond the China-U.S. dynamics.