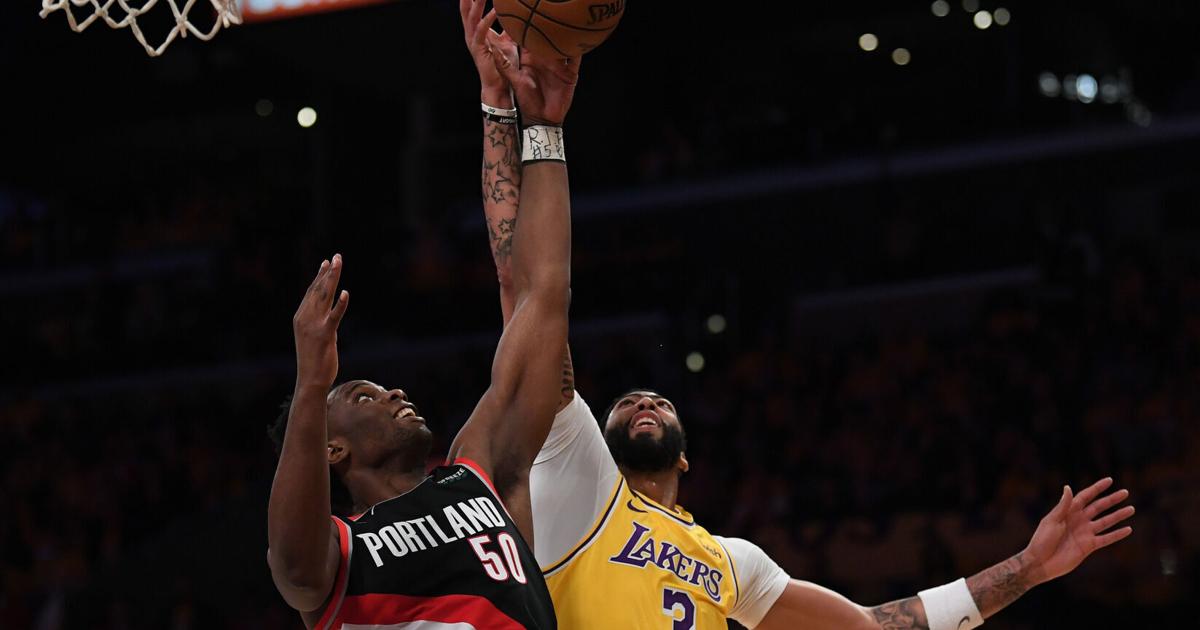 Here’s a look at trending topics for June 21.

The basketball world awoke to heartbreaking news Tuesday when the Purdue Boilermakers announced the death of Caleb Swanigan, a gentle giant who spent three seasons in the NBA with the Sacramento Kings and Portland Trail Blazers.

The Purdue men’s basketball program made the announcement on social media, tweeting: “Devastated. Our thoughts and prayers to Caleb Swanigan’s family and friends. The world lost a gentle soul last night. Love you Biggie.”

Tesla is moving ahead with plans to layoff about 10% of its salaried staff, CEO Elon Musk said Tuesday. But he also expects the company’s overall workforce will be larger a year from now than it is today.

Musk has been sending out conflicting signals on his staffing plans for the last month. And he provided only slightly more clarity in comments via video Tuesday at the Qatar Economic Forum.

One of Elon Musk’s children has petitioned a California court to recognize her new name and gender, saying she no longer wishes to be related to her famous and wealthy father “in any way, shape or form.”

Musk’s daughter turned 18 earlier this year and made the filing with a county court in Los Angeles soon thereafter.

Brooks Koepka, a four-time major champion, is the latest golfer to join the Saudi-back LIV Golf Invitational Series, according to multiple reports.

LIV Golf is expected to announce the news of the former world No.1, who is currently ranked 19th, to its series “in the coming days,” ESPN reports.

The LIV Golf series, which began in London this month, is a new tour organized by LIV Golf Investments which consists of eight events across the world. But the event is contentious, and as a result of joining LIV Golf, Koepka is expected to be banned from the PGA Tour.

Ben Stiller is still processing the devastation he witnessed while visiting Kyiv, Ukraine, this week to meet with President Volodymyr Zelenskyy.

In a Tuesday interview with “BBC Breakfast,” the actor and director reflected solemnly on his trip to the besieged nation, which has been under attack from Russia since February. On Monday, Stiller spoke with Zelenskyy after spending time with survivors living in occupied settlements of the Kyiv region.

Stiller, an ambassador to the U.N. High Commissioner for Refugees, told the morning program that he had never entered “an area that’s in conflict” before his visit to Ukraine.

The House Jan. 6 committee has heard chilling, tearful testimony that Donald Trump’s relentless pressure to overturn the 2020 presidential election led to widespread threats against local workers and state officials. The panel focused Tuesday on the “heroes” of democracy — election workers and officials who fended off the defeated president’s demands. The committee is focused on Trump’s schemes to reject state tallies and electors, all fueled by his false claims of election fraud. It heard from Arizona’s Republican state House Speaker Rusty Bowers and Georgia Secretary of State Brad Raffensperger about pressure from Trump, including Trump’s call asking the Georgia official to “find 11,780” votes to prevent Joe Biden’s victory.

Katie Britt has won the Republican nomination for Senate in Alabama, defeating six-term Congressman Mo Brooks in a primary runoff after former President Donald Trump endorsed and then un-endorsed him. The loss ends a turbulent campaign for Brooks, a conservative firebrand who had fully embraced Trump’s election lies and had run under the banner “MAGA Mo.” But it wasn’t enough for the former president, who initially backed Brooks in the race to replace retiring Sen. Richard Shelby, but then rescinded his support as Brooks languished in the polls. Trump eventually endorsed Britt in the race’s final stretch after she emerged as the top vote-getter in the state’s May 24 primary.

President Joe Biden says he’s considering pressing for a holiday on the federal gasoline tax. That could possibly save U.S. consumers as much as 18.4 cents a gallon. Biden told reporters Monday that his decision could come by the end of the week. The administration is increasingly looking for ways to spare the public from higher prices at the pump, which began to climb last year and surged after Russia invaded Ukraine in February. Gas prices nationwide are averaging just under $5 a gallon, according to AAA. Taxes on gasoline and diesel fuel help pay for highways.

President Joe Biden has signed off on giving federal wildland firefighters a hefty raise for the next two fiscal years. The move announced Tuesday affects more than 16,000 firefighters and comes as much of the West braces for a difficult wildfire season. Pay raises for the federal firefighters had been included in last year’s $1 trillion infrastructure bill, but they had been held up as administration officials studied recruitment and retention data to decide where to deliver them. Agencies are authorized to increase the base salary of federal wildland firefighters by $20,000 per year or 50% of their current base salary, whichever is lower.

Federal officials say most of Yellowstone National Park should reopen within the next two weeks. Record floods pounded the region last week and knocked out major roads. Yellowstone’s superintendent said the park will be able to accommodate fewer visitors for the time being, and it will take many months to re-connect the world-renowned park’s roads with some southern Montana communities. Yellowstone will partially reopen at 8 a.m. Wednesday. Only portions of the park that can be accessed along its “southern loop” of roads will be opened initially and access to the park’s scenic backcountry will be for day hikers only. Within two weeks officials plan to also open the northern loop.

The nation’s youngest children are getting their chance at vaccines for COVID-19. Shots began Monday at a few locations, though they were expected to ramp up after the Juneteenth federal holiday. The Food and Drug Administration cleared vaccines from Moderna and Pfizer last week and the Centers for Disease Control and Prevention gave the final signoff over the weekend.  Roughly 18 million youngsters under 5 are eligible. For the little kids, Pfizer’s vaccine is three shots and Moderna’s is two shots. Getting some parents on board may be a challenge given disappointing vaccination rates in school-age kids.

Thousands of druids, pagans and New Age revelers have greeted the summer solstice at Stonehenge on the longest day of the northern hemisphere year. Wiltshire Police said about 6,000 people gathered at the ancient stone circle in southern England to watch the sun rise at 4:49 a.m. Tuesday. Police said the atmosphere was “convivial” and there were only two arrests. It was the first time revelers have been permitted to gather for the solstice since 2019 because of the coronavirus pandemic. Stonehenge was built between 5,000 and 3,500 years ago. It is aligned so that on summer solstice the sun rises behind the Heel Stone and rays of sunlight are channeled into the centre of the circle.

Ukraine’s leader has told the African Union that the continent has been “taken hostage” in Russia’s invasion of Ukraine amid catastrophically rising food prices. President Volodymyr Zelenskyy’s closed-door speech Monday followed weeks of requests for him to address African nations. Many of them retain close ties to Russia and failed to support a U.N. General Assembly resolution condemning the invasion. Ukraine and the West hope to weaken those ties by emphasizing that Russia’s actions are to blame for dramatic shortages of wheat and edible oils and skyrocketing food and fuel prices across Africa.

An Israeli Cabinet minister says the country’s outgoing coalition government will fast-track a bill this week to dissolve parliament, setting up the country for its fifth elections in three years. Welfare Minister Meir Cohen told Israeli public broadcaster Kan on Tuesday that the coalition would bring the bill to a preliminary vote the following day. Prime Minister Naftali Bennett said on Monday that he would disband his alliance of eight diverse parties and send the country to the polls. New elections — the country’s fifth in just over three years — are likely to be scheduled for October and raise the possibility that longtime leader Benjamin Netanyahu, now opposition leader, will be able to stage a comeback.

Thousands of dogs are competing at the illustrious Westminster Kennel Club Dog Show. Judging toward the best in show prize began Monday. Some basics on the big show: It features more than 3,000 canines, as wee as Chihuahuas and as massive as mastiffs. The contestants represent 209 breeds and varieties. First, dogs go up against others of their breed. The winner from each breed moves on to a semifinal round, where they’re judged against others in their “group” – such as hounds, herding dogs or terriers. In the final round, the group winners compete for best in show, which will be awarded Wednesday night.

Steven Stamkos, Pat Maroon and Ondrej Palat each had a goal and an assist, and the Tampa Bay Lightning scored four times in the second period and beat the Colorado Avalanche 6-2 in Game 3 of the Stanley Cup Final. Anthony Cirelli, Nicholas Paul and Corey Perry also scored to help the two-time defending champion Lightning bounce back after playing poorly while losing the first two games on the road. Nikita Kucherov and Victor Hedman had two assists, and Andrei Vasilevskiy stopped 37 shots. Stamkos, Paul, Maroon and Perry scored in the second period, when the Lightning chased Colorado goalie Darcy Kuemper while pulling away to trim their series deficit to 2-1. Gabriel Landeskog had two goals and Mikko Rantanen had two assists for the Avalanche. Game 4 is Wednesday night.