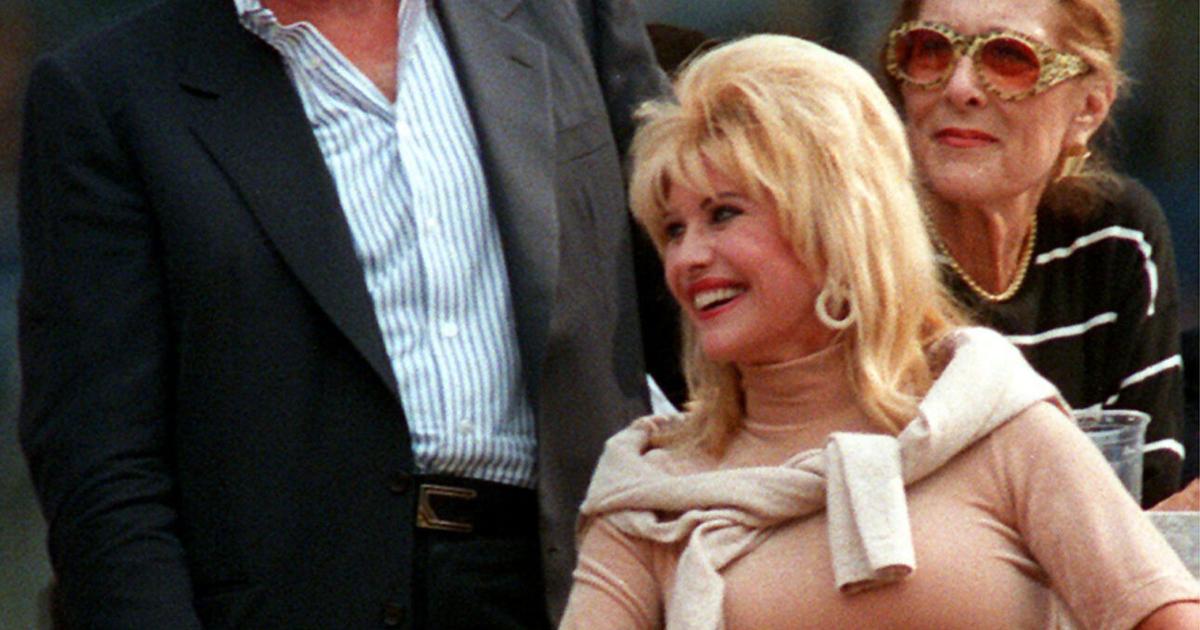 Here’s a look at trending topics for today, July 14.

Ivana Trump, a skier-turned-businesswoman who formed half of a publicity power couple in the 1980s as the first wife of former President Donald Trump and mother of his oldest children, has died in New York City, her family announced Thursday. She was 73.

The former president posted on his social media app that she died at her Manhattan home.

“She was a wonderful, beautiful, and amazing woman, who led a great and inspirational life,” he wrote on Truth Social. The couple shared three children, Donald Jr., Ivanka and Eric.

The Old Course was never faster. The pace of play was never slower.

The celebrated start Thursday of the 150th British Open gave way to Cameron Young making his debut with an 8-under 64 for a two-shot lead over Rory McIlroy, and Tiger Woods making what could be his last competitive appearance at St. Andrews a short one.

His score would indicate as much. Woods began his round by hitting out of a divot into the Swilcan Burn for a double bogey. He ended it by taking three putts through the Valley of Sin for a par and a 78, his second-worst score in his Open career.

The war in Ukraine has even shaken up Bastille Day, a powerful political, historical and symbolic event in France.

France celebrated its national holiday Thursday with thousands of French troops marching down the Champs-Elysees Avenue in Paris alongside allies from Eastern Europe. The parade also featured warplanes, military vehicles and a drone in a performance showing off France’s might and its military efforts to support Ukraine.

In a Bastille Day nationally televised interview, French President Emmanuel Macron warned his compatriots that the worst war that Europe has faced in decades “will continue” and defended Europe’s sanctions strategy.

The U.S. is getting another COVID-19 vaccine choice. The Food and Drug Administration on Wednesday cleared Novavax shots for adults. It’s a more traditional type of vaccine than the Pfizer and Moderna shots already used to protect most Americans. Still, millions of adults haven’t yet gotten vaccinated even this late in the pandemic. Experts expect at least some of them to roll up their sleeves for the more conventional technology. The Centers for Disease Control still must recommend how to use the Novavax vaccine before shots begin. The U.S. has bought 3.2 million doses.

Ukrainian officials say Russian missiles that struck a city in central Ukraine killed at least 23 people and wounded more than 100 others, including children, while dozens were missing. Officials say cruise missiles fired from a Russian submarine in the Black Sea struck a medical center, stores and residential buildings in Vinnytsia, a city southwest of Kyiv, the capital. Ukrainian President Volodymyr Zelenskyy is accusing Russia of intentionally aiming missiles at civilians and repeating his call for Russia to be declared a state sponsor of terrorism. One military analyst thinks Thursday’s attack mirrors previous ones on residential areas that Moscow has launched “to try to pressure Kyiv to make some concessions.”

U.S. President Joe Biden and Israeli Prime Minister Yair Lapid stood side-by-side and declared they would not allow Iran to become a nuclear power. But they diverged on how to reach that outcome. Biden says he still wants to give diplomacy a chance while Lapid insists that tough words alone won’t thwart Tehran nuclear ambitions. Biden is also stressing the importance of furthering ties between Israel and its Arab neighbors. Hours before he was set to become the first U.S. leader to fly directly from Israel to Saudi Arabia, that kingdom’s General Authority of Civil Aviation signaled the end of its longstanding ban on Israeli airliners overflying its territory.

Protesters have retreated from government buildings in Sri Lanka, restoring a tenuous calm to the economically crippled country. And the embattled president at last emailed the resignation that demonstrators have sought for months. President Gotabaya Rajapaksa fled a day earlier under pressure from the protesters enraged by the island nation’s economic collapse. An official said he finally emailed his resignation a day later than promised. But the crisis was far from over because he has further angered the crowds by making his prime minister the acting leader. Protesters have pressed for both men to leave and for a unity government to address the economic calamity that has triggered widespread shortages of food, fuel and other necessities.

Sen. Joe Manchin is roiling budget talks with Democratic leaders anew. The West Virginia Democrat says the latest inflation surge makes him more cautious about agreeing to federal spending increases that could drive consumers’ costs even higher. In December, Manchin single-handedly killed Democrats’ roughly $2 trillion, 10-year social and environment bill before Christmas. In recent months, he’s been bargaining with Senate Majority Leader Chuck Schumer over a new economic package that would be around half that size and focus on health, energy and taxes. But Manchin says grim new inflation figures mean the compromise he’s trying to reach with Schumer must be reviewed.

Conservative lawmakers in Britain have knocked another contender out of the contest to replace Prime Minister Boris Johnson. Attorney General Suella Braverman secured the fewest votes from her colleagues Thursday and was eliminated from the race, leaving five contenders. Former Treasury chief Rishi Sunak is battling to stave off momentum from junior trade minister Penny Mordaunt. Sunak got the most votes, 101, with Mordaunt a strong second with 83.  Bookmaker Ladbrokes said Mordaunt is now the favorite to win, followed by Sunak and Foreign Secretary Liz Truss. Further rounds of voting will take place next week until just two candidates remain. Those two will face a runoff vote by about 180,000 Conservative Party members.

The drug possession trial of WNBA star Brittney Griner has resumed, with the head of the Russian club she plays for in the offseason and a teammate from that squad testifying in support of her character and what she has meant for women’s basketball in the country. Griner, who pleaded guilty last week, did not testify as expected at the third day of the trial. She has been detained in Russia since February, and the U.S. government is under pressure at home to do more to secure her freedom. Her guilty plea could be an effort to expedite the court proceedings so any negotiations about a prisoner exchange could move forward.

A wildfire that threatened a grove of California’s giant sequoias in Yosemite National Park is burning eastward into the Sierra National Forest. The Washburn Fire has grown to 6.6 square miles and is only 23% contained. The fire broke out July 7, when visitors to the Mariposa Grove of ancient sequoias reported smoke. The cause remains under investigation but officials say it is human-related because there was no lightning at the time. The fire has closed a southern section of Yosemite. Wildfires have grown more intense amid drought and climate change. The National Interagency Fire Center says the number of fires and acres burned in the U.S. so far this year is well above average.

The House has approved a significant expansion of health care and disability benefits for millions of veterans who were exposed to toxic burn pits while serving in Iraq and Afghanistan. The vote all but assures the measure will soon go to President Joe Biden to be signed into law. The Senate will have to vote again because of a technical fix the House made to the bill, but the essence of the bill is the same as the one senators overwhelmingly passed last month. The measure expands access to health care through the Department of Veterans Affairs and will make it easier for many veterans to get disability payments.

Attorneys for Sen. Lindsey Graham say he wasn’t trying to interfere in Georgia’s 2020 election when he called state officials to ask them to reexamine certain absentee ballots after President Donald Trump’s narrow loss to Democrat Joe Biden. The arguments came in a court filing Tuesday as Graham challenges a subpoena compelling him to testify before a special grand jury in Georgia that’s investigating Trump and his allies’ actions after the 2020 election. Graham was one of a handful of Trump confidants and lawyers named in petitions filed last week by Fulton County District Attorney Fani Willis.

Oscar-winning actor Kevin Spacey has pleaded not guilty to charges of sexually assaulting three men a decade or more ago. Spacey entered the plea Thursday during a hearing at London’s Central Criminal Court. The former “House of Cards” star, who ran London’s Old Vic theater between 2004 and 2015, is accused of four counts of sexual assault and one count of causing a person to engage in penetrative sexual activity without consent. The incidents allegedly took place betwen 2005 and 2013. The victims are now in their 30s and 40s. Judge Mark Wall set a date of June 6, 2023 for the trial to start and said it would last three to four weeks.