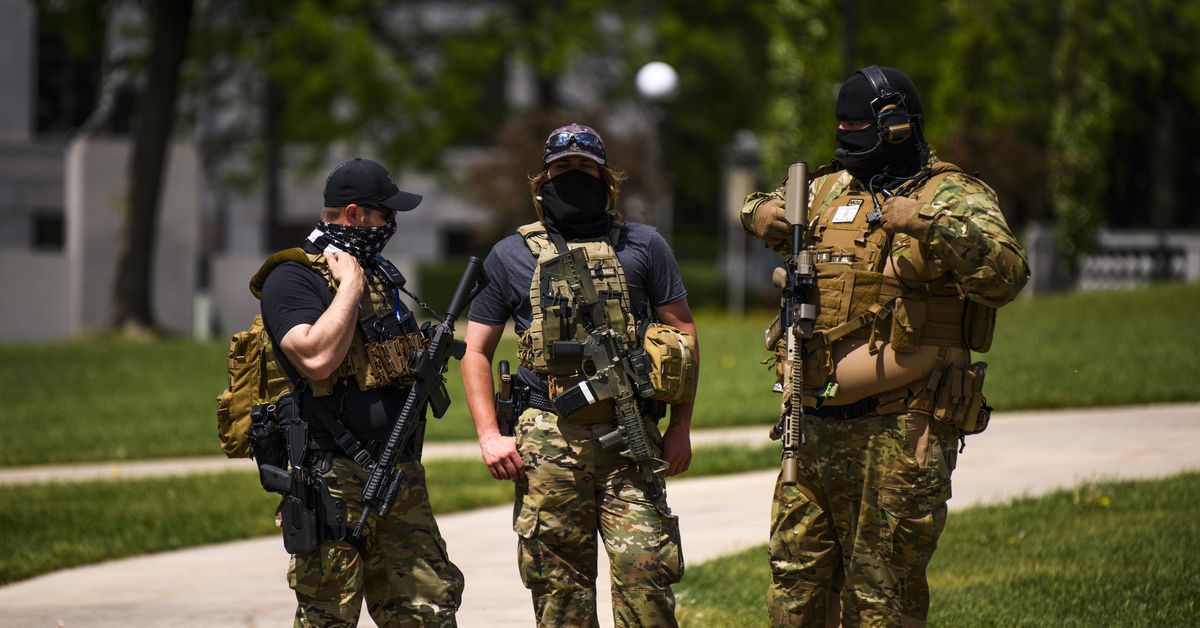 If you follow conservative politics, you know that the state of masculinity in America has been a hot topic this past year.

Republicans like Josh Hawley, a senator from Missouri and a star of the New Right, have made masculinity a signature issue. In a recent speech at the National Conservatism Conference, for example, Hawley argued that the progressive left is trying to “deconstruct” the American man. That’s quite a statement, and whether you agree with it or not, it’s crucial to grapple with its appeal and how it’s shaping our politics.

I reached out to David French, a senior editor at The Dispatch — a center-right publication that’s been critical of the Trumpist turn in conservatism — and now a contributing writer for the Atlantic, for the latest episode of Vox Conversations. French tracks conservative politics as closely as anyone, and recently wrote about what he calls “the cult of toughness” on the American right.

We discussed how Trump became the model of masculinity for Republicans, what exactly the right thinks the left is doing to the American man, and how the anger and response to that has helped pave the way for eruptions of political violence like the assault on the Capitol last January.

Below is an excerpt from our conversation, edited for length and clarity. As always, there’s much more in the full podcast, so subscribe to Vox Conversations on Apple Podcasts, Google Podcasts, Spotify, Stitcher, or wherever you listen to podcasts.

I say all that because I want to at least try to steelman the conservative point of view here, and you’re better positioned to do that since you’re a conservative.

So what exactly does the right think the left is doing to the American man?

This is a good example of the kind of thing that a lot of folks are worried about on the cultural right, and I think justifiably so: The American Psychological Association, back in late 2018, early 2019, put out these guidelines for psychological practice with boys and men. Essentially, what it says is traditional masculinity is harmful, and this is one of the ways that a person defined it on their website: that traditional masculinity, marked by stoicism, competitiveness, dominance, and aggression, is on the whole harmful.

The guidelines themselves say that traditional masculinity ideology — which is defined with socializing boys toward anti-femininity, achievement, eschewal of appearance of weakness, and adventure, risk, and violence — limits their psychological development. I have real problems with that formulation.

Now, there are some characteristics in there that they mention, like dominance, that are, I think, actually problematic in almost all forms. Or “anti-femininity” — I’m not even sure exactly what that means, it might be a “you know it when you see it.” But other things such as achievement, stoicism — I mean, believe you me, there are times in life when stoicism is an absolute virtue, especially in times of crisis. Going back to my military experience — I served with the 3rd Armored Cavalry Regiment — and I saw men react in moments of incredible crisis with an unbelievable degree of calm. That was a virtue.

Aggression can be virtuous, or it can be deeply problematic. These things are characteristics, not vices, by and large. So what does a healthy masculinity do? It channels these characteristics toward virtue and away from vice. Not to get too stereotypical, but that’s essentially what you’re talking about when you’re talking about, say, how a Marine Corps boot camp turns a boy into a man.

There’s a real danger in this kind of warrior mindset — which I think is necessary and has its place — when it’s severed from any ethos of restraint and compassion, and when it’s just about destroying the enemy or owning the libs or defying norms, that’s very bad.

Well, that’s the difference between character formation and indulgence. So if you’re talking about people who might have aggressive instincts or they might be highly achievement-oriented and you just indulge all of that, you give in to that id, then two things end up happening at once, which is interesting: This is the stereotypical bully — the bully at the one end is intimidating where he can intimidate, but cowardly where he’s in danger.

This is the essence of the Trump persona himself. I mean, Trump is a guy, for example, who when he can feel like he can intimidate and bully, he’s all in. When there’s real risk to himself, he’s all out.

“They know their own vulnerability. I think they know that they’re vulnerable to a better vision.”

I guess my big worry is that a lot of this masculinity panic feels rage-driven, and there’s no real positive content. It’s all negation, it’s all rejection, and I hear the rhetoric from people like Josh Hawley and J.D. Vance about defending order and affirming this or that virtue, but on the ground, Fox News-level, it’s mostly about hating the enemy and wanting to extinguish it. And that leads to anti-politics, to violence as a substitute for politics.

You expressed something similar when you wrote that the “logic of this movement presses toward direct action.” What did you have in mind there?

I had in mind January 6. I had in mind what might happen in the next election cycle. I had in mind the avalanche of threats directed toward public officials. I had in mind the fact that we’ve had people who’ve had to essentially go into hiding because of the stands they’ve taken, stands of real integrity, to defend the very existence of our democracy.

That’s not just Twitter trolling. It’s not just posturing online anymore. It’s the logic of a movement centered around aggression divorced from virtue that indulges in apocalyptic rhetoric. It’s heading exactly where such movements head, and everyone who in 2015 or 2016 was dismissing the alt-right and Trump’s Twitter trolls says, “Oh, that’s just Twitter. That’s just Twitter.” There was an inexorable moral logic that was going to lead to action in the streets.

To argue that, “Well, that was a one-time thing. Everybody got carried away” — no. No, no, no. That was the result of rhetoric and conduct that put a specific group of people together on January 6 to provide cover for an attempted coup. Many of the architects of that exact plan are still some of the most revered figures in Republican life right now.

I’m glad you went there, because these may seem like separate issues for a lot of people, but I don’t think they are. The support for the kind of violent illiberalism we saw on January 6, the justification for it, stems from the contempt for the perceived weakness of the left, and the belief that there’s a poison in our culture that has to be exterminated at all costs.

I remind people that Trump himself stepped to the podium a few hours before the Capitol was sacked and said, “Our country is under siege. You’re the people that built this nation and we fight like hell, and if you don’t fight like hell, you’re not going to have a country anymore.” That’s dangerous.

In red world, being called a racist — that accusation has no purchase, really. Here’s what’s the terrifying thing on the right that can be a career- and reputation-ending allegation: “You’re weak. You’re a coward.”

So the transformation, this flipping upside down of morality, turning bullying into strength, turning restraint into vice, all of that, what has then happened is it enables the Trumpists and the Trumpist world. They’re wielding this sword that is very sharp culturally in red spaces, this accusation of weakness and cowardice, as a weapon to keep people in line, because they’ve defined support for this movement as evidence of your strength.

In that world, capitulation to the mob is seen as courage, is seen as strength, and that’s upside down and backward.

You’ve been called weak and cowardly as much as anyone on the right for your criticism of Trumpism. I won’t ask how that makes you feel, since I’m sure it pisses you off, but what’s your response to it?

At this point, you just have to laugh at it, to be honest, because if you had walked in my family’s shoes over the last six years, that’s not an allegation that you would make. I’ve written about this going all the way back to 2015, when the first attacks on our family started rolling in, and the things we’ve walked through in the last six years are just absurd, just an absurd level of not just moral or peer pressure, but outright acts of intimidation and threats and harassment.

It’s just unbelievable, and then to turn around and say, “The strong thing to do, David, the courageous thing to do would be to give in to these bullies.” That makes no sense at all.

I really do believe the ultimate choice is between conversation and violence. But I don’t think it’s too late, I really don’t. Things have been much, much worse than they are now. But we have to pull back and we have to do it soon. How does that start?

Well, let’s say bad news, good news. So I think the bad news is this idea that we might reach a point where millions of Americans who were all-in for Trump will essentially give some version of mea culpa — I don’t think that something like that is in the cards.

I think the way things change is people move on. It’s not necessarily that they’ll sit there and they’ll say, “I never should have been on this guy’s team.” They’ll just say something like, “Well, let’s not do that again,” or, “I like this other person better.” I think there’s a lot of room for that kind of transformation.

There’s something telling in one of the text messages that was released that the Fox News hosts sent to Mark Meadows on January 6. Laura Ingraham said, “This is hurting all of us.” What you have is this group dynamic on Trumpism where part of the appeal, actually, is they’re all in this together, they’re really all in this movement.

One of the reasons why it’s so hostile toward dissent is, I think, they know their own vulnerability. I think they know that they’re vulnerable to a better vision.

So one of the reasons why people who are “never Trump” politicians, or politicians who once supported Trump now don’t support him anymore, are so viciously attacked is because these people are the threat. Because they offer an alternative conservative vision for this country that is not based on hatred and animosity and aggression and cruelty. They offer an alternative to the J.D. Vance version, which says, “I think our people hate the right people.”

An alternative version of conservatism says, “There are no right people to hate. You don’t hate people. You believe what you believe out of conviction that this is a worldview and a set of policies and ideas that contribute to the flourishing of all of the American people, not just your tribe, and your goal is not to pit American against American.”

There is a vision and a version of conservatism that stands in total contradiction to what the Trumpist right is. I think it still has appeal, and it’s one of the reasons why there is such aggression directed at those who dissent. Because they have memories, most of them except the very youngest, they have memories of a different version of conservatism, one that could motivate people through inspiration rather than aggression, and they know they’re vulnerable to it.

To hear the rest of the conversation, click here, and be sure to subscribe to Vox Conversations on Apple Podcasts, Google Podcasts, Spotify, Stitcher, or wherever you listen to podcasts.