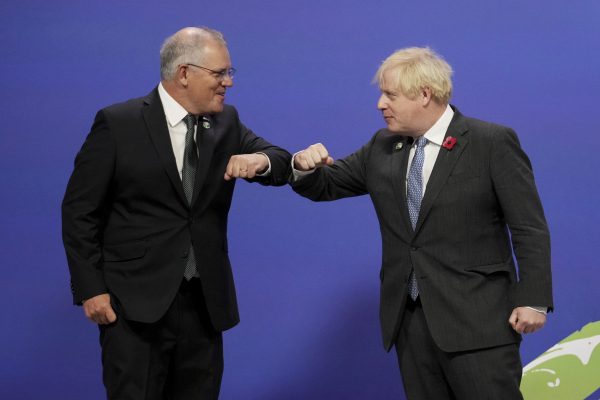 While Global Britain is touted as an opportunity to “shape the world of the future,” it is heavily reliant on ties to the past.

Following its decision to leave the European Union, the U.K. has sought to rebrand itself as Global Britain. While this concept was initially more vague and underdeveloped, the U.K.’s 2021 Integrated Review of Security, Defence, Development and Foreign Policy presents a somewhat more measured and detailed vision. Remaining constant, however, has always been a clear geographical focus on the Indo-Pacific as a site of primary significance for post-Brexit U.K. internationalism. Perhaps ironically, it is also the Indo-Pacific that exposes the inherent constraints and regionalisms of Global Britain. These are evidenced in at least three ways.

First, the Indo-Pacific is the only region afforded significant attention by the U.K.’s Integrated Review, revealing the limitations of its supposedly “global” outlook. In 2018 the U.K.’s Foreign and Commonwealth Office argued that Global Britain can be meaningfully “active in every region [delivering] global security…[and] engaging with the world in every area.” But in 2020 the U.K. announced a reduction in Official Development Assistance, citing a “domestic fiscal emergency” brought by COVID-19, which leaves only “limited resources” for distribution abroad. London has also announced cuts to its human rights and armed forces budgets. The 2021 review provides a more moderate assessment of Global Britain, and a dedicated section only to the Indo-Pacific. In doing so it highlights the exception that proves the rule; with Africa, the Middle East, South America, and much of the rest of the world afforded comparatively fleeting attention, it is essentially the Indo-Pacific alone that provides a vehicle for Global Britain and singularly prevents it from being devoid of substantive meaning.

Second, even within the Indo-Pacific the U.K. seem irresistibly drawn toward familiar regional comfort zones. A notable example is the Anglosphere, highlighted recently by the U.K.’s enthusiasm for AUKUS. In Australia, Prime Minister Boris Johnson argued that the U.K. sees “a kindred nation…and a natural partner.” Its alliance with the United States is still deemed indispensable: the crux of the relationship is considered “a human one,” bound by a “shared history, and a common language.” Two of the U.K.’s first three bespoke post-Brexit trade deals are with Australia and New Zealand, and the Five Eyes intelligence alliance comprising the U.K., U.S., Australia, New Zealand, and Canada is promoted with renewed vigor. The U.K. engages more with Japan, South Korea, and others. However, as the U.K. seeks to “step up onto the world stage” and first and foremost into the Indo-Pacific, it demonstrates a certain unwillingness to depart from long-established regional networks, even if it means damaging others. While Global Britain is touted as an opportunity to “shape the world of the future,” it is heavily reliant on ties to the past.

Third, the U.K.’s post-Brexit trade ambitions in Asia are framed as much by domestic political statements as tangible economic gain. The U.K. is fundamentally reliant on trade with Europe, and it is considered improbable, if not impossible, for the estimated 4 percent reduction to U.K. GDP following Brexit to be offset by any number of deals beyond the EU. The Australia and New Zealand deals, for example, are together expected to add up to just 0.01 – 0.03 percent to U.K. GDP. For the foreseeable future then, the pursuit of Indo-Pacific trade deals is primarily a political performance of distraction to claim symbolic Brexit “victories.” But even the lures of Indo-Pacific trophies cannot mask Global Britain’s reliance on its neighboring locality indefinitely. In time, the U.K.’s political trade theater — currently playing out most publicly in the Indo-Pacific — could become a powerful source of domestic frustration, with demands to focus on fixing problems with Europe. With Brexit projected to bring more long-term harm to the British economy than COVID-19, London’s ambitions in the Indo-Pacific are inescapably bound by, and dependent upon, its economic regionalisms at home.

While the U.K.’s new foreign policy blueprint was broadly well-received, promoting itself abroad as a global power may not be entirely persuasive. But as already suggested, Global Britain is a narrative designed principally for a domestic, rather than an international, audience. Partners in Asia generally welcome enhanced U.K. engagement and its valued specialisms. Yet with “Global” Britain defining a largely region-specific outlook, those partners can be forgiven for wondering what happens when its stretched resources are required elsewhere. In 2017, the U.K. House of Commons Foreign Affairs Committee noted that extra Europe-focused diplomatic resources had already been allocated to ameliorating the effects of Brexit, and that they were partly enabled by cost savings in the Asia-Pacific and South Asia. While the Indo-Pacific offers the U.K. opportunities, the Global Britain brand (as far as one exists) risks its own credibility there. This comes from a danger of over-promising and under-delivering when competing demands become too great. Resources may need to be withdrawn without warning, and their current concentration in the Indo-Pacific means they may be withdrawn from there first. Boris Johnson would like to see the “British lion roar,” but his administration’s grandiose rhetoric risks Global Britain being exposed as a paper tiger.