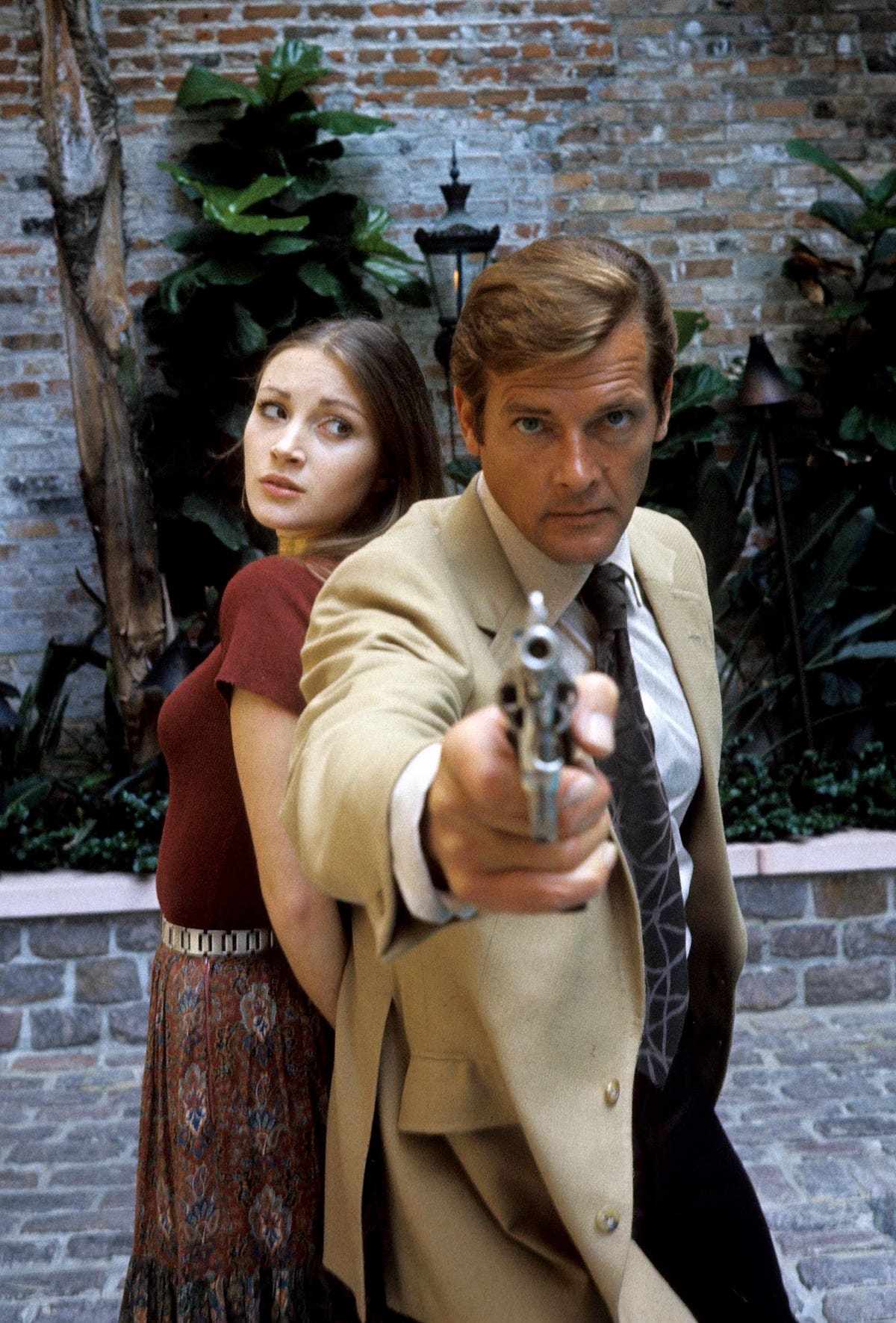 Ian Fleming followed up the success of his first James Bond novel, Casino Royale (1953), a year later with Live and Let Die. The movie version, which was Roger Moore’s first outing as 007, came out in 1973.

The novel’s plot involves Bond going after a Black-American criminal named “Mr. Big” (real name Bonaparte Ignace Gallia) who is also linked the USSR’s spy network SMERSH. Big is smuggling gold coins to finance Russian spy operations in the West, so Bond goes to New York and Harlem, where the coins have been showing up. He and CIA agent Felix Leiter are captured by Big, who employs a beautiful astrologist named Solitaire to determine if they are telling the truth. (Leiter later is thrown into a shark tank and loses an arm and a leg but survives.) Bond goes on to Jamaica and, while attaching a mine onto Big’s yacht with Solitaire onboard, is captured  again, where Solitaire and Bond are to be dragged over a coral reef, but the attached bomb explodes and saves them. Big is thrown in the water and killed by sharks and barracudas.

Live and Let Die is crammed with food and drink episodes: In chapter one Bond is staying at New York’s St. Regis hotel, where he has lunch with Leiter and an FBI man named Dexter, ordering room service for softshell crabs with tartare sauce, hamburgers, French fries, broccoli, a mixed salad with Thousand Island dressing and ice cream with melted butterscotch, accompanied by a bottle of Liebfraumilch “as good as you can get in America.”  The St. Regis was built by John Jacob Astor in 1904 (he co-owned the Waldorf-Astoria as well); one of its luxurious innovations was that each room had its own phone. It became famous in the Jazz Age as the location of the King Cole Bar.

Next day with a room service breakfast of scrambled eggs and double espresso a bomb arrives but is discovered, which does not keep 007 from a lunch on Lexington Avenue a diner named  Glorified Ham-N-Eggs. For dinner they first stop at Sugar Ray’s,  which really was owned by the boxer Sugar Ray Robinson, where they have a nip of Haig and Hair punch bottle Scotch, then on to dinner at Ma Frazier’s, which was at 2067 Seventh Avenue at 124thStreet, which Leiter says is the best restaurant in Harlem, where they eat Maryland chicken and littleneck clams. Afterwards they go off to the Savoy Ballroom (the “Home of Happy Feet”)for Scotch-and-soda and to watch the dancing couples. The Savoy was a very popular club of its day, featuring the big jazz bands of Duke Ellington and Cab Calloway. It closed in 1958. The two agents finish off the night, or early morning, with chicken sandwiches at a fictitious club called the Boneyard.

Bond bonds romantically with Solitaire and escape from Mr. Big, on the Silver Phantom (actually called the “Meteor”) pullman car, where Bond observes that its dining car service of camembert cheese is “one of the most welcome surprises on American menus.” The train ran between New York and Miami, as of 1939 as the first diesel-powered streamliner. Later it was sold to Amtrak.

At their hotel in St. Petersburg Bond orders a Haig & Haig and Leiter offers to take them to the Tampa restaurant Los Navidades, an old Spanish-Cuban food place that opened in 1890 at 1418 Seventh Avenue in Ybor City and was a hang-out for the Sanchez y Haya Cigar Factory workers. It closed in 1972.

At a small grill called Pete’s, Bond orders “the biggest steak, rare, with French fried he had ever seen,” with a pint of Old Grandad bourbon. In Jamaica he relishes the Caribbean food at MI6 agent Commander Strangeway’s home in the Blue Mountains: Paw paw with a slice of green lime, a dish pile with red bananas, purple star – apples and tangerines, scrambled eggs and bacon, blue Mountain coffee – the most delicious in the world – Jamaican marmalade, almost black, and guava jelly.”

Afterwards, preparing for a strenuous scuba-diving swim to Big’s island, Bond abstains from alcohol, and after the conclusion of a successful mission, he and Solitaire eat a big breakfast of “the first black crabs of the season,” roasted suckling pig, avocado salad and guava with coconut cream, with “the best champagne in Jamaica.”

In the film version of Live and Let Die Bond shows himself as a somewhat prissy connoisseur, entertaining—and baffling—his superior “M” with a huge and complicated La Pavoni Europicola espresso machine.  Otherwise there is not much food and drink in the movie. In  New York Bond take a cab to Harlem and stops at the Fillet of Soul restaurant where he asks for bourbon without water, only to be told that it will costs extra without water!

In Jamaica he checks into the San Monique hotel (the and now the Sans Souci Resort) and orders Bollinger in his room and yet again later in New Orleans at the Royal Orleans Hotel, beginning a long association with that Champagne in Bond films. There’s another Fillet of Soul restaurant there, where Bond orders a Sazerac. Aside from a few other drinks, the film is devoid of any more meals.