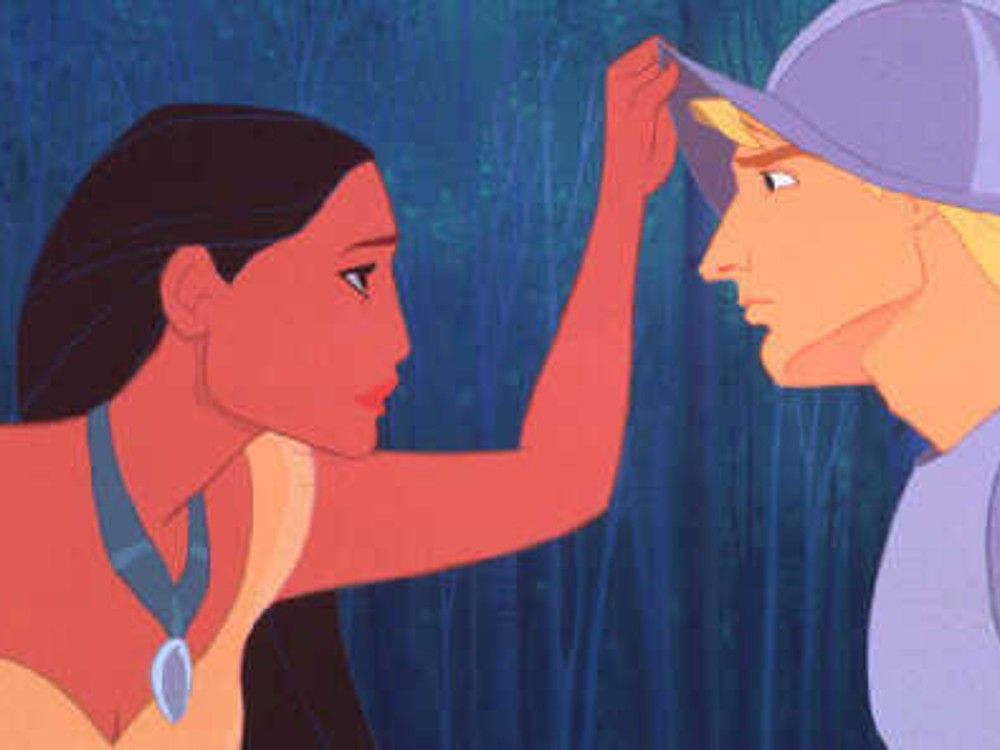 The story of Pocahontas was made popular by Disney in the 1995 eponymous animated film about an Indigenous girl and European colonist John Smith falling in love — but a new project is focusing on the truth behind the movie.

In an effort to raise awareness about Missing and Murdered Indigenous Women and Girls (MMIWG), a retelling of the story launched on Monday, ahead of National Indigenous Peoples Day in Canada. The project is called Missing Matoaka, which was Pocahontas’s given name. Viewers can press play on the original movie, mute the volume, and then listen to the audio provided online at MissingMatoaka.ca.

“Although it was an honour to write her story, it was also very challenging,” said Ojibwe writer Lauren DeLeary Frost, who worked on the script. “Some of the days I sat on the verge of tears writing her story of invasion, kidnap, rape and eventual murder.”

“By telling Matoaka’s story correctly, we’re really putting our foot down and saying, ‘No more. It won’t be brushed under the rug anymore and we will be heard,’” said DeLeary Frost.

The alternative audio offers historical insight, as well as voiceovers that give a more accurate depiction of what the characters might have said to one another.

In the Disney film, John Smith, a charming Londoner, arrives in what is now Virginia in the 17th century under the purview of Governor Ratcliffe. Smith meets the captivating Pocahontas, the daughter of Chief Powhatan, and they fall in love. After a member of the tribe is killed accidentally by Smith’s friend, Smith is captured and sentenced to death. Meanwhile, the colonists prepare for battle, having been warned of Smith’s sentence. But Pocahontas is able to save him from execution. He is injured in the aftermath when the governor refuses to back down, fuelled by his greed in a search for gold in the New World. The colonists end up detaining Ratcliffe in the end, as Pocahontas watches Smith sail back to England.

When they first meet, Smith tells Pocahontas about London. He describes it as a place with “streets filled with carriages, bridges over the rivers, and buildings as tall as trees.” Pocahontas replies she’d like to see those things. Smith says she will, because the colonists are “going to build them here” and will “show your people how to use this land properly, how to make the most of it.”

In the Missing Matoaka version, the dialogue between the two goes differently.

Matoaka: Is London the name of your land?
John Smith: Yes, it’s a big city.
Matoaka: Can you go back, please?
John Smith: No, I’m good. We have these things called streets and we abuse horses that carry us around. And our views of rivers are obstructed by the bridges we built.
Matoaka: So it’s nicer here?
John Smith: Not for long. We’re going to enslave your people, steal your food and land and then we’ll kill you with disease and guns.
Matoaka: That’s horrible!

The major themes in the Disney movie — romance and cultural tolerance — are in stark contrast to the actual events that took place when Europeans came to North America. The real-life Smith arrived in 1607.

At the time, he was around 27 years old, while Matoaka was a 10-year-old girl. Smith detailed his encounters in books and letters, which sparked the narrative that Matoaka saved him from her own tribe. She was the daughter of Chief Powhatan, but unlike in the Disney film, “Smith was feared by many Native people because he was known to enter villages and put guns to heads of chiefs demanding food and supplies,” according to Indian Country Today.

As a sign of peace, children would sometimes accompany the tribe when they discussed land or made trades with colonists, said DeLeary Frost, which is something Matoaka did.

She didn’t have a relationship with John Smith

In one scene in the retelling of the story, Matoaka narrates: “I wasn’t a wild cat prowling the woods in sexy outfits. I was surrounded by protection, closely watched and cared for by the community.”

Matoaka was later kidnapped when she was around 15 years old and taken aboard an English ship, Indigenous author and historian Dr. Linwood “Little Bear” Custalow wrote in The True Story of Pocahontas: The Other Side of History. She was raped, forced to convert to Christianity and to marry. She was eventually taken to England “to promote the goodwill of her people” and to camouflage the “brutal treatment of the Powhatan people,” wrote Custalow. A trip was planned for her return home, but she died before she could make the journey. It is believed she was poisoned.

Part of the importance of sharing Matoaka’s story is to get rid of stereotypes associated with Indigenous women, especially when they are hyper-sexualized, said Derek Blais, a member of the Oneida Nation of the Thames.

He is the senior vice president at BBDO Canada and acted as the creative director for the project, which was developed by a team of Indigenous creators.

“My mother was part of the 1960s Scoop and my grandmother is a residential school survivor,” he said. “I’ve always grown up knowing that the overall story of Pocahontas as written by John Smith, going back hundreds and hundreds of years — there’s always been something flawed with it.”

It was crucial for Blais to tell the story of Matoaka truthfully, he said, because she is the first documented missing and murdered Indigenous woman and the prior misconceptions contribute to the violence against them.

“We’re able to correct that and tell that from an Indigenous perspective. We think that will begin to help to educate people and look at their biases,” he said. “When it comes to truth and reconciliation, the truth has to come first. I want people to realize that they should be listening to Indigenous voices.”

DeLeary Frost said she felt a connection to Matoaka as an Indigenous woman.

When she was younger, she remembers being on a playdate with her best friend when he told her he “no longer liked Natives.” He said he wanted to be a cowboy and that she was “a savage” — a term used in the Pocahontas film, made popular by one of its hit songs.

“Throughout the process, I felt it all,” she said. “I felt hurt. I felt my story. I felt our story as Indigenous people. It was worth it. The truth is always worth it. I feel as if Matoaka can now rest in power, knowing her true legacy will be forever known.”

Editor’s note: A previous version stated that BBDO Canada was the agency behind the project. They were not.