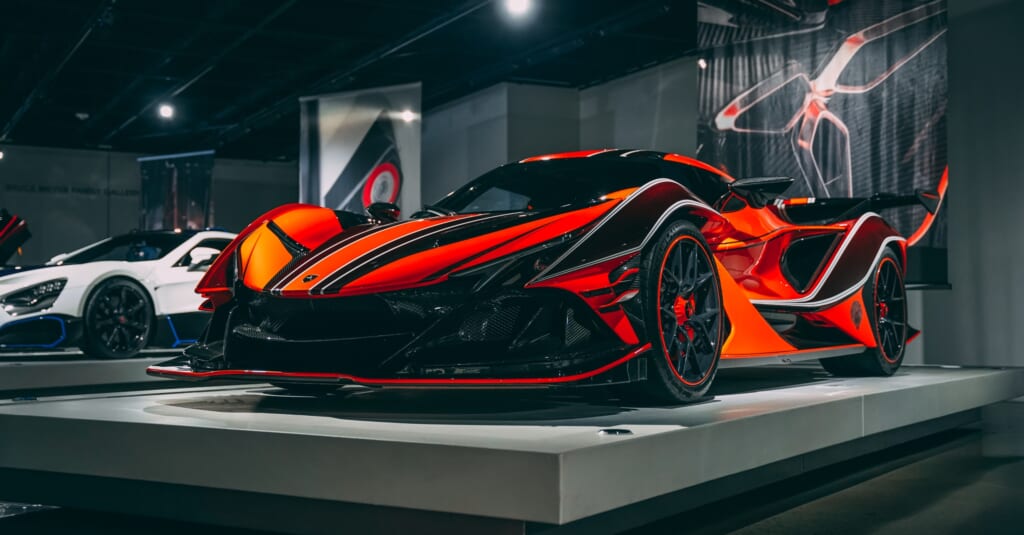 Astute Maxim readers will recognize a majority of the 14 new head-turning models that have joined the Hypercars: The Allure of the Extreme exhibit, which first opened in December 2021.

There’s the Bugatti Chiron Pur Sport, an even more elegant version of the Chiron Super Sport 300+ that entered production after becoming the first roadgoing ride to break the 300-mph barrier (production versions were limited to 273.4 mph.) The groundbreaking, hydrogen-electric Hyperion XP1 prototype appears with its intriguingly eccentric strakes.

Ferrari, which celebrated its 75th anniversary by giving Maxim an exclusive interview with Enzo Ferrari’s son, is repped by two exotic rides: the only publicly viewable example of the track-only FXX-K Evo and the immaculate Monza SP1 that science has deemed the world’s most beautiful car.

The rides named Gemera, Regera Gotham and One:1 of course come from Koenigsegg, the founder of which spoke to Maxim on the eve of the Gemera’s release. And those are just some of the many extremely covetable cars available for viewing.

“It’s rare to see any one of these elite vehicles in public, let alone an entire collection of them, and they each stand as a testament to what a hypercar truly is.”

Catch Hypercars: The Allure of the Extreme at the Petersen Automotive Museum now through May 14, 2023.