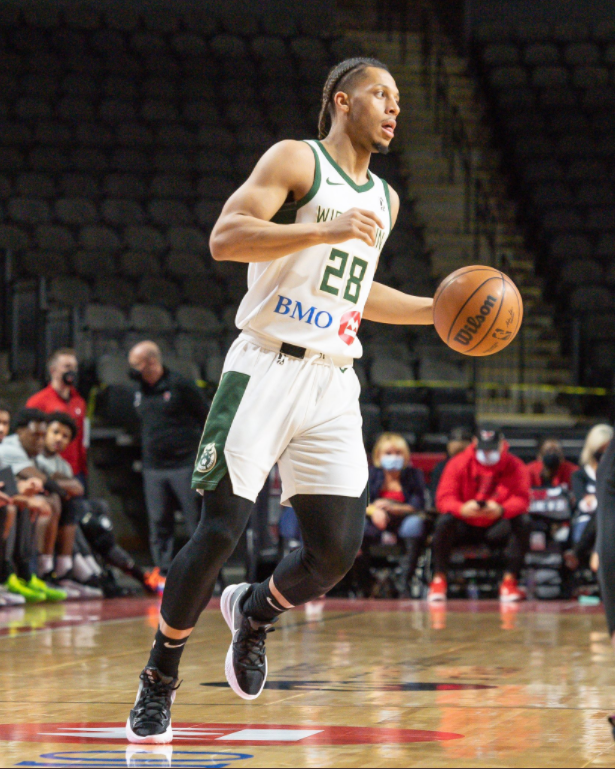 Canadian Lindell Wigginton made history when he signed a two-way contract with the Milwaukee Bucks on January 13, 2022.

Wigginton became the first Canadian who played in the Canadian Elite Basketball League (CEBL) to sign a standard contract in the NBA. His journey to his dream job wasn’t an easy one.

In 2019, he went undrafted in the NBA and would play in the G-League, CEBL and eventually, overseas. He worked on his craft, and three years after not hearing his name called, Wiggington signed with the reigning 2021 NBA Champions.

CityNews spoke with the 24-year-old about his unique journey to the league. In a turn of events, he says he has had multiple people approach him about a movie, book and even a documentary on his career.

(Note: This interview has been edited for length and clarity.)

CityNews: What have the last 11 days been like for you?

Man, it’s been a lot just travelling back and forth from the G-League to the NBA to when I first got signed. It’s been crazy and a lot of practice every day, so I haven’t got too much rest. But this is why I signed up for it. This is what I wanted.

CN: When you signed the two-way contract with the Milwaukee Bucks, you became the first player who played in the CEBL to sign a standard NBA contract after playing in the CEBL. Did anyone reach out to congratulate you? That was a bit of a surprise?

So the crazy thing is, the day I signed,  I played against the Golden State Warriors, and Reggie Miller was calling the broadcasting. So when I scored my first bucket, he said: “Welcome to the League” and stuff like that on TV. Then a couple of days later, we played in Atlanta against Trae Young and them. So I’m just doing my pregame routine and workout, and someone tapped me on the shoulder. I look back, and it’s Reggie Miller! It was crazy. So he then says to me, “Welcome to the league. How’d you like your shout-out?, Did your family like it?” And I’m like, Yes! That’s amazing that this that coming from like a legend. A Hall of Famer. It definitely blew my mind.

CN: You went undrafted in 2019, played in the G-League, CEBL, overseas, and finally have that NBA contract. Did you ever think it wasn’t going to happen?

I never really doubted because I knew I was a hard worker, and at some point, I knew the hard work would pay off. I also knew my skill set, I knew who I could play against, and I knew the stage I could be. I always had confidence.

Every time I stepped on the floor, no matter where I was, I knew I could dominate the current situation. And I didn’t try to think further.

CN: You grew up in North Preston and Union Square, Nova Scotia. How did growing up in that community impact where you are today?

It’s a tough place to grow up. There is a lot of violence and stuff like that. But I had good people around me that kept me on the right path and knew what I wanted in life. I always dreamed big, and when I want something, I’m going to go get it. And that’s kind of what I went out there and did. I didn’t let anything deteriorate my focus or anything like that. I had a great support system behind me, like my parents and my brothers, and the people in the community helped me stay focused, too, because they didn’t let me get sidetracked by any negative stuff.

CN: On Twitter, you have one of your tweets pinned that says, ‘Started out in public housing, look how far I came?’ What has that part of your journey been like to hear members of your community reach out to you?

It means just as much to me to hear from them as it means to them reaching out. It means so much to me to just be able to come from where I come from to do what I’m doing and to inspire the youth. That means the most to me.

I want to give back to my community and my province because growing up, I didn’t have that. I didn’t have a role model I could look up to and say, ‘Oh, he was an NBA  player, or she was doing this.’ It’s a blessing to be in a position where I am able to give back to the youth and also inspire them to know that they can get to this level if they work hard and believe in themselves.

CN: You mentioned how you knew you would take on court, and your skill level was there. Is there a player you’re looking forward to competing against if you already haven’t?

My first year, when I signed the Exhibit 10-day contract with the [Minnesota] Timberwolves, I wanted to see Steph Curry. I got to see him [before]. He scored like, 40 points three quarters in pre-season. Then my first game playing in the NBA with the Bucks, I got to see him again.

It’s also crazy that I’m seeing Giannis (Antetokounmpo) on TV and now he’s my teammate, it’s crazy. Obviously, it’s what you grew up dreaming about, but now I’m living it in reality.

CN: You mention Giannis. You also are playing for the Bucks’ G-League team. Is there anyone in the Bucks locker room that has been giving you advice?

I’ve been trying to speak to the older guys in my position that have been on the stage for a long time. Like Jrue Holiday, George Hill, guys like that. I’m just trying to pick their brains and trying to figure out what makes you stick in this league. It’s not even just on the court stuff; it’s off the court stuff, too. So, it’s just been a blessing to be able to learn from great veterans like them. You know that they are always looking out for your best interest.

Wigginton will play against fellow Canadian Kevin Pangos on Wednesday, who, after six years of bouncing around in Europe, also made an NBA roster, signing with the Cleveland Cavaliers.