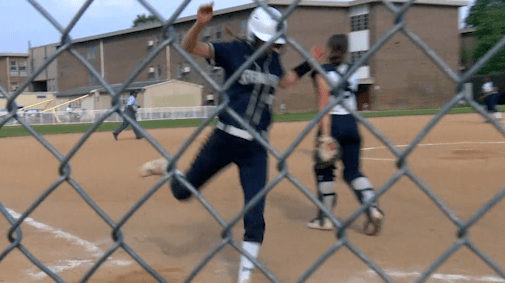 However, the sport and others offered to girls continue growing.

According to the Women’s Sports Foundation, more than 3.5 million girls currently compete in high school sports. That’s a far cry from the nearly 295,000 girls who played sports in 1972 when Title IX became law. That represents 3 million additional opportunities girls now have. But, there are still challenges.

Fans at Bowie High School have easy access to the field as there’s a lack of fence around it, especially in the outfield. However, there are also hazards out there if players are not careful.

“There are a couple of schools where we played in this softball season that the girls actually had to pick up rocks off the ground before they could play,” said Erica Edelen-Barnes, a parent from nearby Herbert Flowers High School.

That school has its own issues.

“We have batting cages right that aren’t working that look like they were falling over,” Edelen-Barnes said. “We’ve been trying to get some kind of assistance to fix them and no response.”

There are no problems with the field the Bowie Baseball Team uses. It’s kept in excellent condition. The situation is not exclusive to bowie.

The Parkdale High School Baseball team also has its own field.

The softball team hosts teams but on campus. Those games take place down the road at nearby Charles Carroll Middle School. It lacks fences, dugouts, and bleachers. Administrators from Parkdale and Bowie referred WDVM to the Prince George’s County School District as to what improvements could be made to the softball fields. No one responded to the requests to comment.

Just like college, Title IX covers all school districts. In addition, the law prohibits sex discrimination in any educational program or activity that receives federal money.

School districts must demonstrate they are doing their part to add opportunities for girls, whether athletically or academically, and improve the existing ones. There is, however, no time frame for when those improvements must be made. But school districts stand to lose federal money if they don’t at least try.

“I have kids, and I watch the opportunities they have, and they were not the kinds of opportunities I saw,” said Assistant U.S. Secretary of Education Catherine Lhamon.

Shed pointed out that opportunities for high school girls, whether in sports or the classroom, grew by 178% in the first year after Title IX became law in 1972.

Despite continued growth, there’s a lot of work to be done.

“Justice isn’t a destination that you reach and then you can turn away from it. We have to work for it every day,” Lhamon said. “Every year, there are new students in schools. So there’s new opportunities for discrimination and new opportunities to make Congress’ promise real for students.”

“Some people have different family situations, stuff like that,” said softball player Erin Barnes from Charles Herbert Flowers High School. “I feel like they need the support and the opportunity to get out there and move along and get a good education as well as have some playing time.”

Even if those opportunities take play on an unequal playing field.