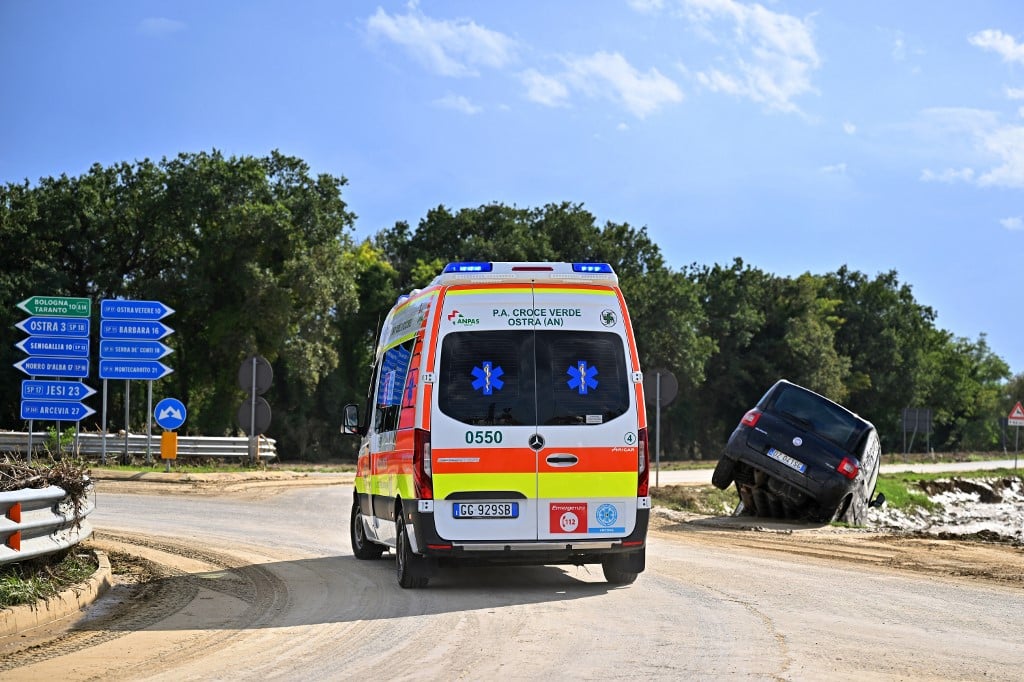 Desperate to see some firm commitments ahead of elections on September 25th, climate activists staged a sit-in at the Rome offices of frontrunner Giorgia Meloni earlier this month.

They demanded a public meeting with the far-right leader, but police removed them from the premises.

They say concern over the spiralling cost of living has drowned out the debate in Italy over how to tackle the devastation caused by global warming.

But after flash floods killed ten people and caused devastation across towns in central Italy this week, campaigners say this must change.

Outgoing Prime Minister Mario Draghi made an explicit link on Friday between the flooding and global warming, saying: “We see it concretely in what happened today how the fight against climate change is fundamental.”

Michele Giuli, a member of the Last Generation movement that stormed Meloni’s office, said the floods had to refocus thinking.

“People have died,” he told AFP. “This must make us reflect. What do we want to do with our lives, while the Italian state does nothing to reduce emissions and avoid tens of thousands of similar deaths in the next few years?”

Five times the number of storms, hurricanes and floods lashed the country this summer compared to a decade ago, according to agricultural association Coldiretti.

In August, Italian scientists wrote an open letter to politicians urging them to put the emergency first, and polls show the issue is one of the biggest concerns among Italy’s voters.

But an analysis published this week by Greenpeace found that less than 0.5 percent of political leaders’ statements on the main TV news programmes covered the climate crisis.

This summer in Italy “will be sadly remembered for the frequency and the violence of climate events… yet this dramatic emergency does not seem to affect many of the political leaders seeking to lead the country,” said Giuseppe Onufrio, executive director of Greenpeace Italy.

Some see things improving, however. Election experts at Luiss university in Rome note that some parties never used to mention the environment at all.

The widespread inclusion of green policies is actually “one of the novelties of this electoral campaign”, the CISE electoral studies unit said in a commentary last week.

This reflects the growing interest among the public, with 80 percent of respondents they surveyed agreeing that the fight against climate change should be a priority for Italy.

“At least climate change is addressed, or at least mentioned, in all of (the manifestos), though many are weak on detail,” said Piera Patrizio, senior researcher at the Centre for Environmental Policy at Imperial College London.

Italy had vowed to close its coal-fired plants by 2025, a goal it intends to keep despite the short-term measures to tackle the shortage of gas this winter.

Meloni’s right-wing alliance is pushing for nuclear energy, though Italians rejected it in two referenda in 1987 and 2011.

The coalition also pledges to invest in renewable energies and waste-to-energy plants, as well as domestic production of natural gas, and the installation of regasification plants.

The outgoing government plans to install two such plants off Tuscany and Emilia Romagna, despite local protests.

Enrico Letta’s centre-left Democratic Party (PD), which presents the main challenge to Meloni, backs the plants as a temporary fix.

The PD rejects nuclear power as too slow and expensive a solution and wants instead to sharply increase the share of renewables produced in Italy.

“There’s next to nothing (in the policies) on equity… on how some households, some parts of the country are going to be more affected than others,” Patrizio said.

The EU’s post-pandemic recovery fund, from which Italy expects to benefit almost €200 billion, is heavily tilted towards projects that ease the so-called “ecological transition”.

But Patrizio added: “Italy doesn’t have a net zero strategy right now… it doesn’t even know where to begin.”

Marzio Galeotti, environmental science and policy professor at Milan University, said it was “difficult to convince” the public that “environmental sustainability and emissions reduction can be combined with economic growth”.

But, he noted sadly, this is true of many countries: “We are seeing a kind of temporary amnesia that is not unique to Italy.”