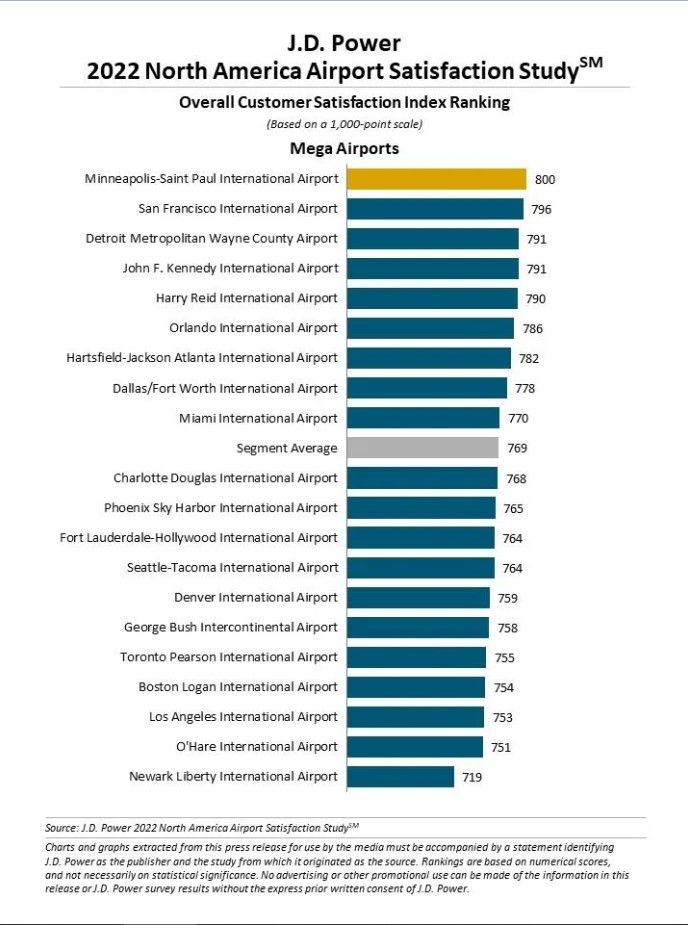 Toronto Pearson airport has had a rough go of late, ranging from lengthy delays to cancelled flights, and it doesn’t seem like the unfavourable impressions are going away anytime soon.

According to a survey by J.D. Power, among 20 “mega airports,” Pearson ranked fifth-last in overall traveller satisfaction with 755 points on a 1,000-point scale.

According to the survey, Minneapolis-Saint Paul International Airport ranks highest in passenger satisfaction among mega airports with a score of 800.

J.D. Power says the study revealed that airport crowds are back to pre-pandemic levels, with more than half (58 per cent) of travellers describing the airport terminal as severely or moderately crowded.

“Some big declines in traveller satisfaction this year are found in the parking lot, where a shortage of space has caused satisfaction with surface parking lots to decline 45 points from 2021,” the J.D. Power news release mentions.

According to data accumulated by FlightAware from May 26 and July 19, the study concluded that Pearson airport saw 52.5 per cent of its flights delayed — the only location with more than half of flights impacted.

In that same report, FlightAware revealed that the worst offender for cancelled flights is Shenzhen Bao’an International Airport in China, which has seen 7.9 per cent of all flights cancelled in recent weeks.

In August, the head of the Greater Toronto Airports Authority (GTAA) said the airport had been grappling with a staffing shortage affecting both carriers and federal agencies and that the situation continues to improve.

Post-pandemic issues caused widespread flight cancellations, baggage delays and lengthy lineups at major airports across the country, with Pearson the hardest hit by these problems.