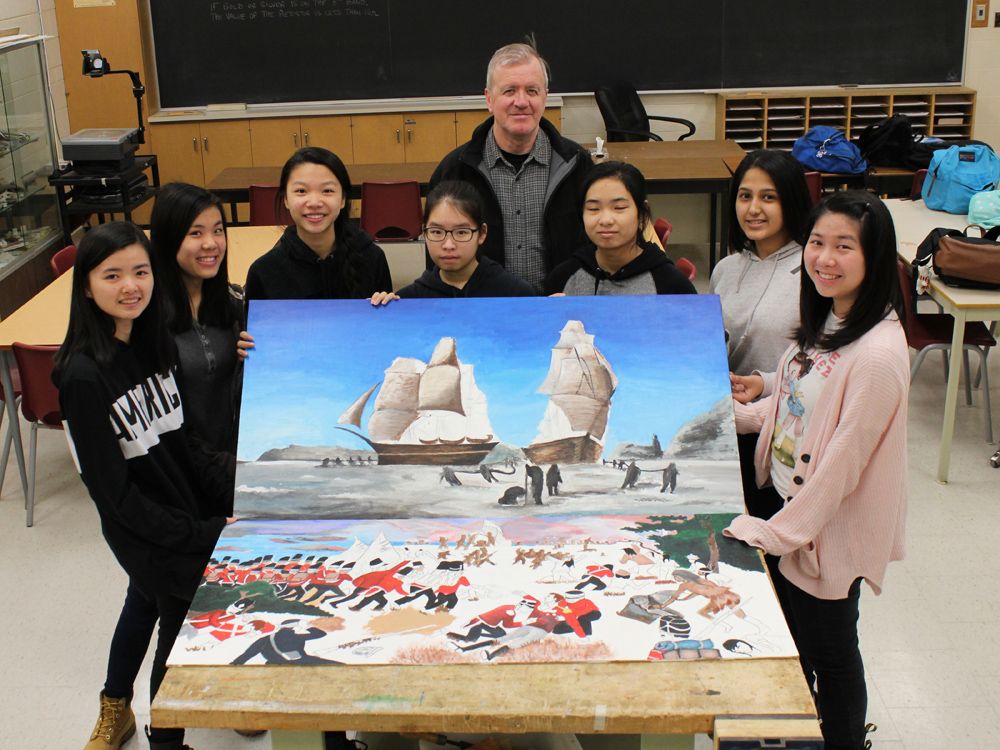 A teacher behind a series of historical murals at a Toronto high school is furious they’ve been taken down as the school board says they’re being evaluated for whether or not they honour truth and reconciliation.

Graham Bye, a former army reservist who has retired from teaching at the school, says he heard from a colleague that the murals had been removed from Albert Campbell Collegiate Institute in Scarborough.

“I instantly knew this would have something to do with social justice and equity and things like that,” said Bye. “Where are these school officials getting off and deciding what everybody else is able to see?”

“This mural thing is just a tiny example of the same kind of madness about pulling down statues and things like that.”

Bye said the program started in the early 2000s — he’s not precisely sure when — and had students paint murals of famous historical events. The school paid for art supplies, and the students were able to put their time spent painting towards community service hours the school required.

“We took very stringent measures to ensure that the content on the murals wasn’t offensive or anything like that,” said Bye.

Battle scenes, for example, have “no blood and guts,” Bye explained. Largely, the inspiration was a series of albums from around the time of Expo 67 depicting momentous occasions in Canadian history, though they used images from the internet, too, that could be projected onto a screen for students to refer to while they painted. There are, Bye recalled, perhaps around 15 murals that were painted over the years, showing scenes from early Indigenous history, the arrival of Europeans and the establishment of New France, and the industrialization of Canada.

A photo of one of the mural clubs on the school’s website shows a replica of the War of 1812 painting, The Battle of Queenston Heights, by painter John David Kelly. It was one of the most famous battles of the war; Gen. Isaac Brock was killed leading a cavalry charge there.

Another painting the students did that year shows the languishing Franklin expedition trying to pull HMS Erebus and Terror from the ice in the Victoria Strait. Famously, the members of that failed exploration of the Northwest Passage perished between 1845 and 1846.

But, at some point before the 2022 school year, the murals were all removed from where they had hung above lockers in a corridor in the history department of the high school. Bye isn’t sure what, exactly, was offensive about the murals, although one painting, which was described as being of the “discovery” of Canada by Europeans, may have led to the controversy.

Bye said they had tried to portray history accurately in the murals, even if it can be uncomfortable.

“The historical record is what it is,” he said

In an email, Ryan Bird, a spokesperson with the school board, confirmed the paintings had been removed for the time being, and said consultations are underway with staff and students about the paintings and reconciliation, given that it was “generally the depiction of Indigenous people in the paintings of historical scenes” that were cause for concern.

“They were taken down over the summer. My understanding is that staff wanted to have further discussions about them and took them down until those discussion could be had,” said Bird.

He said that all of the paintings were taken down, rather than just the ones depicting Indigenous people, because they all form “part of a larger mural.”

When COVID hit, the mural club was suspended, along with other school clubs, said Bye, making the mural produced in 2019 the final contribution to the display.

“They think they’re protecting people. Do you realize you’re behaving exactly like the communists or the Nazis you think you’re protecting us from?” said Bye.

Bye said that over the years he got “lots of compliments” about the murals and kids would show off the project to their parents when they visited the school.

“I think that’s what you were supposed to do as teacher, but apparently it’s triggering now. You know, it’s just ridiculous,” he said.

Tami Kelson, the principal at Albert Collegiate, did not respond to the National Post’s requests for comment. Nor did Yalini Rajakulasingam, the TDSB trustee for the ward in which the school is located.

Since he’s retired, Bye said he has nothing to fear, though he admits he would probably have spoken up even if he were still employed, as he said he did in seminars about diversity and inclusion.