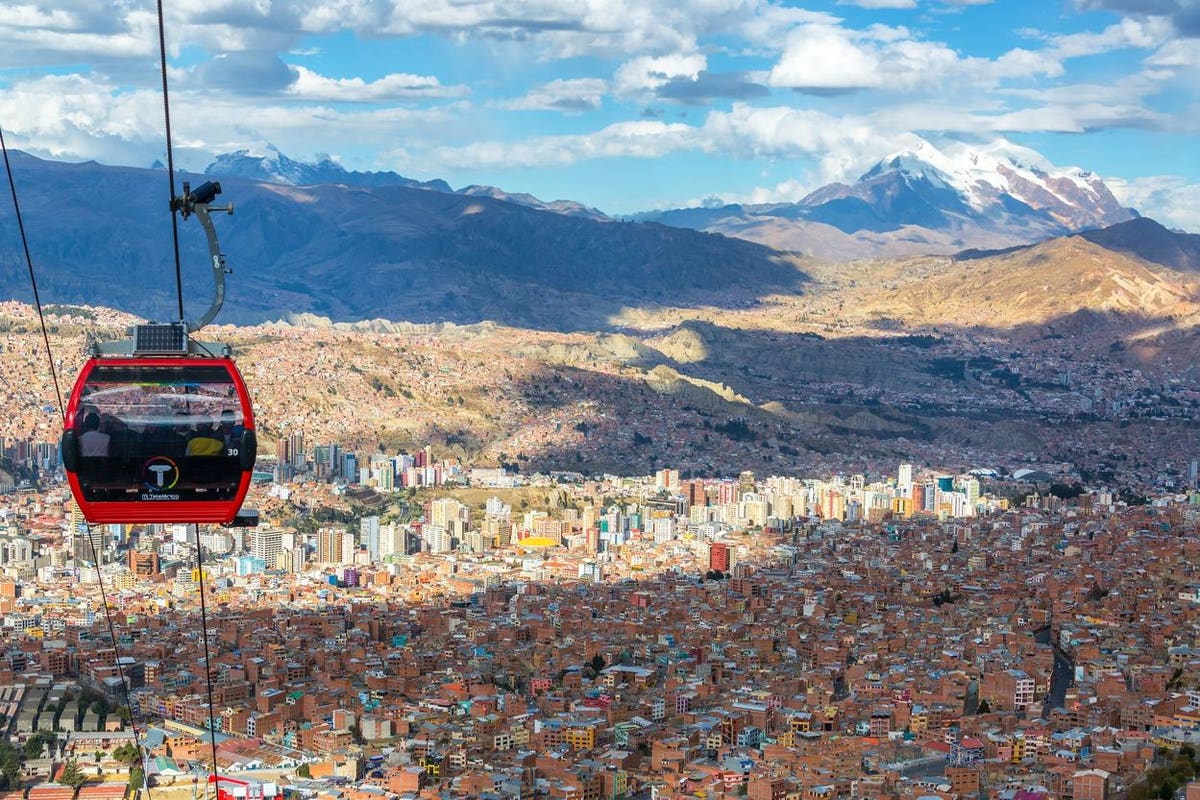 A brand new hotel is opening in La Paz, Bolivia, in January 2022. Not only does it feature the city’s first rooftop bar, you can admire the views of high-altitude La Paz from it while you sip singani from the world’s largest collection of this spirit that’s made only in Bolivia.

La Paz is known as the city that touches the clouds, thanks to its sky-high elevation of 11,975 feet above sea level. The city sits in a canyon in the Bolivian Andes with snow-capped Mount Illimani towering next to it at a height of over 21,000 feet.

A cable car system — Mi Teleférico — runs through most of the city. Unlike in most places, these gondola rides aren’t aimed at tourists. Mi Teleférico is a key public transportation system for the city known for its traffic jams. La Paz’s cable car makes it easy to get out and explore the city as you adjust to the high altitude before venturing further into Bolivia.

One Bolivian destination you won’t want to miss is ethereal Salar de Uyuni. It’s the world’s largest salt flats and, under the right conditions, it can look like you’re walking amongst the clouds. It’s just one of the many unique features that extreme altitude has provided to Bolivia.

MET Hotel is La Paz’s newest hotel. The design hotel is in the Calacoto neighborhood in the exclusive Zona Sur district, also home to bars, restaurants, boutiques and galleries. Zona Sur is at — comparatively — lower altitude than much of the rest of the city, which helps make its streets warmer and sleeping easier. It’s on the cable car’s green line.

The boutique MET Hotel was designed by Bolivian architect Ivan Valdez in partnership with Los Designers, the New York-based hospitality design firm. It has 76 rooms including the two-room MET Penthouse. Local artists are featured throughout the property, with art chosen by Mariano Ugalde of Salar Galería de Arte in central La Paz.

Guests of MET Hotel can take a breather from their high-altitude exertions in the spa, outdoor relaxation garden, indoor pool, hot tub and sauna, plus test if their lungs are up for a workout at almost 12,000 feet above sea level in the hotel’s 24-hour fitness center.

The hotel’s design hints at some of what you’ll see exploring further in Bolivia. For example, the walls of the modern lobby evoke the precisely cut stones found at the Tiwanaku ruins near Lake Titicaca. Tiwanaku, at its most populous height about 1,500 years ago, is thought to be one of the highest urban centers ever built on the planet. It’s at almost 13,000 feet above sea level. Like at the more well-known archeological sites in Peru — an ideal destination to add to your trip to Bolivia — you’ll marvel at the ancient engineering techniques that allowed for elaborate stone buildings to be created (and wish there was more than ruins remaining).

For dining at MET Hotel, you’ll be in the Dominga Restaurant. It offers contemporary cuisine highlighting Bolivia’s local ingredients and flavors. You’ll also be able to try Bolivian wines, which are only just becoming more available outside of Bolivia.

After winning its first gold medal in a blind wine tasting contest in 2013, Bolivia is becoming better known for its wine and the country is becoming a wine destination. The high altitude sunshine, thinner atmosphere, and cooler temperatures create a unique terroir, different from but rivaling those of the better known South American wine destinations of Argentina, Chile and Uruguay. Bolivia has three distinct wine regions, including a low altitude one in the Santa Cruz valley which is just on the edge of the Amazon rainforest.

Be sure not to miss sampling singani, Bolivia’s national liquor. MET Hotel has the world’s largest collection of it. Singani is a type of brandy — somewhat similar to pisco — made from white Muscat of Alexandria grapes grown and distilled only at high altitude in Bolivia. As The Washington Post describes, the sky-high heights bring out a thicker skin on the grapes and therefore more flavor and the lower distillation boiling point retains more aromatics.

At MET Hotel, with La Paz’s first rooftop bar, you can almost touch the clouds of this high altitude city. Sip your singani straight or crafted into a cocktail as you gaze out at La Paz’s views and celebrate Bolivia’s altitude and everything it brings.