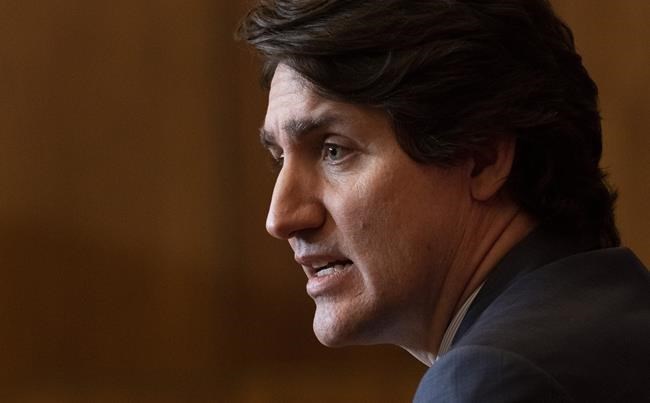 OTTAWA — Prime Minister Justin Trudeau says he’s concerned about the potential for violence during this weekend’s planned protest on Parliament Hill by truckers and others joining the crowd to vent their anger about public health restrictions to combat COVID-19.

“Of course I’m concerned,” Trudeau said in an interview Friday with The Canadian Press.

“A number of people are there without wanting to incite violence but there are going to be, as we’ve heard, a small group of people in there who are posing a threat to themselves, to each other, to Canadians.”

Ottawa police have warned of the potential for violence by extremists who’ve joined, or in some cases helped organize, the truck convoy that began converging on the country’s capital Friday.

The so-called “freedom convoy” has been billed as a protest against the federally imposed vaccine mandate on cross-border truckers, even though planning for the event began before the policy was established.

While key organizers have said violence won’t be tolerated, far-right extremists and white nationalists have latched onto it, with some calling for “bullets” or a “massive revolution” or a riot akin to the insurrectionists who stormed the U.S. Capitol a year ago.

“Canadians are not represented by this very troubling, small but very vocal minority of Canadians who are lashing out at science, at government, at society, at mandates and public health advice.”

A lot of the anger is directed personally at Trudeau, with many supporters of the convoy displaying signs and flags emblazoned with expletives against the prime minister. Some have called for Trudeau to be tried for treason to or to be beaten up.

“It doesn’t worry me that it’s personal. That’s sort of what you sign up for when you run for office, to a certain extent. You know there’s going to be lots of people who disagree with you and are going to express that disagreement … That comes with the territory,” he said.

“But threats of violence shouldn’t come with the territory for anyone who steps up to serve, whether it’s as a politician, as a local representative or even as a public health official or a doctor … That doesn’t have a place.”

The parliamentary precinct has been effectively shut down for the weekend. Members of Parliament, warned that some people are trying to extend the protest to their homes and constituency offices, have been given tips on how to stay safe.

Organizers have crafted a “memorandum of understanding” demanding that the appointed Senate and the Governor General effectively usurp the authority of the elected government and do away with all vaccine mandates and other public health restrictions — a constitutional impossibility.

Trudeau said it’s typical of “conspiracy theories” that spread “misinformation and disinformation” about the pandemic and how democratic governments work.

They do ” a very good job of seeming reasonable or sounding legitimate by using fake experts or pseudo-legalistic language … and unfortunately are just clever enough to bring in people who are otherwise reasonable to say, ‘Oh, that sounds really official,’ and they get roped in by terrible misinformation.”

He noted that the protesters use the appealing rallying cry of “freedom.”

“And the way to do that is to trust in science, to follow public health rules and to get vaccinated. That’s what standing up for rights and freedoms (looks like).”

Trudeau acknowledged everyone is frustrated with the pandemic, which has dragged on for almost two years, but most are “not taking to the streets with a level of vitriol that quite frankly doesn’t represent the vast, vast, vast number of Canadians out there who have demonstrated a sense of unity, of being there for each other that is remarkable and exemplary on the world stage.”

That’s why, he said, the country needs “reasonable, responsible leadership that is focused on keeping Canadians safe.”

He slammed Conservative Leader Erin O’Toole for “putting forward as his priority accommodating the unvaccinated.”

O’Toole, who intends to meet with some of the truckers, has called for calm and a peaceful protest. He has also denounced people involved in the convoy who are espousing racist and extremist ideas. But he has not called out any of his MPs, including deputy leader Candice Bergen, predecessor Andrew Scheer and finance critic Pierre Poilievre, who have given full-throated support to the convoy and joined in accusing Trudeau of being a threat to Canadians’ liberty.

“The fact that Mr. O’Toole is looking for political advantage … is really not the kind of responsible leadership that Canadians need,” Trudeau said.

This report by The Canadian Press was first published Jan. 28, 2022.