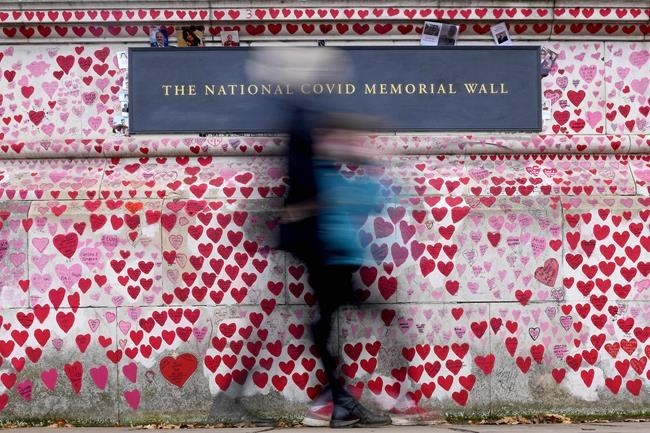 LONDON (AP) — Britain announced 1 billion pounds ($1.3 billion) in grants and other aid to help the hospitality industry survive the onslaught of the omicron variant of COVID-19, bowing to days of pressure from pubs, restaurants and other businesses that have seen their income plunge following public health warnings.

Businesses in the hospitality and leisure sectors in England will be eligible for one-time grants of up to 6,000 pounds ($7,954) each. An additional 100 million pounds ($133 million) will be given to local governments to support businesses in their areas hit by the sudden spike in COVID-19 infections driven by the highly transmissible new variant.

Pubs and restaurants have reported a wave of cancellations during the crucial Christmas season as people shun public events and workers are forced to self-isolate, leaving venues short of staff. Many theaters and museums also have closed their doors.

“With the surge in omicron cases, people are rightly exercising more caution as they go about their lives, which is impacting our hospitality, leisure and cultural sectors at what is typically the busiest time of the year,’’ Prime Minister Boris Johnson said in a statement. “That’s why we’re taking immediate action.”

The plunge in business came after England’s chief medical officer told the public to limit their social contacts and prioritize the events they most want to attend this holiday season. The message came as COVID-19 infections surged to the highest levels ever, raising concerns that hospitals and other emergency services may be overwhelmed.

Business groups including the British Chamber of Commerce, the Federation of Small Business and UKHospitality have demanded government help.

While the government’s scientific advisers have recommended further restrictions on businesses and social interactions, the government has been reluctant to order a lockdown in part because of the cost to the public purse.

Instead, Johnson is betting vaccines will be his savior, urging everyone to get booster shots to slow the spread of omicron.

While several organizations welcomed help, some big interest groups said so much damage had already been done that the support offered Tuesday was inadequate.

“The open/close strategy is crucifying businesses,” Michael Kill, chief executive of the Night Time Industries Association. “Every pound of help is much needed. But this package is far too little and borders on the insulting.”

Many governments in Europe and the U.S. are confronting similar dilemmas over how hard to come down in the face of omicron, which scientists say spreads more easily than other coronavirus strains, including delta, which itself led to surges in many parts of the world. Early evidence suggests omicron may also produce less serious illness — though experts caution it is too soon to say — and that it could better evade vaccine protection.

Even if it is milder, the new variant could still overwhelm health systems because of the sheer number of infections. Confirmed coronavirus cases in the U.K. have surged by 60% in a week as omicron overtook delta as the dominant variant.

Businesses argue that the uncertainty alone is wreaking havoc on their companies. Nathan Godley of restaurant supplier Premier Seafoods told the BBC that what he wanted was an idea on how to plan a week in advance.

“Fish doesn’t just go from the boat to the restaurant,” he said. “There’s quite a few of us in this supply chain in between, and we all need to know what is happening.”