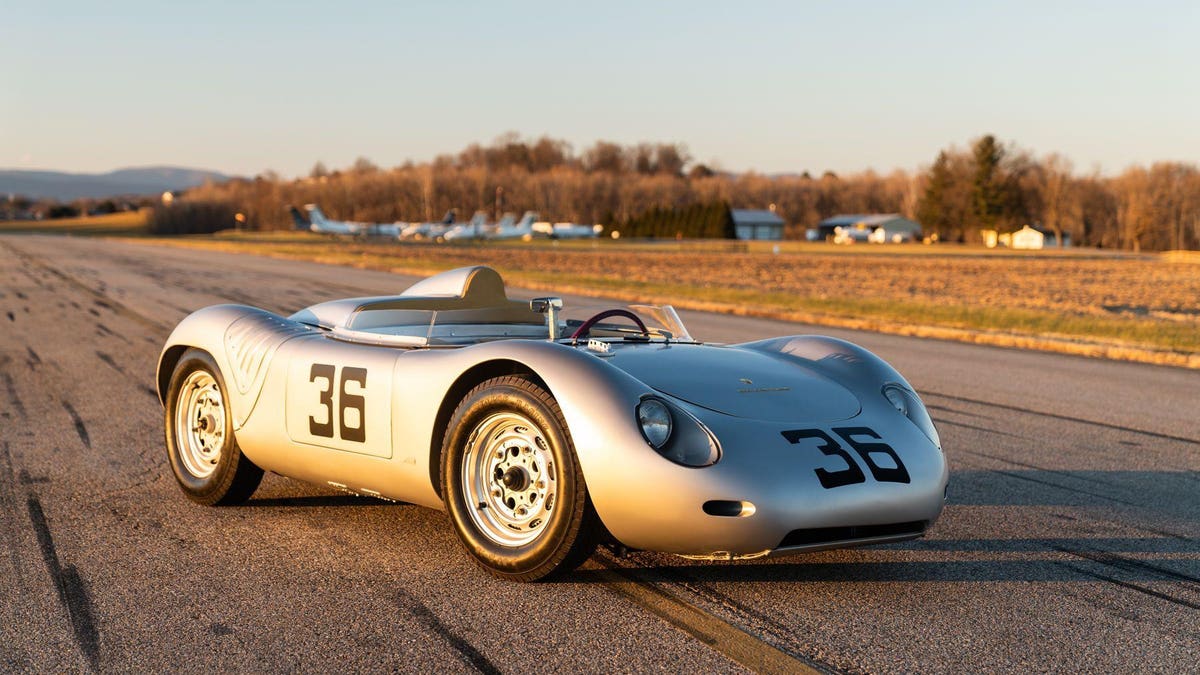 “This 1959 Porsche 718 RSK is a significant piece of Porsche history which remained hidden for the last half century,” says Gooding & Company Specialist, Angus Dykman. “Its current ownership of over 50 years is remarkable and surely must be one of the longest ownership periods for any Porsche Spyder.”

In 1957, Porsche introduced a new Spyder to replace its then-dominant race car, the 550A, seen here.

This newly introduced Spyder was named the 718 RSK, of which a total of 34 production cars were built. The RSK featured a much more aerodynamic body, revised chassis, among a host of other improvements.

In 1958, the RSK finished first in class and third overall at Le Mans and in 1959 won the Targa Florio outright. The vehicle has a notable provenance and a proven racing history – 1959 Porsche 718 RSK is chassis 718-018. It was purchased new by California privateer racer and Porsche-Volkswagen dealer Emil Pardee, seen here.

It was campaigned successfully by Pardee in various SCCA events, where the man proved to be as quick as his new car, winning his class in 10 races in Chassis 718-018 from 1959-1961. The 718 RSK eventually made its way to the East Coast in about 1970, when it was purchased by the consignor’s father. It has since remained under ownership of the same family.

The consignor’s father purchased the car from a physician in South Carolina in 1970. The car remained in static storage until 2014, when it was completely restored over the course of four years by Porsche 4-cam specialist Ray Morgan of Vintage Motorcar Restorations in Jasper, GA. The restoration in 2014 was meticulous and painstaking in its attention to detail, naturally, and the car was even painted in nitrocellulose lacquer as it was originally presented.

The paint was sourced directly from Germany, and antique spray guns were used for ultimate authenticity.

Since completing its restoration, chassis 718-018 has been shown at the Amelia Island Concours d’Elegance and displayed at the Porsche Experience Center in Atlanta, GA.

To have an RSK such as this example, which has remained in single family ownership for so long, makes it inarguably one of the most iconic and influential Porsches of all time.

About the annual Amelia Island Auction:

Gooding & Company’s annual Amelia Island Auction is one of the most highly anticipated events of the year for automotive enthusiasts. The venue, located at the classic beachfront Omni Amelia Island Plantation, caters to the enthusiast looking for a beautiful and inviting warm getaway.

Amelia Island and Porsche have become synonymous in recent years, largely due to Gooding & Company offering the greatest Porsches from the most prestigious collections, such as Selections from The Jerry Seinfeld Collection.