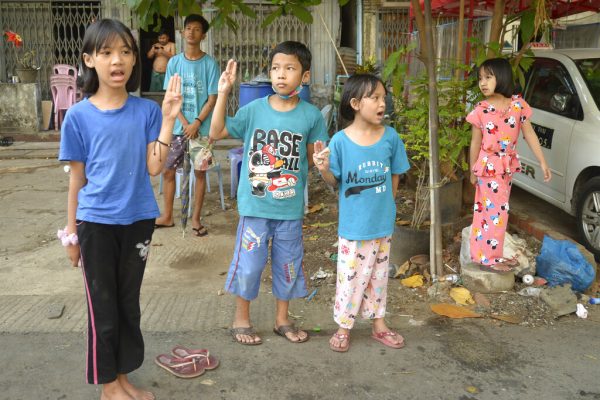 U.N. special rapporteur Tom Andrews has called on the world to respond to the country’s crisis with “the same urgency they have responded to the crisis in Ukraine.”

Children flash the three-fingered symbol of resistance as they join an anti-coup protest in Yangon, Myanmar, Saturday, April 10, 2021

Myanmar’s ongoing conflict could result in a “lost generation” of children, a United Nations expert said yesterday, in a report that lays out in horrific detail the systematic abuse of children since last February’s coup d’etat.

The report, which was authored by Tom Andrews, the U.N. special rapporteur on the situation of human rights in Myanmar, found that minors had been beaten and stabbed and had fingernails or teeth removed during interrogations, while some were made to endure mock executions.

“In Myanmar, the rights of children and families are under siege,” Andrews states in the introduction to the 40-page report, which was produced for submission to the U.N. Human Rights Council. “Children are not only caught in the crossfire of an illegal military junta’s war against the people of the nation, but they are also targets.”

Myanmar has been in turmoil since the coup, which prompted mass protests that were brought to a halt through the use of terror and lethal violence. This has only been redoubled since the emergence of dozens of civilian militia groups known as People’s Defense Forces, which have launched an armed uprising against the military government.

Andrews’ report opens with a deadening litany of statistics about the impact of this conflict on Myanmar’s young. Junta forces’ attacks on civilian populations have displaced more than 250,000 children, the report found, while at least 382 have been killed or maimed, including by air strikes and artillery barrages on civilian settlements.

More than 1,400 youths have been detained by the authorities, of whom at least 61 are currently in custody. The report says that 142 children are confirmed to have been tortured, including by some of the aforementioned means, since last February.

Due to the collapse of the public health system in the wake of the coup, some 33,000 children could die preventable deaths in 2022 alone due to disruptions to routine immunizations. Meanwhile 1.3 million children and more than 700,000 pregnant or breastfeeding women require nutritional support. Around 7.8 million children have had their schooling interrupted. The report notes that these figures may not represent the full extent of the suffering of Myanmar’s children and their families, given that the military administration has “severely disrupted” monitoring efforts.

“The relentless attacks on children underscore the depths of the military junta’s depravity and its willingness to inflict immense misery and hardship on innocent victims to try and subjugate the people of Myanmar,” the report states, adding that the junta’s attacks on children “constitute crimes against humanity and war crimes.”

The report adds to the thick catalogue of evidence about the extent of the terror that the Myanmar military is in the process of inflicting on the country’s population in a bid to consolidate its seizure of power. Urging the world to “respond to the crisis in Myanmar with the same urgency they have responded to the crisis in Ukraine,” Andrews called on the U.N.  to extend a “dramatic increase in humanitarian assistance and unequivocal regional support for refugees.” He also said that there was a need for “stronger and more unified targeted economic sanctions.”

Unfortunately, judging from the equivocal reaction of most nations in the face of the horrors that have already unfolded since the coup, especially those with the strongest strategic stakes in Myanmar, it is likely that self-interest will continue to prevail.