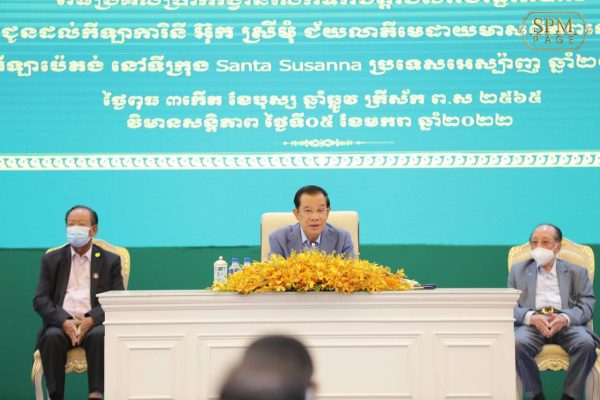 Tomorrow, Cambodia’s Prime Minister Hun Sen will embark on a two-day state visit to military-ruled Myanmar, aimed primarily at resolving the violent crisis stemming from last year’s coup d’état. The long-ruling leader is set to meet with Senior Gen. Min Aung Hlaing, who led last February’s coup, “to discuss and exchange views on bilateral and multilateral cooperation and the recent developments in ASEAN,” according to a statement from Cambodia’s Ministry of Foreign Affairs.

In a speech yesterday, Hun Sen that he had not set any preconditions for his visit, and defended his decision to engage directly with Myanmar’s coup leader, saying that his aims were in line with the Five-Point Consensus agreed by ASEAN at a special summit in April. He also said he was open to extending his trip by a day should it be necessary. “If the negotiations need more time to reach an agreement, I can fly back on January 9,” Hun Sen said.

Last month, Hun Sen made it clear that he would promote his own form of pragmatic engagement with the junta during Cambodia’s chairmanship of ASEAN this year, despite the bloc’s decision to exclude the military administration from its annual summit in October, due to the bloc’s growing frustration with the junta’s lack of cooperation in the implementation of the Five-Point Consensus. This called, among other things, for an end to violence, inclusive political dialogue, and the appointment of a special ASEAN envoy to Myanmar.

Despite taking a surprisingly hard line against the junta at the summit, the long-ruling Cambodian leader subsequently argued that junta officials should be invited to meetings of the Southeast Asian bloc. “It’s a family member of ASEAN, they must have the rights to attend meetings,” he said in a speech on December 6. “If I don’t work with the leadership,” he added, “whom can I work with?”

Hun Sen clearly fancies himself a peacemaker with the experience necessary to formulate a solution to Myanmar’s concatenation of economic, political, and humanitarian crises. He also may be hoping to burnish his reputation by undertaking bold diplomatic action aimed at brokering a peaceful resolution of some kind.

But his visit has been widely condemned on Myanmar social media, where users have posted photos of themselves trampling and setting on fire portraits of the Cambodian leader. Two bombs exploded near the Cambodian embassy in Naypyidaw on December 31 in an apparent warning to Hun Sen against his engagement with the junta.

In a joint statement issued earlier this week, nearly 200 local civil society groups said that Hun Sen’s visit could have the unintended effect of “lending legitimacy to the Myanmar military junta and further emboldening them to cause more harm to the people.” It added: “This would be an insult to the people of Myanmar and Cambodia and further jeopardizing ASEAN’s already-diminishing credibility during the Cambodia tenure as chair of ASEAN in 2022.”

Similarly, ASEAN Parliamentarians for Human Rights is running a social media campaign comparing Hun Sen’s “cowboy diplomacy” on Myanmar with the controversy that overshadowed Cambodia’s last chairmanship of ASEAN in 2012, when it moved to block a consensus statement that was mildly critical of China’s assertive actions in the South China Sea. As a result of Cambodia’s actions, ASEAN was unable to issue its customary joint communique for the first time in its history.

In particular, critics have expressed concerns that by offering engagement before the junta shows any progress on the Five-Point Consensus, Hun Sen is squandering what little leverage ASEAN has over the Myanmar military. It also requires Cambodia to work within the limitations imposed by the junta, which has shown little interest in implementing ASEAN’s peace plan. (Earlier this week, for instance, a junta spokesperson confirmed – unsurprisingly – that Hun Sen would not be permitted to meet with any detained pro-democracy leaders.)

This concern was voiced yesterday by Indonesian President Joko “Jokowi” Widodo in a call with Hun Sen. According to the Indonesian leader, he “reiterated clearly [the] Indonesia position on the importance of implementation of 5-Point Consensus to bring democracy back in Myanmar through inclusive dialogue.” Should there be no significant implementation of the consensus,” Jokowi added, his government’s position remained the same: that Myanmar’s military administration “should only be represented by non-political level at ASEAN meetings.”

Whether this was intended as pushback or affirmation is hard to say, however, and it may be too soon to say whether Cambodia really intends to scrap ASEAN’s approach to Myanmar and return to the drawing board. In yesterday’s speech, Hun Sen pledged not to go beyond ASEAN’s consensus on Myanmar and said that he would act within the parameters of the ASEAN Charter.

Understandably, many observers are loath to give the Cambodian leader any benefit of the doubt given the controversies of the country’s 2012 chairmanship and his recent multi-front offensives against opposition parties, civil society, and the independent press. But part of the difficulty also lies in the difficulty of drawing conclusions from Hun Sen’s idiosyncratic, extempore speeches, which it is risky to take as representing cohesive and binding policy commitments.

Aaron Connelly of Singapore’s International Institute for Strategic Studies wrote on Twitter yesterday that for all of Hun Sen’s flip-flopping, his government was sending signs that it would more likely than not continue the approach taken to Myanmar by last year’s ASEAN chair Brunei. To what end, however, remains hard to say. There are hard questions to be asked about whether this approach was working to begin with – and, indeed, whether Myanmar’s interlocking conflicts and crises are amenable, for the moment, to any form of outside intercession or mediation.