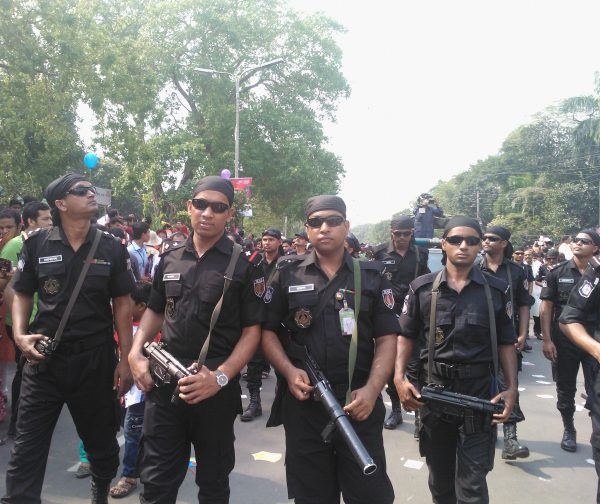 On December 10, the U.S. government imposed sanctions on six high-ranking officials of Bangladesh’s Rapid Action Battalion (RAB), including its current inspector general of police, for “serious human rights abuse” in Bangladesh. According to the U.S. Department of Treasury, which took the action under the Global Magnitsky Human Rights Accountability Act 2016, RAB and other Bangladeshi law enforcement organizations are responsible for more than 600 disappearances since 2009, nearly 600 extrajudicial killings since 2018, and torture. These incidents are reported to have also targeted opposition party members, journalists, and human rights activists.

Reports suggest that the RAB enjoyed initial popular support as it began to crack down on gangsters and thugs. In their distinctive black uniforms, black headscarves, and wraparound sunglasses, RAB personnel are as intimidating as they are clearly identifiable. Despite RAB’s tremendous success in countering violent extremism, terrorism, drug and human trafficking, and other crimes, it earned a bad reputation for violating human rights. This has been reflected in the U.S. Treasury Department’s report.

Under the recently announced sanctions, the named officials are prohibited from entering the U.S., their financial assets are blocked, and they cannot establish contact with any person or company in the U.S. A series of follow-up sanctions including withdrawing support for RAB, banning those individuals who worked for RAB from U.N. peacekeeping missions, and more international pressure on government from U.S. allies might come along if Bangladesh does not respond to Washington’s satisfaction.

The U.S. is one of Bangladesh’s main development partners. In fact, it was the single largest market for Bangladeshi goods in the world in 2018. Bangladesh is the largest recipient of U.S. assistance in Asia, after Afghanistan and Pakistan. Moreover, economic, security, and governance are major collaborating sectors between the U.S. and Bangladesh.

Bangladesh’s location in the Bay of Bengal gives it much geostrategic importance. According to noted geopolitical analyst Robert Kaplan, the Indian Ocean will be the center of global conflicts because it is through this ocean that much of the world’s business and trade is being conducted. Moreover, it is in the Indian Ocean that the interests and influence of India, China, and the United States are beginning to overlap and intersect. It is here, as Kaplan says, that the 21st century’s “global power dynamics will be revealed.” These realities came to the forefront when U.S. Navy Secretary Ray Mabus paid a quiet but significant visit to Dhaka in 2015.

So why is the U.S imposing sanctions on the RAB now? Why was Bangladesh not invited to the Biden administration’s recent Summit for Democracy, even though countries with lower democracy indexes were invited? Why does the U.S. want to pressure the Bangladesh government by pointing to human rights violations by its officials?

Geopolitical issues might be playing a role in the U.S. decision to impose sanctions on RAB. While the U.S.-led Quad – an informal strategic forum comprising the U.S., India, Australia, and Japan— is in place to check China’s influence in the Indo-Pacific region, Bangladesh has not yet confirmed its official allegiance to Quad due to its reliance on Chinese investment and supply of COVID-19 vaccines.

Deputy Secretary of State Stephen E. Biegun visited Bangladesh in October 2020 and formally invited Bangladesh to join the Quad. He said: “The U.S. sees Bangladesh as a key partner in the Indo-Pacific region … we are committed to growing our partnership in this regard to advance a free and open Indo-Pacific. Bangladesh will be the centerpiece of our work in the region.”

The Chinese Ambassador to Dhaka has categorically warned that “Bangladesh should not join the Quad, and that Bangladesh’s relations with China will “substantially be damaged” if it does so. Meanwhile, Russia also came out in support of Bangladesh when it was not invited to the Democracy Summit.

Meanwhile, mistrust has emerged between India and Bangladesh over Chinese funding for the construction of an airport terminal in Sylhet. Prime Minister Sheikh Hasina did not meet India’s High Commissioner Riva Ganguly Das despite the latter’s repeated requests for a meeting.

The situation is getting complex due to the active involvement of the U.S., India, China, and Russia in Bangladesh. Meanwhile some more mega-projects, including the Teesta River Project, are receiving funding from China.

The sanctions on the Bangladeshi officials were announced just days ahead of the visit of Indian President Ram Nath Kovind to Dhaka. India is a major proxy player of the U.S. in South Asia, in addition to being a member of the Quad coalition.

Other than summoning the U.S. ambassador in Dhaka for a meeting when allegations against the RAB officials were denied, the Hasina government has not responded to the sanctions.

Time will tell how these sanctions will shape Bangladesh’s relations with the U.S. and its geopolitical future. No doubt, Bangladesh is caught between a rock and a hard place. Its efforts to please all powers and to maintain good relations with all are becoming more difficult to sustain.