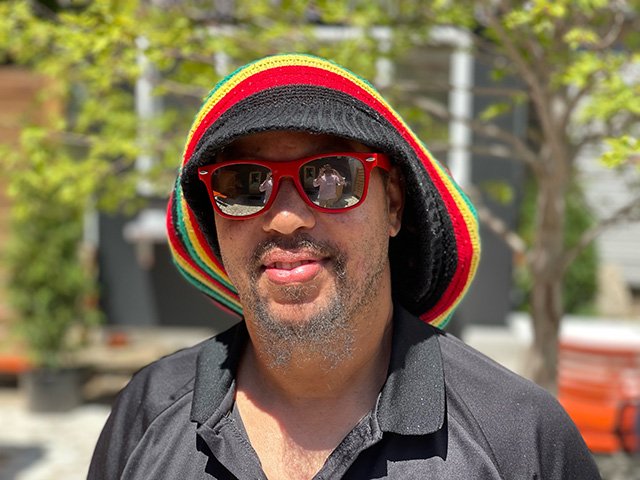 Joe Schoenherr is a born-and-raised Madisonian. He grew up on the near west side near Edgewood, and got his first job washing dishes at Pasqual’s on Monroe Street when he was a teenager. Outside of his service in the Marine Corps, and a stretch of landscaping work during the height of the COVID-19 pandemic, he has worked in kitchens his entire adult life. He is a classic journeyman cook, working in such restaurants as Cafe Costa Rica, Sujeo, Samba Brazilian Grill, The Bayou, Crescent City Grill and Jolly Bob’s — a job he “quit five times and got fired [from] twice.” He is affable and empathetic, and would be an excellent person to sit down for a beer with after a long shift. Currently, he works at Breese Stevens and The Sylvee cooking for their VIP & backstage hospitality programs, and he has a couple of shifts a week at Ahan on Winnebago Street. He talked with me on a break from prepping for a Forward Madison game.

What is a typical day like for you when you work a game at Breese Stevens?

I’ll get there at 9 or 10 in the morning. We’ll start bringing in all of our food that we prepped, and start bringing it to the outside kitchen, which is all the way across the field in the back. So if I forget anything, I have to go over 100 meters that way, and then 100 meters back. Every single time you forget something. I’ve done like 16-18 miles walking in a day. During the day, you can’t go on the field, because they have to groom it. And there are a limited number of carts. So basically, we’ll bring everything over on a cart until the beer guys have to use it.

Then you start heating up everything — we have warmers out there — and when that’s going on we’ll start setting up the areas, stocking napkins, making sure that you have enough for the whole game. Then you have the pregame— there’s like 350 in the pregame tent. While we’re getting that going, then we have to set up for our suites, our Forward Club and the premier suites.

It’s constantly a puzzle. I do round robins around the field all day, making sure that things are where they’re supposed to be, things taste right, that the warmers are working. If we’re gonna run out of something I run back to the main kitchen and make it real quick, or make something similar on the fly. Around five o’clock starts becoming crunch time. It’s just like the military, like triage going on.

How did you start working at Breese Stevens?

I started working with my buddy Tristan, who was the kitchen manager for the Mallards. I’d help him out doing that. He’d have events where he [would say] “I need eight cooks.” So then I’d go and find him eight cooks. Since I worked in enough restaurants, I’d go in the back of restaurants with a pen and paper and say “Hey, I need cooks on this date. As many as I can get. But it can’t interfere with any of your shifts here. No, I will not take you during your shifts. But I will pay you handsomely.” Once, at Epic, we did steak and lobster for 12,000 people. We had 40 6-foot coal burning grills in rows and we set it up like platoons.

What has kept you cooking for so long?

I like being active, and I’m good under pressure. I was in the Marine Corps and I was always in sports, like wrestling and soccer at high levels. I like pressure.

I also love food. I live through my stomach. I travel. I have been taking little vacations here and there. Just keeping a room here [in Madison] and going somewhere for a couple of months, or going to another country and trying food. I’m hopefully going to Singapore next year. My friend lives there. I’ve been to Singapore a number of times — the food scene is insane.

What lessons has your career in the kitchen taught you?

You gotta teach people up because they’re gonna be the next ones up, or you have to teach them to make your life easier. And don’t burn bridges. Because Madison is so small that if you burn a bridge that one can bite you in the ass.

I tell every young cook, act like every meal you’re cooking is for your mom. If you wouldn’t serve it to your loved ones, then don’t serve it to people who are spending their hard-earned money.