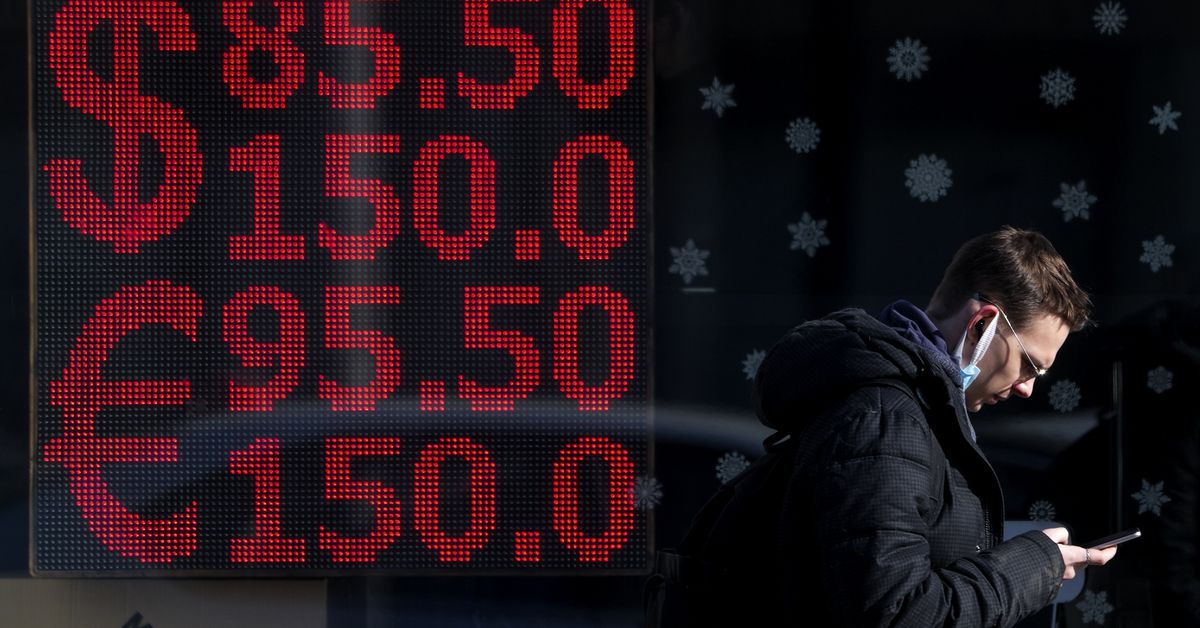 The United States and Europe have avoided direct military conflict with Russia amid its invasion of Ukraine. But they are using a powerful tool to try to push back against Russia and create consequences for its aggressions: an unexpectedly fast and powerful set of financial sanctions meant to shock the country’s economy and hamstring its access to financial resources.

While Russia may have anticipated the measures, what the country perhaps did not anticipate was for so much action to be taken so swiftly. The US and European allies have limited its ability to transact in foreign currencies such as dollars and euros, frozen the assets of multiple Russian banks, and cut off Russia’s banks from the SWIFT messaging system banks use to transmit information globally. Japan said it would join in freezing the assets of Russian leaders and some banks and freezing Russia’s foreign reserves in yen. Even Switzerland, a historically neutral country in conflict, has agreed to join sanctions efforts.

In turn, Russia has taken action to try to shore up its economy and finances. Its central bank has doubled its interest rate in an attempt to stabilize the ruble after the currency sank against the dollar. The country, which has been facing sanctions since its invasion of Crimea in 2014, has over $600 billion in foreign reserves, meaning money in other countries’ currencies and gold. It built up those reserves specifically to help fend off sanctions. As the New York Times notes, a lot of that money isn’t actually in Russia but is essentially on paper in banks around the world. So now, the country could have a hard time accessing that money. Sanctions are likely to hurt the Russian government; they are also hurting the Russian people, who were already in a tough spot before now.

These developments have major implications not only for Russia’s economy but potentially for the world’s; it’s unlikely their impact will be contained to one country’s borders. I spoke with Elina Ribakova, deputy chief economist at the International Institute of Finance, about the potential effects of these sanctions over the days, weeks, and months to come. Our conversation, lightly edited for length and clarity, is below.

Can you talk about the breadth of the international sanctions on Russia right now? How big of a deal is this?

This is a unique combination of measures that have been taken. Each individual measure is not unprecedented. What is historically unprecedented is the degree of multilateral coordination and the fact that they’re using these nuclear options at the same time.

It definitely will have a dramatic impact on the Russian economy, but at the same time, there’s room for further escalation.

What does this mean for Russia’s economy?

We are looking at a double-digit economic contraction already. We have seen extreme measures applied by the [Russian] government in terms of capital controls and blocking transfers of foreign currency to non-residents. Exporters have to convert 80 percent of their proceeds to the domestic market, and Russia’s central bank has more than doubled interest rates. Russia is also undertaking banking sector support, releasing some capital for the banks.

All these measures are just basic crisis management. But this crisis will grow larger for the Russian economy and common Russian people than whatever we can forecast or expect at the moment.

What’s going on with the ruble?

There’s definitely been movement on the ruble. Markets closed last week, and there have also been changes this week. The rate hike had an effect — the central bank more than doubled interest rates from 9.5 to 20 percent, and capital controls should also help.

Here, it is critical to see what individual and corporate depositors will do, whether they will accelerate dollarization of deposits, meaning they generate a big demand for dollars. If you have a 10 percentage point increase in the dollarization of domestic deposits — and we have seen that in the past, in the 2008 crisis — then you have pressure to have $100 billion on reserve, and they do not have that. In the extreme, if these rate hikes do not work, capital controls do not work, you could see the risk of foreign exchange deposits being frozen [by the Russian government].

So basically Russia is trying to get people to keep their money in rubles instead of putting it in dollars?

Right. For basic domestic Russian economic participants, what they’re trying to do is to prevent them from converting their rubles into dollars and to stop them from withdrawing cash from the banking system. For non-residents, they have effectively put up the Iron Curtain, you’re no longer able to pay as a resident in foreign currencies to a non-resident.

What does it mean for the people on the ground in Russia?

This is the worst economic crisis that many of them have seen. Those who remember the early ’90s, this is comparable to that.

It’s complete devastation for regular people in Russia because they’ve had years of austerity. The government has been trying to protect themselves with the Fortress Russia strategy [to bulk up its economy to protect itself from sanctions]. That requires not spending on infrastructure, social spending, and education, but instead accumulating all of its coffers to try to protect itself against sanctions. The person on the street has already been suffering and doesn’t have much in savings, if anything. But at the moment, they risk not even receiving their pension payments.

We’re not talking about the crisis in 2014 or 2008 or 1998, it’s closer to the early ’90s in the economy — losing savings, having capital controls, not being able to transact in foreign currencies, potential double-digit contraction in the economy, the inability, potentially, to get transfers for your salaries and pensions. Could we get to barter trading? That is also what happened in the ’90s. It was devastating for the Russian people.

Do you think the sanctions are more than the Russian government expected?

It’s very hard to speculate what the Russian authorities thought would happen. Given the current environment, I think it was to be expected that these nuclear measures would be put forward. Global authorities flagged that if there was an escalation in Ukraine, they were preparing factors that included extremely severe measures, and that’s what the authorities, multilaterally, are delivering.

What does all of this mean for the world economy? Will there be knock-on effects?

It will likely have knock-on effects via financial channels, trade channels, and pure contagion.

In trade, we are likely to see an effect on commodity prices, and we are already seeing that. Russia is an important exporter of oil and gas, various metals and mining commodities, and agricultural products. Ukraine is also a very important exporter of some metals and agricultural products. We’ll see the effects there, we’ll see the effects on global inflation, and then the question is how global central banks will react in each individual country’s conditions.

In the financial channel, Russia is not as significant as some other emerging markets in terms of foreign investor participation in the local market. So, I think it might not have massive direct effects. But Russian financial institutions, its central bank, they are important players in certain global markets. They have $640 billion in foreign exchange reserves, so they have positions still, or were hedging via financial instruments. So that’s something to watch for as the situation develops.

And then there’s pure contagion if there is a risk of high inflation and tightening of global financial conditions. There is definitely a high risk posed for global repercussions from this war.

Do corporations taking action make a difference? Like BP saying it will exit its stake in Rosneft, a Russian oil company?

I think it makes a difference in certain sectors of the Russian economy. You have seen foreign companies already being cautious about Russia even before sanctions because the rule of law concerns were already there starting from 2004 onward. Foreign investors were maybe interested in doing portfolio investments or some equity investments, but as far as serious commitments on the foreign direct investments front, at some point, people started being more careful. Then you had the 2008 crisis, and then after sanctions, even more so. The US imposed export controls and sanctions on new field developments in the energy sector. So this will have an impact, but it will not necessarily have an immediate impact on the economy, though it will have a long-lasting medium-term impact.

In the financial industry, foreign banks are not very large, but again, they could basically remove another layer of protection of individuals’ deposits there.

There’s room for escalation on sanctions, right? What does that look like?

Tightening existing sanctions, first and foremost. Going after the central bank’s ability to get foreign exchange, for example, or to transact in foreign exchange, that could be further curtailed. The same goes for banks; not all banks have lost access to US dollars, they haven’t yet lost access to euros. Not all banks have lost access to SWIFT [a messaging system banks used to transmit information such as payment confirmations and currency exchanges worldwide]. Even with the existing framework, there are ways to tighten the measures taken over the weekend.

There’s also energy and commodity prices, there’s a possibility of limiting those as well.

Is there coming back from this?

In the current set of sanctions packages, there is room for de-escalation should the authorities believe that it’s warranted. We now have different options on the table. Assessing those options is not my role as an economist. But there are options to scale up and scale down sanctions. Aso, we should not forget that economic sanctions are part of the broader economic statecraft, and that is part of the broader set of foreign policy tools, international relations, defense and military tools. This is just one of the tools being applied within the broader framework, but within that tool, there is room for escalation.

And in the meantime, this is hurting everyone in Russia, right? Or are the wealthy spared?

No matter how much money you have, you cannot transfer it abroad, you cannot get it out of your bank, and there’s nowhere to invest. But still, with any crisis, the common people feel it the most.