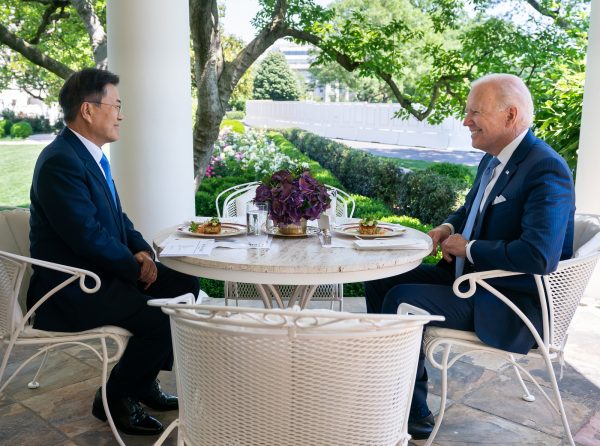 One of South Korea’s major strategic challenges today is maintaining a diplomatic balance between its two major foreign partners, the United States and China. While its alliance with the U.S. is vital to South Korea’s strategic security, China is South Korea’s largest trade partner. With the increase in geopolitical competition between the two global powers, the South Korean government has walked a tight rope, emphasizing the importance of the ROK-U.S. alliance and the pragmatic necessity of maintaining cooperative economic relations with China.

Despite the careful balancing act, South Korea could face pressure from either side. From the United States, South Korea could face pressure to participate in the U.S.-led Quad or to join international efforts condemning China’s domestic human rights records and military exercises against Taiwan. From China, South Korea has already faced warnings not to participate in the U.S.-led missile defense program or establish a trilateral security framework with the U.S. and Japan.

As South Korea navigates through China-U.S. strategic competition, Korean policymakers could apply lessons from India’s similar diplomatic balancing between the U.S. and Russia. India has, in recent years, expanded its security partnership with the United States to counter security challenges from China. India has joined the Quad, supported the U.S. policy of protecting a “free and open Indo-Pacific,” and has secured the U.S. designation of a “major defense partner,” which has allowed India to acquire cutting-edge U.S. military technology. However, India continues to maintain a strategic partnership with Russia, despite escalating Russia-U.S. tensions over Russia’s military buildup near the Russia-Ukraine border. On December 6, Russia’s President Vladimir Putin and India’s Prime Minister Narendra Modi held a summit in New Delhi, signing multiple trade and arms deals that extended the bilateral military-technological cooperation framework. This year, India also expects to receive the Russia-made S-400 air defense system under a deal signed in 2016.

India’s diplomatic balancing also faces pressure from both its partners. In 2017, the U.S. Congress passed the Countering America’s Adversaries Through Sanctions Act (CAATSA), which imposes sanctions on foreign entities that trade with Russia’s military sector. As a result, India’s continued arms trade with Russia could risk U.S. sanctions. India and other Quad member states could also receive a U.S. request to issue a joint public statement condemning Russia’s military activities on the Russia-Ukraine border. On the other side, Russia has expressed criticisms over India’s increasing security involvement with the United States in the Indo-Pacific.

Despite such pressures, India has successfully expanded its economic and security alignment with the U.S. while also maintaining its 50-year-old “special and privileged partnership” with Russia. The U.S. government is expected to grant India a waiver from CAATSA sanctions despite the continued India-Russia arms trade. Recently several U.S. senators introduced a new bill that would permanently exempt India and other Quad member states from the CAATSA sanctions. India has carved an “autonomous space” for cooperation with Russia in its strategic partnership with the U.S. by communicating two arguments.

Second, India has argued that its partnership with Russia could influence the latter’s strategic alignment with China. By playing on Russia’s interest in its major arms buyer, India could dissuade Russia from supporting China’s regional policy, which threatens India’s security, thereby driving a wedge between China and Russia. Through participating in multilateral forums backed by Russia, such as the Shanghai Cooperation Organization and BRICS, India could prevent China, another participant, from dominating these forums. And even if India fails to keep Russia strategically distant from China, some U.S. experts have acknowledged benefits in tolerating India’s independent foreign policy: “India’s relationship with Russia…serves as an example to other countries that want to promote shared interests with the US but that don’t want to appear to pick sides or join a treaty alliance.”

South Korea could apply similar arguments to diplomatically maneuver between the United States and China. While affirming the priority of the ROK-U.S. alliance, Korean policymakers could convince their American counterparts that carving out “autonomous space” for South Korea’s diplomacy toward China would ultimately benefit U.S. regional strategy. First, South Korea is still in the early stage of diversifying its trade networks away from the Chinese market. Premature disruption of bilateral trade would damage South Korea’s economy more than China’s and could cripple South Korea’s capacity to contribute to the regional and global order. Should the U.S. show patience toward South Korea’s gradual decoupling of its economic dependence from China, Seoul would become a more effective partner in the future for the U.S.

Second, South Korea’s partnership with China could mitigate the latter’s strategic alliance with North Korea. By influencing China to take a more nuanced approach toward security situations in the Korean Peninsula, Seoul could dissuade the former’s one-sided support for the DPRK regime. South Korean policymakers could convince the U.S. that South Korea is the most qualified actor to drive a wedge between China and North Korea. Therefore, it is in the U.S. strategic interest to grant its ally diplomatic independence in engaging with China.

From one perspective, South Korea might be perceived as an inconsistent ally that “cherry picks” areas of security cooperation. However, following India’s example, South Korea could communicate an alternative perspective that its selective independence in certain diplomatic areas would enhance ROK-U.S. cooperation in other policy areas, particularly over North Korea. Even more so than India, which is not a formal U.S. ally, South Korea could convince the United States to regard its East Asian ally not as a wavering link in the U.S. alliance network but as an asset – an “engagement card” the alliance can play in approaching China.

Skeptics might raise questions over how long India or South Korea could maintain a diplomatic balance between rival powers. Russia might eventually strategically align fully with China to counter the U.S., compelling India to take an unequivocal stance. As China’s regional neighbor, South Korea might eventually face a direct threat from China’s regional policy and be compelled to counteract. Even so, another lesson from India’s diplomacy with Russia is that, even if decoupling and realignment are inevitable, it need not be done prematurely or rashly. Seoul could convince the United States that a gradual process of economic realignment would help South Korea become a more effective ally in responding to regional challenges, including China. And the .U.S could nurture this transition through patience and facilitating economic and strategic alternatives for its ally.