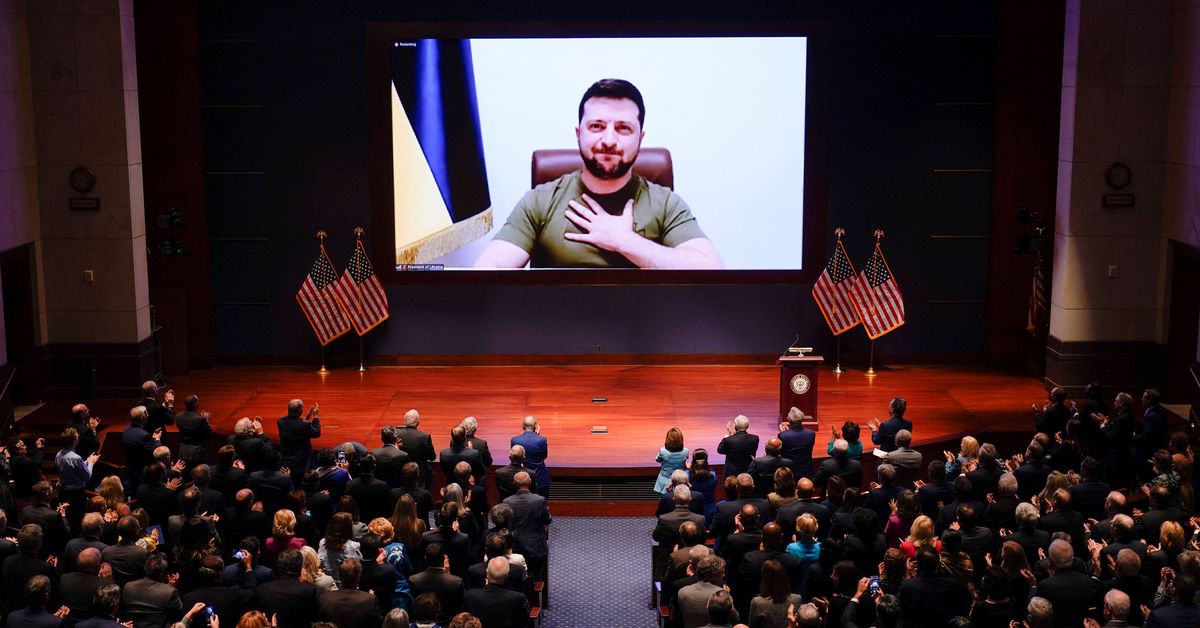 Ukrainian President Volodymyr Zelenskyy’s speech to Congress on Wednesday morning was, in the main, an incredibly moving appeal to stop the killing of Ukrainians by the Russian military. But it was also an argument to Congress and President Joe Biden that doing more to help the Ukrainian war effort was in America’s interests, too.

“Today the Ukrainian people are defending not only Ukraine. We are fighting for the values of Europe and the world,” Zelenskyy said. “Peace in your country doesn’t depend anymore only on you and your people. It depends on those next to you, on those who are strong.”

There is a sense in which this appeal rings true: It is strongly in America’s interest for Putin to lose the war and be deterred from future military adventurism on the European continent. But there is another sense in which it isn’t quite right, especially when Zelenskyy ties his argument to a specific ask: that the US and its allies impose a no-fly zone over Ukraine.

Some commentators have proposed such a policy as a tool for alleviating suffering, to carve out areas in Ukraine where civilians and humanitarian aid can move safely. But let’s be clear on what that really means: A no-fly zone is a commitment to use force to shoot down military aircraft over Ukrainian skies. It would, with near certainty, lead to direct combat between American and Russian forces. Once that happens, the risk of an apocalyptic nuclear war becomes disturbingly high.

For Zelenskyy, taking on that nuclear risk makes sense because his country is already at existential risk: Putin’s invasion is intended to bring about the end of Ukraine as an independent country, and there is no more pressing crisis for Ukraine than the shelling and targeting of its cities and civilians.

But for America, the risk calculus is a little different — as the Biden administration’s actions so far suggest. As much as America wants Ukraine to win the war, the conflict does not at present imperil the American homeland. A war with Russia threatens not only the United States but the entire world, which is why the Biden administration has repeatedly and adamantly ruled out any kind of direct US intervention — a no-fly zone included.

So far, only a handful of legislators have supported a no-fly zone, with domestic pressure for the policy mostly coming from hawkish think tankers and cable news commentators. The question now is whether Zelenskyy’s speech moves the political needle — and what the implications of that shift might be if it happens.

Where American and Ukrainian interests diverge

The concept of a “national interest” is, as a philosophical matter, much more complicated than most people think. Some foreign policy decisions — like, say, trade agreements — help some citizens and hurt others, making it quite tricky to pinpoint whether signing the agreement is in the “national interest” as a whole.

But if anything is unquestionably in the national interest, it is national survival. A country cannot do anything if it ceases to exist — and nothing less is at stake in the war in Ukraine.

In his speech announcing the invasion, Vladimir Putin all but openly declared his intent to topple the Ukrainian government and replace it with a Russian puppet regime. Ukrainian resistance has been so fiercely effective, in part, because they are fighting for national survival.

From the Ukrainian point of view, it’s easy to see how hypothetical fears of a broader US-Russia war would feel like a secondary concern. Russian forces are slaughtering Ukrainian civilians with artillery right now. They are besieging Mariupol right now. They are attempting to encircle Kyiv right now. For Ukrainians, it makes all the sense in the world to demand as much as they can from the West.

“Nobody knows whether it [World War III] may have already started,” Zelenskyy reportedly told NBC’s Lester Holt in an interview airing Wednesday evening. “And what is the possibility of this war if … Ukraine will fall? It’s very hard to say.”

But American policymakers are also concerned with their national survival. Typically, such fears don’t play a major role in everyday foreign policy: With the world’s strongest military and generally friendly neighbors, America’s homeland is one of the safest of any on the planet.

Weapons of mass destruction — mostly nuclear, though also potentially biological agents — are pretty much the only methods of attack a foreign power could employ with a chance to do massive damage to the American homeland. A shooting war between Russia and America, which together possess roughly 90 percent of the world’s nuclear arsenal, threatens not only both countries but the planet itself.

Given the apocalyptic stakes, the Biden administration has — quite rightly, in my view — decided that the (oft-overstated) benefits of a no-fly zone in Ukraine simply aren’t worth it compared to the absolutely enormous risks.

“We will not fight a war against Russia in Ukraine,” the president said on Friday. “Direct conflict between NATO and Russia is World War III, something we must strive to prevent.”

Where do US and Ukrainian interests converge?

Zelenskyy’s speech seems calculated to put political pressure on Biden to shift his stance, to get Congress and the American public to demand more from the US government.

There’s some reason to think this might happen, partly due to partisan incentives of Republicans to paint Biden as weak. After Zelenskyy’s address, Senate Minority Leader Mitch McConnell told CNN that it was an “incredibly effective speech,“ adding that “the message to President Biden is that he needs to step up his game.”

But step up how, exactly?

Virtually everyone in the Biden administration has been crystal clear that it views any kind of direct intervention as a nonstarter due to the risks, and it’s hard to see political pressure from Congress changing that particularly weighty calculation. The US has already taken tremendous steps, including sweeping economic sanctions that are likely also hurting America’s economy, in the name of punishing Russian aggression. So what more could the US do that doesn’t exceed the administration’s tolerance for risk?

Zelenskyy’s speech suggests several specific answers, including new sanctions targeting every member of the State Duma (the lower house of Russia’s legislature). In the speech’s savviest section, he positions the US provision of air defense systems — specifically, fighter jets and the S-300 surface-to-air missile launcher — as a direct alternative to a no-fly zone:

You know what kind of defense systems we need, S-300 and similar other systems. You know how much depends on the battlefield, the ability to use aircraft. Powerful, strong aviation to protect our people, our freedom, our land. Aircraft that can help Ukraine, help Europe. You know that they exist, and you have them. But they are on Earth, not in Ukrainian sky.

Here he is obliquely referencing the recent mess surrounding the transfer of Polish MiG-29 fighters via a US airbase in Germany, which Washington vetoed on grounds that it would be seen as dangerously provocative in Moscow (though Poland could still offer the MiGs unilaterally). Zelenskyy’s argument appears to be: If you won’t help us protect our skies directly, why not do so indirectly?

Here there seems to be more room for compromise.

Again, US and Ukrainian interests really do converge on the question of defeating Putin’s invasion — the Ukrainians want to protect their land, and America wants to make sure Putin never tries something similar against a NATO state. And both states agree (at least in theory) that there’s a moral obligation to protect civilians and states from unjust military aggression.

What’s more, there’s a very long history of great powers arming each other’s enemies without it escalating to direct warfare — see Soviet support for the North Vietnamese or American support for the Afghan mujahideen. The US and its NATO allies are already providing the Ukrainians with tremendous amounts of military aid, including Stinger anti-aircraft missiles. It’s possible that Putin would see fighter jets or S-300s as a major escalation, but that’s not necessarily obvious.

If there is some kind of escalated US military commitment to Ukraine’s air defense, I would expect it there: through military assistance rather than US Air Force sorties. As powerful as Zelenskyy’s appeal to Congress was, America’s interest in staying out of the war has proven stronger to date.