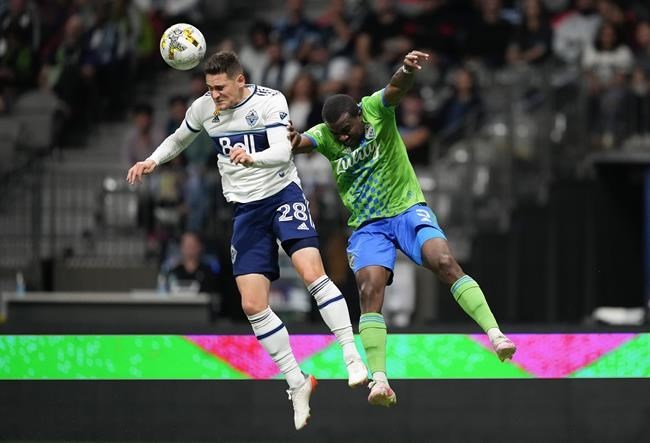 VANCOUVER — The Vancouver Whitecaps once again kept their playoff hopes alive Saturday with a 2-1 win over the Seattle Sounders.

Pedro Vite opened the scoring in the 29th minute and Julian Gressel doubled Vancouver’s lead eight minutes later as the Whitecaps (11-14-7) beat their regional rivals for the first time in more than five years.

Goalkeeper Thomas Hasal stopped two on-target shots to collect his fourth win of the season for Vancouver and Stefan Frei made three saves for Seattle.

The result vaulted the Whitecaps over the Sounders (12-16-3) to ninth spot in Major League Soccer’s Western Conference.

Vancouver still sits two places and three points below the playoff bar with two games remaining in the regular season. Seattle is four points and three spots out of a post-season berth.

The ‘Caps were coming off a 3-0 victory over the L.A. Galaxy on Wednesday while the Sounders had not played since beating Austin FC on Sept. 10.

The impact of the packed schedule showed at times in the second half, with Seattle pressing hard and Vancouver’s players occasionally looking gassed.

Former Whitecap Fredy Montero set up Seattle’s lone goal of the night in the 89th minute, sending a ball into the penalty area where it glanced off Bruin’s head and into the net.

Bruin came off the bench in the 72nd minute, replacing Josh Atencio.

The Whitecaps briefly appeared to go up 3-0 midway through the second half when Luis Martins put a ball on the foot of a sliding Brian White.

The Vancouver striker looked to slide a shot into the net in the 61st minute but Frei scooped the ball back up before it fully crossed the line and play continued as boos rained down from the crowd. The video-assisted referee checked the sequence and the no-goal call was upheld.

Seattle controlled 66 per cent of the possession through the first half but it was Vancouver who led 2-0 on the scoreboard heading into the locker room.

The Sounders’ first on-target shot of the game came in the 48th minute when Montero took a right-foot attempt from outside the box, forcing Hasal to make a diving save.

Gressel doubled the home side’s advantage 37 minutes in with a stunning strike.

Martins threw the ball in from the sidelines, finding Ranko Veselinovic for a header in traffic, and the ball bounced out to Gressel at the top of the penalty area. The German blasted a right-footed shot through Frei’s hand to give Vancouver a 2-0 lead.

It was his second goal of the season.

Eight minutes earlier, Ryan Gauld snuck around his defender and delivered a pass to Vite, who tapped the ball in from the top of the six-yard box for his second goal in as many games.

Heading into Saturday’s game, Vancouver had not beat Seattle since April 14, 2017, with Seattle going 10-0-5 across the stretch.

The Whitecaps are now off for the international break and will return Oct. 1 when they host Austin FC in their final home game of the season. The Sounders take on FC Cincinnati in Seattle on Sept. 27.

FOOT NOTES: Whitecaps midfielder Andreas Cubas left the game with an adductor injury in the 33rd minute. … Seattle’s Alex Roldan was shown the yellow card in the 25th minute for grabbing Gauld’s jersey. Sounders captain Nicolas Lodeiro was cautioned in the 81st minute after taking down Gressel along the sideline. Gressel got a yellow a minute later for another confrontation with Lodeiro. … A crowd of 19,722 took in the game at B.C. Place, marking the club’s largest attendance of the MLS season.

This report by The Canadian Press was first published Sept. 17, 2022.