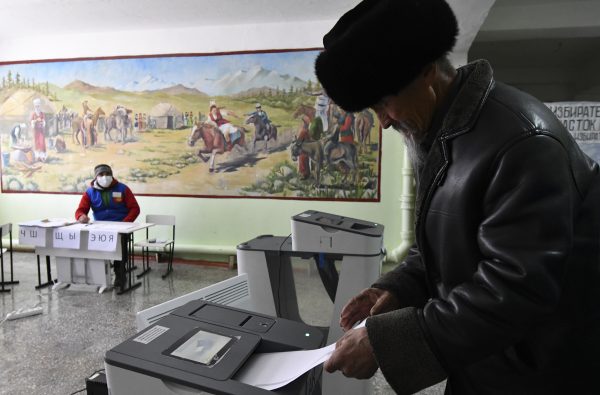 On Sunday, November 28, Kyrgyz citizens will once again be summoned to the ballot box to cast votes, closing out an exhausting year of electoral exercises: a presidential election and referendum held in tandem in January, a referendum and a wave of local elections held together in April, and now at last a parliamentary election. More than a year after Kyrgyzstan’s previous attempt to elect a new parliament ended disastrously, in protests and a change of regime, Kyrgyz voters will try again under a new constitution and a new electoral system, and voters will consider a bevy of new parties.

The Diplomat spoke with Dr. Asel Doolotkeldieva, a senior lecturer at the OSCE Academy in Bishkek, about what’s new, why this election is significant, and what challenges Kyrgyzstan’s faces — after elections, after all, comes governing.

Kyrgyzstan’s parliamentary election is fast approaching. Why is this election significant?

The upcoming parliamentary election in Kyrgyzstan is significant in several ways. Just a year ago, in October 2020, this Central Asian country experienced a third violent change of government in its short history of independence. The government overthrow followed what was perceived popularly as a regime manipulation of parliamentary elections amidst COVID-induced economic crisis. Since the new President Sadyr Japarov capitalized on popular anger at the fraudulent elections, his long-term legitimacy will depend on whether he can deliver on his promise to conduct open and honest elections at the end of November 2021. It’s even possible fraud will not be contested this time because of people’s fatigue with politics, but failure will impact on Japarov’s legitimacy in the upcoming years. Kyrgyzstan is, perhaps, the only state in Central Asia, where legitimacy matters in terms of real outcomes such as popular uprisings against the leaders.

The election is also salient with respect to the future composition of elites, the government-elite relationship, and the scope of presidential power. Recent constitutional changes away from the proportional system toward a mixed system were designed to further weaken the parliament and political parties. These changes, and the most likely victory of two “pro-presidential” political parties, Ata Jurt Kyrgyzstan [Homeland Kyrgyzstan] and Ishenim [Faith], will contribute to Japarov’s gradual consolidation of power since his power grab last year. Although the two parties are not officially connected to the president, they serve informally as hosting platforms for the president’s Mekenchil party members. This way, the presidential party can participate in the elections without running as a formally registered organization. This tactic helps the authorities conceal their involvement in the election.

Third, this election will mark a regress from the semi-parliamentary experiment, which was initiated in the aftermath of April Revolution of 2010. Proponents of the presidential system would say that the semi-parliamentary system did not live up to expectations. The problem is that the semi-parliamentary system did not lead to the formation of real political parties and programmatic visions. Local critics are concerned that the mixed system will even further weaken the emergent party system because single mandate candidates will reinvigorate the power of rich men. Rich men are more likely to enter the parliament thanks to the sheer power of money and vote-buying, which became a real curse for the country in the past decade. Indeed, the number of single mandate candidates running this round (almost 10 candidates per seat) might be indicative of the above concern.

However, even under the proportional system rich businessmen found their way into the parliament, either by sponsoring entire parties like Kyrgyzstan and Mekenim Kyrgyzstan or buying off seats in the party lists. Thus, the continuous oligarchization of Kyrgyzstani politics operates independently of constitutional designs, rendering democratization via the emergent party system ever more ephemeral. The process of oligarchization is related to political economy whereby large business seek political positions in order to increase their assets by accessing to state contracts. Rich men view elections and accession to the parliament as a medium to continue business and enhance their capital, and not to conduct politics. That is why despite the regime’s control over the parliament and repressions against individual deputies, electoral politics remains attractive to many. This explains the high competitiveness of parliamentary elections in Kyrgyzstan: 14 parties took part in 2015, 16 in 2020, and 21 in 2021.

However, it is too early to conclude whether the mixed system and the election of pro-presidential parties with a minority opposition would lead to an immediate closure of the political system, typical to post-revolutionary cycles in the past. Among single mandate candidates, surely next to the rich men, there are also several prominent representatives from liberal professions such as lawyers, journalists, and activists who have better chances to stand alone than on a party list. Since the authorities have never had full control over the electoral process, these individuals might constitute a critical, if even marginal, voice in the future parliament.

Can you describe, briefly, the changes to the parliament made by the constitutional referendum earlier this year?

In fall 2020, Sadyr Japarov initiated constitutional changes, which were voted through via referendum by 31 percent of the voting population participating. The new constitutional design moved away from the semi-parliamentary rule toward a presidential system in which the president can be elected for two five-year terms. The parliament’s influence over the formation and course of the government is heavily reduced while the number of seats are decreased by 25 percent percent. The electoral system is also changed from a proportional to a mixed one, whereby 54 seats will be distributed among political parties and 36 in single mandate districts.

One must note, however, that public calls to reduce both the size of the parliament and the influence of oligarchic parties came long before the accession of Japarov and were linked to an extremely negative image that the party system enjoyed among lay people. Many citizens demanded the return of the majoritarian system as a possibility to restore the lost relationship between politicians and society, so much needed in times of the pandemic and severe economic crisis. In that regard, Japarov’s proposed changes echoed positively among impoverished rural people but less so among the tiny urban middle class.

What is your perception of how Kyrgyz citizens feel about the election and about parliament more broadly? As the region moves into winter, many expect electricity shortages and other problems to arise. Will such problems have serious political implications?

One reason why the electoral campaign has been passive this time is because people are busy with coping strategies that would help them to make through the winter and energy crisis. People are preoccupied with a high rate of inflation, increased prices for foods and fuel, unemployment, and energy shortages. Everyone expects that things will get worse after the election when the government will no longer hold back prices and electricity cuts.

The present year has already been full of intense political events and people want finally to address economic issues, especially that the Kyrgyz economy is recovering very slowly from the pandemic (1 percent GDP growth according to the early estimates). In general, there is a predictable state of apathy and fatigue within society typical to post-revolutionary phases.

Finally, President Japarov still enjoys a credit of trust among 35 percent of the population (per IRI polls in September 2021). If there will be any social discontent, it will be linked more to the energy crisis and high prices than electoral outcomes. People from settlements around the capital, Bishkek, have already began blocking roads in response to recent electricity cuts and Japarov’s popularity will depend on how he manages these economic challenges.

What do you think Kyrgyzstan’s biggest challenges are? Is the present political system equipped to manage those challenges?

Regime durability is never dependent only on the political arrangements with elites, and people’s perceptions of rigged elections are tied to real and perceived economic performances and corruption levels. Both indicators were significant prior to the October uprising of 2020. Just within 1.5 years of the pandemic, the rate of poverty again reached more than 30 percent, thus nullifying a decade of economic reforms and donor aid.

The continuous detrimental effects of the coronavirus on the economy, restrictions imposed on Kyrgyz labor migrants in Russia and Kazakhstan (which contribute the equivalent of more than 30 percent of GDP), and the acute energy crisis have an equal say in Japarov’s consolidation of power. Yet the recent dramatic reshuffling of the government sends mixed messages. On the one hand, the government was able to recruit several strong ministers but on the other hand it fired an important layer of mid-ranked bureaucrats whose knowledge was important not only to carrying out future reforms but to ensure the daily life of the state machine. The neoliberal logic of reducing the state bureaucracy will only exacerbate the institutional fragility, set in motion by previous revolutions, and will negatively impact the government’s ability to reform.